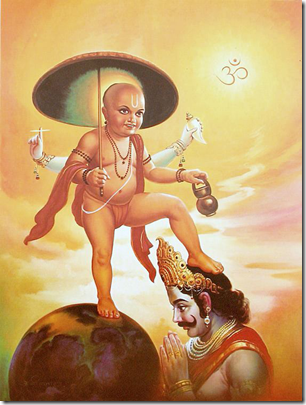 Vamana is described in the Puranas as the fifth Avatar of Vishnu, and the first incarnation of the Second Age or Treta yuga. He is the first Avatar to appear without
anthropomorphic features, although as a dwarf Brahmin. He is also known as Upendra.

Vamana was born to Aditi and Kashyapa. He is the twelfth of the Adityas. Vamana is also the younger brother of Indra.

Vamana as Trivikrama, depicted having three legs, one on the earth, a second raised in the heavens and a third on Bali's head.

The Bhagavata Purana describes that Vishnu descended as the Vamana avatar to restore the authority of Indra authority over the heavens, as it had been taken by
Mahabali, a benevolent Asura King. Bali was the grandson of Prahlada, the son of Hiranyakshipu.

Vamana, in the guise of a short Brahman carrying a wooden umbrella, went to the king to request three paces of land. Mahabali consented, against the warning of his
guru, Sukracharya. Vamana then revealed his identity and enlarged to gigantic proportions to stride over the three worlds. He stepped from heaven to earth with the
first step, from earth to the netherworld with the second. King Mahabali, unable to fulfill his promise, offered his head for the third. Vamana then placed his foot and
gave the king immortality for his humility.

In worshiping Mahabali and his ancestor Prahláda, he conceded sovereignty of Pátála, the netherworld. Some texts also report that Vamana did not step into the
netherworld, and instead gave its rule to Bali. In giant form, Vamana is known as Trivikrama.

Just before King Mahavali was pushed out of this earth, he was given permission by Vamana to visit his people once a year. The Onam festival is a celebration of
welcoming Mahabali home to his lost kingdom. During this festival, beautiful floral decorations are made in every house and boat races are held throughout Kerala. A
twenty-one-course feast is the most important part of the Onam festival.

Jainism
Jainism also describes Vamana. In its scripture, an ill natured man has contention with Jain Munis, which results in the king banishing him from the kingdom. He
traveled to a rival kingdom and managed to gain the favor and trust of its king, and is granted a wish. He asked to be made King for 4 months during Chaturmas, a holy
time for the Jains. The evil man orders that he must be allowed a bite of every meal in Jain Muni, thus not allowing them not eat for the rest of the day as the food would
be considered contaminated. The Jain Shravaks and Shravikas, recognizing his intent, consulted Vamana, the dwarf and avatar who had the capability to change his size.

Dressed up as a tiny Brahman, he went to the house of the evil Raja while he peformed a pooja. Near its end, the practitioner must give something to those present. He asked the dwarf what he wished, and Varana replied that wanted three feet of land. The King consented. Vamana then grew so large that one foot covered the planet, another the heavens, and so there was no where to place the third. The evil king then realized his mistake, and in shame bowed his head down for the third footstep of Vamana.

Vamana taught King Mahabali that pride should be abandoned for advancement in life, and that wealth should be appreciated as it can easily disappear. Vamana then
took the form of Mahavishnu and was pleased by King Mahabali's determination to keep his promise, despite the curse of his spiritual master and losing his wealth.

Vishnu named the King Mahabali since he was a Mahatma (great soul). He allowed Mahabali to return to the spiritual sky to join Prahlada, the demoniac Hiranyakashipu's
pious son, and other divine beings. Mahavishnu also declared that Mahabali would be able to rule the universe in the following yuga. Mahabali was the grandson of
Prahlada, with his father being Virochana, who was killed in a battle with the Devas.

Mahabali is supposed to return every year to the land of his people, to ensure that they are prosperous.

In Sikhism
Vamana is discussed in the Guru Granth Sahib, the sacred text of Sikhism.

On page 1390 of the Guru Granth Sahib, Vamana is mentioned as the "enticer" of Baliraja.

In the Ramayana
According to the Adhyatma Ramayana It is also said that Vamana is the guard of the gate of Bali's underworld realm Sutala and will remain so forever. Tulsidas'

Ramayana too declares that Vamana became the "dwarpal" (gate-defender) of Bali.

It is said that Mahabali attained Moksha by atmanivedinam. Krishna in the Sri Rūpa Gosvāmī's Bhakti-rasāmrta-sindhuh says that Mahabali came to Him or attained Him.

Some traditions also hold that Vamana was an avatar of Ganesha.