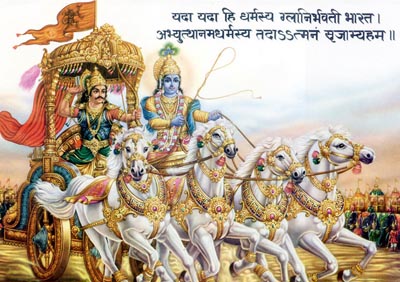 According to legend, Mahabharata  was written down by the Elephant god named Ganesha under the instructions of Sage Ved Vyasa.Mahabharata is a very sacred epic of hindus.Its longest Sanskrit epic ever written, Mahabharata has a collection of more than 74,000 verses, divided into 18 books. The Mahabharata story is much revered in India and basically among the Hindus. The Mahabharata contains the Bhagawad Gita, the famous gospel of duty that was taught to the great warrior, Arjuna by Lord Krishna. The Mahabharata dwells on the aspect of the important goals of a human being in his mortal life. The epic aims at making people realize the relation between the individual and the society and how they both are inter dependent on each other. Read on further a summary of Mahabharata, the greatest epic ever.

Dhritarashta and Pandu were born to Bhisham's brothers. Dhritarashta was born blind and though the elder, he had to forfeit his claim to the throne due to this physical defect. Pandu became king. Of the two brothers Dhritarashta married Gandhari, whereas Pandu, the younger had two wives, Kunti and Madri. Gandhari was so devoted to her husband that she bandaged her eyes, not to enjoy anything that she could not share with her royal husband, and thus remained voluntarily blind for life. She became the mother of the Kouravs, 100 in total, whereas Kunti got three sons and Madri two.

One day while hunting, Pandu accidentally killed the wife of a sage, who got enraged and cursed Pandu that if ever he had intercourse with a woman, he would die instantly. Pandu renounced his crown to become a hermit and went to the jungle with his two wives, Kunti and Madri. But one day, Pandu couldn't resist himself and had intercourse with Madri and thus died. Madri immolated herself and walked into her husband's funeral fire leaving behind her two sons Nakul and Sahadev in custody of Kunti who already had three sons Yudhishthir, Bheem and Arjun. On Pandu's death Dhritarashter became the king and the five sons of Pandu, known as the Pandavs grew up in the guardianship of Kunti. The five Pandav princes were educated along with Kourav boys under the supervision of Bhisham and the patronage of Dhritarashter. Drone, though a Brahmin was a very skilful and efficient teacher, who taught them the art of archery and the various techniques of warfare.

Yudhishthir, the eldest of the Pandavs, was so righteous that he gained the name Dharamputr. Bheem was a giant in physical strength. Arjun was handsome and the most skilful archer. Dharamputr was the beloved of the people and being the eldest among the 105 princes, was naturally, and by his right too, the heir to the throne. Duryodhan, the eldest of the Kouravs, however was jealous of the Pandavs and tried every means to destroy them. When Yudhishthir was proclaimed king, Duryodhan could not sit quiet and watch. Dhritarashter loved all the 105 princes alike, and there was no partiality in his mind between his own sons and the nephews, the Pandavs. The great blind royal father, came under the bad influence of Duryodhan and, though directly not an evil-doer, was in sympathy with his son's disappointments and sorrows.

Duryodhan's plan to kill the Pandavs cunningly giving poison to Bheem, burning down the lac-house etc., failed miserably. Bheem was strong enough to digest the poison. The Pandavs were warned in time by their uncle Vidur and so in the darkness of the night the five brothers along with their mother escaped into the jungle from the burning lac-house. After their miraculous escape from the lac-house, they did not return to the palace. They roamed about in the guise of Brahmins with their mother. Every one including the Kouravs believed them to be dead.

During that time, they heard of the Swayamvara of Droupadi. The qualification to marry her lay in the extraordinary skill of archery in hitting a moving target. Arjun easily won. Everybody congratulated the winner, and discovered that it was Arjun. Thus the Pandavs were found out, He took his bride to their hut and called to his mother to come outside and see what he had brought. Instead of doing so, she answered back "My dear children, whatever it be, you share it among yourselves". Therefore, Droupadi became the common wife of all the five Pandavs. Krishna, who was also present, at the marriage ceremony became a great friend of the Pandavs from then onwards. On Bhisham's advice, the kingdom was divided into two parts. Naturally the better half was taken away by the Kouravs. Still, the others built a wonderful city in their own half and called it Indraprastha. Duryodhan watching the increasing prosperity of the Pandavs and could contain himself no longer. He openly challenged Dharamputr for a game of dice, Sakuni, deceit in human form, was the uncle of the Kouravs. He played for them. Inevitably Dharamputr lost everything - his kingdom, his brothers and also his wife.

Not satisfied with this gain, Duryodhan tried to insult Droupadi in public. By Lord Krishna's grace, nothing disastrous happened. Dhritarashter, fearing that this might bring unforeseen calamities begged Droupadi to take whatever she wanted. She asked for the freedom of her husbands. It was granted. Dhritarashter due to his excessive love for the eldest son was blind to what is right and what is wrong. So again Duryodhan invited Dharamputr for another game of dice, and the bet was that the losers would live in the forest for 13 years without any claim to the kingdom, the last year however to be spent incognito. But if in the thirteenth year, they were detected, again a round of 13 years' exile; and this would go on forever.

Dharamputr lost again. During the twelve years in the forests, the Pandavs visited many holy places. They had many interesting adventures at this time. One of them led to Hanuman's friendship and grace. Arjun is called Kapidhvaja as he keeps on his flag the emblem of Hanuman. Krishna visited them now and then. Arjun, at the advice of Vyasa, practiced penance, propitiated Siva and got from Him the mighty weapon, the Pasupatastra. He propitiated also the other gods lndra, Agni, Varuna and others and got from all of them very powerful weapons. Thus the twelve years were not wasted but spent in securing the divine weapons, which would become useful later on.

In the 13th year, hiding all their weapons in the hollow of a tree in a burial ground, all the Pandavs with Droupadi went to the palace of the king of the Viratas and stayed there as servants. Duryodhan was making frantic efforts to discover them. When he heard about the strange murder of Kichaka the brother-in-law of the king, he concluded that the Pandavs must be in the Virata country. So the Kouravs attacked the Viratas, with apparent purpose of carrying away its cattle-wealth. Of course the Pandavs took part in the battle, but when they were recognized as Pandavs the time limit of thirteen years had already passed.

Dharamputra Yudhishter was fond of peace, and was ever against any quarrel, much less war. So he sent Krishna as a messenger to Hastinapura to claim his kingdom back from Duryodhan. But Duryodhan had by this time come to regard Indraprastha as his own. He not only refused to give their kingdom back, but refused to give even 5 houses for the five brothers to live! War had to be declared. This is the great war fought at Kurukshetra to decide the right of claim. The hundred Kouravs, Bhisham, Drone, Asvathama, etc., were on one side and the Pandavs, Krishna, Drupada, etc., were on the other. Krishna did not actually fight. He was the charioteer of Arjun and hence He is called Parthasarathy. Krishna was very impartial. He gave his army to the Kouravs and himself offered to serve the Pandavs. The Kourav and the Pandav armies arrayed themselves for the war. The Kouravs planned their attacks under the supervision of Bhisham, and under Bheem's management the Pandava army marched into formation. This is the point at which Arjun has second thoughts about fighting in the battle. Krishna gives Arjun good advise that brings back his war-spirit. This advice is known as: The Bhagvad-Gita .

All the Kourava princes died in this battle, and Yudhishthir became king. He continued to reign until he felt that he had completed his life's work. Then he renounced the throne and set out for heaven with the other Pandavs and their wife, Droupadi. With them also went a dog which represented Dharma, the god of duty and moral law. After more adventures, the Pandavs were finally united in heaven.

This story, which forms the main theme of the Mahabharat, makes up only about a quarter of the poem. The Mahabharat contains many other popular stories, including the tales of Nala and Damayanti, Savitri and Satyawan, Rama, and Shakuntala. The battle of Kurukshetra offers an opportunity to discuss military strategy, there is also a mention of a board game Chaturanga  from which the modern day Chess originated. But the underlying theme of the Mahabharat concerns moral duty and right conduct. The long and complex dispute that divides the royal family of Bharat affords an opportunity to explain the duties and conduct expected of a king. It also shows the ideals of behavior for subjects, soldiers, religious hermits, and people suffering misfortune.

Sage Ved Vyasa is traditionally regarded as the author of the Mahabharat, but he is more likely to have been its compiler. The epic seems to be a collection of writings by several authors who lived at various times. The oldest parts are probably about 3,000 years old, while others can be traced to as late as AD 500. The importance of Krishna as the main god of this epic developed in Hindu thought between 200 BC and AD 200. As a result, the Mahabharat can be used to trace the spread and development of Vaishnavite thought in Hinduism. The god Vishnu became a very personal deity for his worshippers through his appearance as Krishna, the adviser and friend of Prince Arjun in the Mahabharat. About 1,300 greatly varying manuscripts of the Mahabharat survive today. All of them show the poem in its later form because the earliest of them goes back only to the 1400's.

The most famous addition to the Mahabharat is the Bhagvad-Gita .It occurs in the sixth book and is now the most widely recognized of Hinduism's sacred texts. The Bhagavad Gita tells how Arjun, the third of the Pandav prince, has misgivings about whether he should be fighting his cousins, the Kouravas. Krishna, speaking with the authority of the god Vishnu, persuades him that his action is just, and then Arjun's military skill becomes a deciding factor in the ensuing Pandav victory. The teachings of the Bhagavad-Gita are fundamental to Hinduism.
Comments:
Back