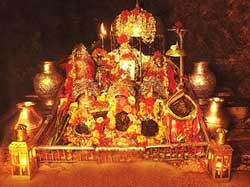 Tirth yatra or pilgrimage reins an evergreen form of travel in India. For thousands of years, the spiritual minded have embarked on a journey of lifetime to become closer to God.India is one of the most religiously diverse nations in the world, with some of the most deeply religious societies and cultures. The country has one of the oldest continuously operating pilgrimage traditions in the world. The practice of pilgrimages is deeply entrenched in the Indian psyche and the number of pilgrimage sites are very large. Thus, the subcontinent may be considered as a continuous sacred space.
Rig Veda and Atharva Veda are the earliest source of information regarding pilgrimages. These sacred texts have reverently mentioned about travel to mountain valleys and the confluences of rivers and the merits obtained from such travels.

As time elapsed, the number of pilgrimage sites and their importance increased. Now, religious pilgrimages are considered to be an essential aspect of every individual's life. Let us get to know few of the important religious places of India :-