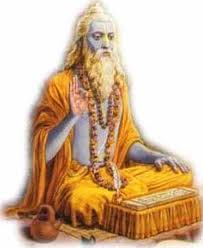 The Puranas (Sanskrit 'ancient', since they focus on ancient history of the universe) are part of Hindu Smriti. These religious scriptures discuss varied topics like devotion to God in his various aspects, traditional sciences like Ayurveda, Jyotish, cosmology, concepts like dharma, karma, reincarnation and many others.Sage Vyasa is credited with compilation of Puranas from age Yuga to age, and for the current age, he has been identified and named Krishna Dvaipayana, the son of sage Parashara. According to tradition they were written by Vyasa at the end of Dvapara Yuga, while modern scholarship dates them to the latter half of the first millennium AD.

Sage Vyasa is credited with compilation of Puranas from age Yuga to age, and for the current age, he has been identified and named Krishna Dvaipayana, the son of sage Parashara. According to tradition they were written by Vyasa at the end of Dvapara Yuga, while modern scholarship dates them to the latter half of the first millennium AD.

One of the main objectives of the Puranas was to make available the essence of the Vedas to the common man, and the Vedas were basically meant not for the scholars but for the ordinary man. They bring forth the Vedic knowledge and teachings by way of myths; parables, allegories and stories; legends; life stories of kings and other prominent persons; and chronologies of historical events. The Puranas unfolds the principles of Hinduism in a very simple way.

In all these Puranas the goddess Lakshmi is given a laudable place without any sectarian dispute. In the Vaishnavite Puranas, Shiva starts telling the efficacy of Vishnu to the Goddess Parvati. While Shaiva mythology places goddess Parvati, the consort of Shiva, as one half of His body (ardha naareeshvara tattva), Vaishnavites place the Goddess Lakshmi in the heart of Vishnu itself, as if it were a lotus (hridaya kamala). This is to depict the inseparable union of Universal purusha and prakriti, seed and field, or male and female.

Puranas are named after the three main forms of Brahman: Brahma, the Creator; Vishnu, the Protector of Life and Humanity; and Shiva, the Destroyer. Search those with the bar on the left to learn more.

Among all the Puranas, the Bhagavata Purana is the best known Purna.

Puranic cosmology describes numerous worlds, planets and planes of existence (loka). Of the multitude of worlds, heaven (Svarga) and hell (Naraka) stand out as nearest and most relevant to our own planet, the Earth. Svarga, or heaven, is the planet of the demigods, or devas, ruled by King Indra. On Svarga, the ability to enjoy physical senses is enhanced while life in Naraka, the netherworld ruled by the King of Justice, Dharmaraj (Yama) is subjected to pain and misery. The Puranas talk about seven levels of the Netherworld. It should be noted that both heaven and hell are temporary abodes for life and once the Karma that is responsible for birth in heaven and hell is exhausted, the soul transmigrates to other forms and worlds of existence.

There are many variations and different levels of the temporal planets as seen by different Puranas and often describe the nature of the phenomenal universe in various ways which may look conflicting.

Three of the other most important worlds in Puranic Cosmology are the Satyaloka, the realm of Brahma, the highest plane of existence where souls of extraordinary karma reside before attaining moksha, the Vaikuntha, the realm of Vishnu, from where there is no return to material worlds and Shivaloka, where worshippers of Shiva enjoy eternal bliss.