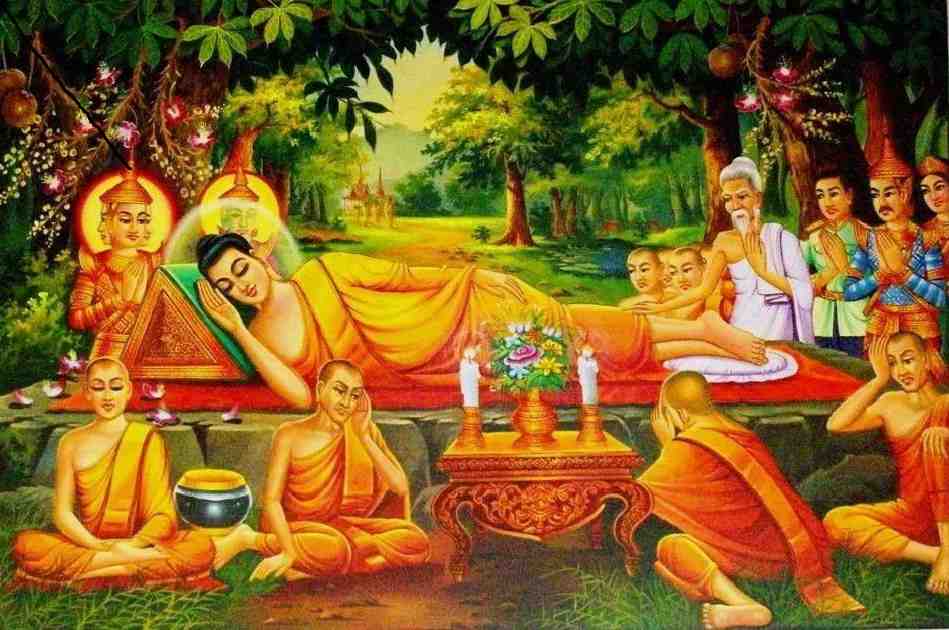 Buddhism is based on three concepts: dharma (the doctrine of the Buddha, his guide to right actions and belief); karma (the belief that one's life now and in future lives depends upon one's own deeds and misdeeds and that as an individual one is responsible for, and rewarded on the basis of, the sum total of one's acts and act's incarnations past and present); and sangha, the ascetic community within which man can improve his karma. The Buddhist salvation is nirvana, a final extinction of one's self. Nirvana may be attained by achieving good karma through earning much merit and avoiding misdeeds. A Buddhist's pilgrimage through existence is a constant attempt to distance himself or herself from the world and finally to achieve complete detachment, or nirvana. The fundamentals of Buddhist doctrine are the Four Noble Truths: suffering exits; craving (or desire) is the cause of suffering; release from suffering can be achieved by stopping all desire; and enlightenment [Source: Tourism of Cambodia]

Buddhists believe that life is full of misery and is ultimately is unreal. The cycle of birth and rebirth continues because of attachment and desire to the "unreal self." Meditation and good deeds, it is thought, will ultimately end the cycle and help the individual to achieve Nirvana, a state of blissful nothingness. To achieve this one must look inward and gain control of the mind and find internal peace. To achieve this takes time and is an evolutionary process that takes place in stages through many lifetimes and cycles or birth, death and rebirth to attain the "real soul" within a person which is in a constant state of flux.

Buddhism is a generally tolerant, non-prescriptive religion that does not require belief in a supreme being. Buddhists believe that the only thing that matters is the inward self; that the goal of Buddhism is to reach a state of nothingness; and human beings are compositions of five temporary states---physical form, sensation, perception, volition and consciousness---all of which disappear after death. Buddhist deny the existence of an individual soul and tell their followers they must transcend this egocentric view to reach nirvana. In its purist forms, Buddhism has no beginning and no end, no Creation and no Heaven and no soul. For this reason has Buddhism has been called a religion without God.

1.life is full of suffering, death, sickness and the loss of loved ones;

2.life is perpetuated by reincarnation (rebirth);

3.suffering is caused by desire (particularly physical desire and the desire for personal fulfillment) and liberation from rebirth occurs with the elimination of desire;

4.Eight steps ("The Eightfold Path") are necessary to live a good life on earth;

5.the only one way to escape suffering is the way of Buddha;

6. this path leads to nirvana;

7. salvation comes with faith in Buddha and practice of Buddha law ( Dharma ) as preached by a community of monks (the Sangha).