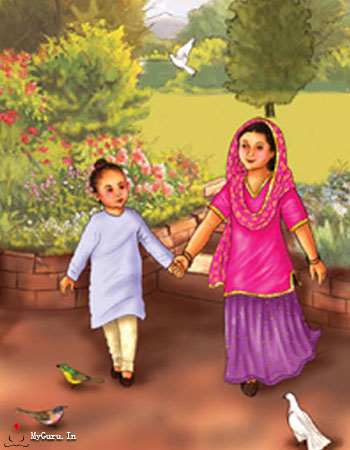 Bebe Nanaki (1464–1518) was the elder sister of Guru Nanak Dev, the founder of Sikhism, and an important religious figure. She is known as the first Gursikh and was the first to realize her brother\'s "spiritual eminence".

History
Bebe Nanaki and her brother were the children of Mehta Kalu and Mata Tripta. Born in the city of Chahal, Lahore, Bebe Nanaki was named by her grandparents who named her Nanaki after the word Nanakian, meaning the home of your maternal parents. Bebe and Ji are added to her name as a sign of respect. Bebe is used in regards to an older sister and Ji given to anyone you want to show your respects to. Bebe Nanaki was married off at an early age at 11 years old. In those days it was customary to be married at such a young age. She was the wife of Jai Ram in 1475.

Brother and Sister
Bebe Nanaki had an immense adoration for her brother and was the first to recognize his "enlightened soul". She was 5 years his elder but played the role of a mother to him. She not only protected him from their father but she loved him unconditionally. Guru Nanak Dev was sent to live with Bebe Nanaki when he was only 15 years old, because his father was frustrated with him. To instil his independence, she searched for a wife for him. Bebe Nanaki along with her husband found a woman, Mata Sulakhni, for Guru Nanak Dev to marry. Since Bebe Nanaki had no children of her own she loved and helped raise her brother\'s children, Sri Chand and Lakhmi Chand.
Bebe Nanaki is known as being Guru Nanak Dev\'s first follower. She was eternally devoted to him and his cause. As well as she is known for inspiring Guru Nanak Dev in using music as a instrument of devotion to God. Knowing he had musical talent she bought him a Rebab to help him further his music.

Joti Jot
Bebe Nanaki died in 1518. As one of her last wishes she willed her brother, Guru Nanak Dev, to be by her side during her last days. Her last breaths were enlightened with the Japji Sahib which was recited to her.