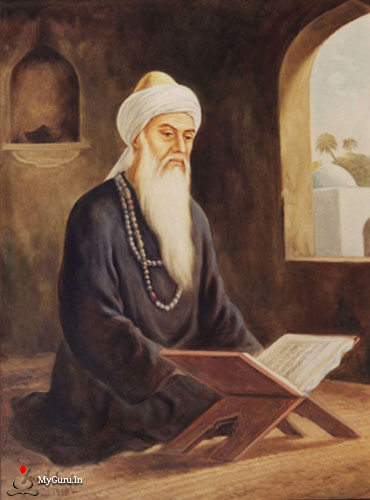 Khwaja Fariduddin Masud Ganjshakar was a Sufi and Muslim missionary in Punjab region of South Asia. Hazrat Fariduddin Mas\'ud Ganjshakar (1173–1266)or (1188 (584 Hijri) – 7 May 1280 (679 Hijri)), commonly known as Baba Farid was a 12th-century Sufi preacher and saint of the Chishti Order.
Fariduddin Ganjshakar is generally recognised as the first major poet of the Punjabi language, and is considered one of the pivotal saints of the Punjab region. Revered by Muslims and Hindus, he is considered one of the fifteen Sikh bhagats, and selections from his work are included in the Guru Granth Sahib, the Sikh sacred scripture. He is buried in Pakpattan, in present-day Punjab, Pakistan.

History
This article does not cite any references or sources. Please help improve this article by adding citations to reliable sources. Unsourced material may be challenged and removed. (March 2013)
Baba Farid was born in 1173 or 1188 AD (584 Hijri) at Kothewal village, 10 km from Multan in the Punjab region of the Chauhan dynasty in what is now Pakistan, to Jamal-ud-din Suleiman and Maryam Bibi (Qarsum Bibi), daughter of Sheikh Wajih-ud-din Khojendi.
Baba Farid’s ancestors were from a town called Aush, south of Fergana south east of Andijan. Farid’s grandfather (Qadi Shuaib) left Kabul and took refuge in Lahore under the Ghaznavid Sultan in 1125.

Farid\'s genealogy is a source of dispute, as some trace his ancestors back to al-Husayn while others trace his lineage back to the second Caliph Umar ibn Khattab. Baba Farid\'s ancestors came from Kufa, while Abdullah ibn Umar died during the Hajj and was buried in Makkah. The family tree of Baba Fareed traces through Abu Ishaq Ibrahim bin Adham, whose ancestors came from Kufa.
Baba Farid received his early education at Multan, which had become a centre for education; it was here that he met his murshid (master), Qutbuddin Bakhtiyar Kaki, a noted Sufi saint, who was passing through Multan, from Baghdad on his way to Delhi. Upon completing his education, Farid left for Sistan and Kandahar and went to Mecca for the Hajj pilgrimage at the age of 16.
Once his education was over, he shifted to Delhi, where he learned the doctrine of his master, Quṭbuddin Bakhtiyar Kaki. He later moved to Hansi, Haryana. When Qutbuddin Bakhtiyar Kaki died in 1235, Farīd left Hansi and became his spiritual successor, but he settled in Ajodhan (the present Pakpattan, Pakistan) instead of Delhi. On his way to Ajodhan, while passing through Faridkot, he met the 20-year-old Nizāmuddīn, who went on to become his disciple, and later his successor (khalifah).

Baba Farid married Hazabara, daughter of Sultan Nasiruddin Mahmud. The great Arab traveller Ibn Batutah visited him. He says that he was the spiritual guide of the King of India, and that the King had given him the
village of Ajodhan. He also met Baba Farid\'s two sons. His shrine (darbar) is in Pakpattan
Baba Farid\'s descendants, also known as Fareedi, Fareedies and Faridy, mostly carry the name Faruqi, and can be found in Pakistan, India and the diaspora. His descendants include the Sufi saint Salim Chishti, whose daughter was Emperor Jehangir\'s foster mother. Their descendants settled in Sheikhupur, Badaun and the remains of a fort they built can still be found.

Poetry
Farida bhumi rangavala manjhi visula ba
Fareed, this world is beautiful, but there is a thorny garden within it.
Farida jo tain marani mukiaN tinhan na mare ghumm
Fareed, do not turn around and strike those who strike you with their fists.
Farida ja lab tha nehu kia lab ta karha nehu
Fareed, when there is greed, what love can there be? When there is greed, love is false.
Kale maide kapre, kala maida wais,
Gunahin bhariya main phiran, Lok kahain darvesh
Laden with my load of misdeeds, I move about in the garb of black garments.
And the people see me and call me a dervish.
Gallin cikkar dur ghar, nal piyare ninh,
ChallaN te bhijje kambli, rahaN tan tutte ninh.
My promise to my love, a long way to go and a muddy lane ahead
If I move I spoil my cloak; if I stay I break my word.

Legacy
One of Farid\'s most important contributions to Punjabi literature was his development of the language for literary purposes. Whereas Sanskrit, Arabic, Turkish and Persian had historically been considered the languages of the learned and the elite, and used in monastic centres, Punjabi was generally considered a less refined folk language. Although earlier poets had written in a primitive Punjabi, before Farid there was little in Punjabi literature apart from traditional and anonymous ballads. By using Punjabi as the language of poetry, Farid laid the basis for a vernacular Punjabi literature that would be developed later.

Among the famous people who have visited his shrine over the centuries are the famous scholar-explorer Ibn Battuta, who visited in 1334, and the Founder of Sikhism, Guru Nanak Dev, who met the then head of the shrine, Sheikh Ibrahim, twice, and his meeting led to the incorporation of 112 couplets (saloks) and four hymns by Baba Farid, in the Sikh Holy Book, the Guru Granth Sahib, by the fifth Guru, Arjan Dev in 1604. Guru Nanak was familiar with the verse of Baba Farid, and not only includes these verses in the Holy Book, but even comments on some of them. These verses are known to the Sikhs as the Farid-Bani; Guru Arjan Dev also added eighteen saloks from the Sikh Gurus, which add commentary to various of Baba Farid\'s work.
The city of Faridkot bears his name. According to legend, Farid stopped by the city, then named Mokhalpur, and sat in seclusion for forty days near the fort of King Mokhal. The king was said to be so impressed by his presence that he named the city after Baba Farid, which today is known as Tilla Baba Farid. The festival Baba Sheikh Farad Agman Purb Mela\' is celebrated in September each year from (21–23 Sep, 3 days), commemorating his arrival in the city. Ajodhan was also renamed as Farid\'s Pak Pattan, meaning \'Holy Ferry\'; today it is generally called Pak Pattan Sharif.
Faridia Islamic University, a religious madrassa in Sahiwal, Punjab, Pakistan, is named after him, and in July 1998, the Punjab Government in India established the Baba Farid University of Health Sciences at Faridkot, the city which itself was named after him.
There are various explanations of why Baba Farīd was given the title Shakar Ganj (\'Treasure of Sugar\'). One legend says his mother used to encourage the young Farīd to pray by placing sugar under his prayer mat. Once, when she forgot, the young Farid found the sugar anyway, an experience that gave him more spiritual fervour and led to his being given the name.

Tomb
The small tomb of Baba Farid is made of white marble with two doors, one facing east and called the Nuri Darwaza or \'Gate of Light\', and the second facing north called Bahishtī Darwaza, or \'Gate of Paradise\'. There is also a long covered corridor. Inside the tomb are two white marbled graves. One is Baba Farid\'s, and the other is his elder son\'s. These graves are always covered by sheets of cloth called Chadders (the green coloured chadders are covered with Islamic verses), and flowers that are brought by visitors. The space inside the tomb is limited; not more than ten people can be inside at one time. Ladies are not allowed inside the tomb, but the late Benazir Bhutto, then prime minister of Pakistan, managed to enter inside when she visited the shrine.

Shrine
The Shrine (mazar/mazar) is vast and spacious, located in the city of Pakpattan, otherwise Pakpattan Sharif. At first his tomb and shrine were constructed under the supervision of Saint Nizamuddin Auliya/Khawaja Nizamuddin Aulia. The shrine is made entirely of marble. Some years back it was partly made of marble and bricks. Charity food called Langar is distributed all day by visitors and the Auqaf Department, which administrates the shrine. The shrine is open all day and night for visitors. The shrine has its own huge electricity generator that is used whenever there is power cut or loadshedding, so the shrine remains bright all night, all year round. There is no separation of male and female areas but a small female area is also there. There is a big new mosque in the shrine. Thousands of people daily visit the shrine for their wishes and unresolvable matters; for this they vow to give to some charity when their wishes or problems are resolved. When their matters are solved they bring charity food for visitors and the poor, and drop money in big money boxes that are kept for this purpose. This money is collected by the Auqaf Department that looks after the shrine.

On 25 October 2010, a bomb exploded outside the gates of the shrine, killing six people.

Death anniversary and Urs
Every year, the saint\'s death anniversary is celebrated for six days in the first Islamic month of Muharram, in Pakpattan, Pakistan. The Bahishti Darwaza (Gate of Paradise) is opened only once a year, during the time of the Urs fair. Hundreds of thousands of pilgrims and visitors from all over the country and the world come to pay homage. The door of the Bahishti Darwaza is made of silver, with floral designs inlaid in gold leaf. This "Gate to Paradise" is padlocked all year, and only opened for ten days from sunset to sunrise in the month of Muharram. Some followers believe that by crossing this door all of one\'s sins are washed away. Some critics say it is unholy to pass through this door only with this intention. Others argue that it is good to pass this door with a resolution not to commit sins in the future. During the opening of the Gate of Paradise, extensive security arrangements are made to protect people from stampedes. In 2001, 27 people were crushed to death and 100 were injured in a stampede. A large brick tomb adjacent to the main tomb is the resting place of Fariduddin\'s siblings. The Urs is celebrated every year from the fifth through the tenth of Muharram. Some of his personal belongings were taken by his descendant Sheikh Salim to a fort he built for his family in Sheikhupur, Badaun, where they are preserved in a trunk called \'pitari\'. To this day it is taken out in a procession for the first six days of Muharram.

Mehfil-e-Sama (Qawwali)
One of the significant features of the daily life of the shrine is Qawwali. It is performed all day at some part of the shrine, but at night it attracts a huge gathering. Every Thursday evening, there is a big Mehfil-e-Sama just outside the tomb that lasts all night and attracts hundreds of people. Many famous and popular Qawwals (Qawwali singers) of the country participate in the Mehfil. Many listeners become so mesmerised that they start dancing a traditional religious dance called Dhamaal. The first Thursday evening of every lunar month attracts extra thousands of people, making the shrine jam packed.