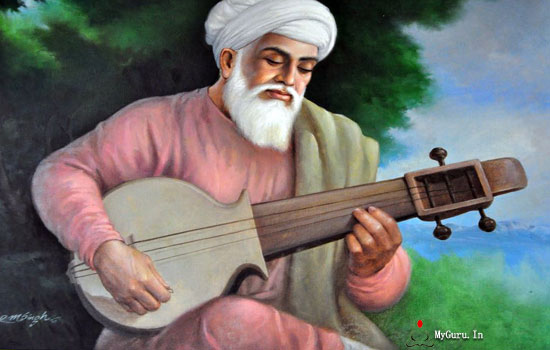 Bhai Mardana Ji (1459–1534) was the first follower and longtime companion of Guru Nanak Dev, the founder of Sikhism. He was with Nanak in all of his journeys across India and Asia. Mardana was a Muslim, born to a Mirasi couple, Badra and Lakkho, of Rai Bhoi di Talwandi, now Nankana Sahib of Pakistan.

History
Guru Nanak Dev and Mardana
It are said that Mardana first contacted Guru Nanak to seek help as many people in his family were dying at a young age. Guru Nanak gave him the assurance that henceforth people in his clan will not die early. It is said that the name Mardana came from this assurance- Mar- Da- Na meaning \'Does not die\'.
Guru Nanak and Mardana were brought up in the same village. The Miharban Janam Sakhi says that Mardana was ten years elder to Guru Nanak and was his companion since his childhood days. It further states that Mardana sang hymns written by Kabir, Trilochan, Ravidas, Dhanna and Bern. According to Ratan Singh Bhangu, Prachin Panth Prakash, Guru Nanak as a small boy gave Mardana a string instrument improvised from reeds to play on while he sang the hymns.
When Guru Nanak took charge of the granaries and stores of the Nawab of Sultanpur Lodhi, he became known for his generosity. Mardana, was by then married and had two sons and a daughter, Mardana went to meet Guru Nanak as Guru Nanak\'s father wanted news of his son, Mardana never went back from his trip and was with Guru Nanak from then on. He used to play the rabab or rebeck as Guru Nanak spoke his words about God.
When Guru Nanak planned to travel the world to spread his message, he wanted Mardana to accompany him, Mardana wanted to marry off his daughter before doing so, Bhai Baghirath a disciple of Guru Nanak helped Mardana materially to enable the daughter\'s marriage and allow Mardana to accompany Guru Nanak.
The chronicles of their travels uses Mardana to show worldly doubts and bring forth Guru Nanak\'s message, in many situations Mardana is portrayed as doubtful and wanting clarifications in every situation. The Puratan Janam Sakhi tells of these situations.

In 1534, Mardana fell ill at Kartarpur The sickness was intense and it was clear that he would not survive. As he was born a Muslim, Guru Nanak is said to have asked him how to dispose of his body, and Mardana is said to have left the choice to his Guru. Then the Guru is supposed to have asked, "Shall I make a tomb to make you famous in the world?" Mardana is said to have replied that having given him freedom why did the Guru want to put his body in a tomb? The next morning Mardana is said to have died.
It is said that The Guru had his body consigned to the River Ravi, and had hymns sung and Karah Parshad, the sacrament, distributed among the mourners. He consoled Mardana\'s family including his son Shahzada, asking them not to weep as Mardana had returned to his heavenly home.

Salok
Mardana also wrote poetry. One of his compositions appears in the Guru Granth Sahib in Bihdgare ki Var along with two others of Guru Nanak\'s addressed to Mardana. As per the composition Mardana is convinced that an evil body may be cleansed of sin in sangat (GG, 553).