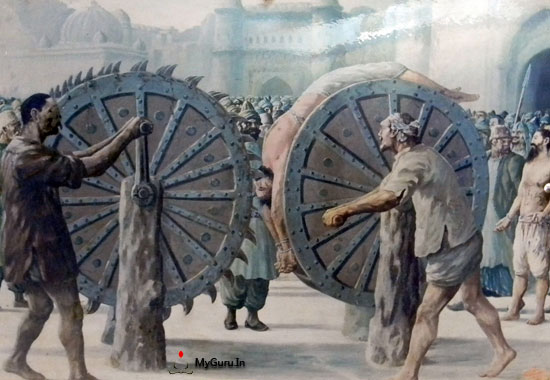 Bhai Subeg Singh, a resident of village Jambar near Lahore, He was well educated and scholar of Persian language and man of high moral character.During the reign of Zakaria Khan, Bhai Subeg Singh was a government contractor at Lahore. He mediated between the government and the Sikhs in 1733 A.D., when the Dal Khalsa was given an estate. During 1745 A.D., when the Governor Zakria Khan could not pass urine, Bhai Subeg Singh was sent by him to the Dal Khalsa. As advised by the leader, the Governor had kept on passing urine when hit on the head with the shoe of Bhai Taru Singh.

History
Earlier to this, he had been a police officer (kotwal) in charge of police force of Lahore. During his tenure as police offices he ensured peace and security to the people. Because of his conduct and hyman approach, residents of Lahore and Governor Zakaria Khan held him in high esteem. In view of this, he had faced no problem inspite of Zakaria Khan’s intensive drive to completely finist the Sikh community. The Sikhs had vowed to free the country from the yoke of cruel rulers, and stop the invadors from North West once and for all. With God’s name on their lips and Guru’s grace, they were happily riding horses and living in jungles, river Deds ravines and desert, always lying in wait to strike and punish ruthless and cruel rulers. Who can finish such selfless warriors? Zakaria Khan miserably failed to achieve his objective of finishing the Sikh community, and was thus looking for a way out of this impase. He wanted to enter into an agreement with the Sikh leadership to mantain peace in Punjab. He had got permission from Emperor of Delhi on this account.
Through the good offices of S. Subeg Singh and using him as an inter-mediatery, Zakaria Khan offered the Sikhs:
1. Rs. One Lakh of revenue from Kanganpur, Jhapal and Dayalpur areas.
2. ‘A royal dress and title of Nawab to the Jathedar, as a mark of respect.
In return, Zakaria Khan wanted Sikhs to cease hostilities against the government.

Bhai Subeg Singh approached the Sikhs with this offer. The Sikhs were not ready to accept this offer. Their chief S. Darbara Singh while refusing the offer of Nawabship said. “Sri Guru Gobind Singh had predicted that Sikhs will establish their just rule in Punjab.” When no Sikh leader came forward to accept govt.’s offer, S.Subeg Singh requested the sikhs to accept the available offer of truce and utilise the truce period to improve upon their existing organisational set up so as to face worst times ahead. He further requested them not to summarily turn down govt.’s gesture. S. Subeg Singh succeeded in persuading Sikhs to accept the government offer. The robe of honour and the title of Nawab was bestowed on S. Kapur Singh, who was engaged in the act of operating the manual fan to provide some respite from the heat to the assembly of Sikhs present at that time. Thus S. Kapur Singh became Nawab Kapur Singh. This showed how in Sikhism the humble worker was respected and rewarded for selfless service to the community.

Nawab Zakaria Khan expressed his happiness and gratitude to S. Subeg Singh on his return from this successful mission S, Subeg Singh had extended his helping hand to Zakaria Khan on some othe occasions as well when Zakaria Khan had behaved well and in a reasonable manner.

The truce between the Sikhs and Zakaria Khan’s government did not las long. However, the Sikhs utilised the truce period to improve upon their fire power and striking ability. Zakaria Khan started his old game of exterminating the Sikh community and the sikhs once again moved to the places of their hide outs in jungles, ravines, deserts and river beds.

S. Shahbaz Singh, the brilliant son of S. Subeg Singh, was studying persian language from a Muslim Kazi at a school. At the age of eighteen, he turned out to be very healthy and handsome youngman. His teacher was immensely impressed by the intelligence and conduct of this student. To serve his own self interest, the Kazi planned to convert the boy into Islam and then make him his son in law by marrying him to his daughter. To achieve his objective, the Kazi started lecturing on the qualities and supremacy of Islam over other religions and tried to prepare Shahbaz Singh for conversion of religion. However, Shahbaz Singh was well informed about the virtues of his own Sikh religion, its philosophy and its practical approach as demonstrated by great Gurus.

Apart from his knowledge of his own religion, he was educated about Islam and Hunduism by his parents. He was proud of being a Sikh boy. When the Kazi persisted in his approach to fulfill his ambition, Shahbaz Singh started reacting actively by proving the supremacy of Sikhism over Islam whenever the Kazi initiated talk about supremacy of Islam over Sikhism. Shahbaz Singh kept his parents informed about all that was happening between him and the Kazi, his teacher at school.

After failing to persuade Shahbaz Singh to get converted to Islam, the Kazi started using threats to achieve his objective. He told Shahbaz Singh that if he did not agree to conversion to Islam he would lodge a serious complaint against him with the Governor and get him executed.

When even threats proved futile, the Kazi registered a false complaint with the Governor Zakaria Khan charging Shahbaz Singh of insulting Prophet Mohammed by pointing out various deficiencies in the teaching of Islam and contained in the sacred book of Islam.

The Kazi also took the help of notorious anti Sikh Muslim magistrate of Lahor, to fulfill his nefarious designs. Together, they prepared and submitted a long list of baseless charges against S. Subeg Singh and his son Shahbaz Singh to the Governor, Zakaria Khan.

The ungrateful Zakaria Khan, forgetting the co-operation extended by S. Subeg Singh at difficult junctures ordered the arrest of both Shahbaz Singh and Subeg Singh. They were kept in separate jail cells. There was no chance of Sikhs getting justice by the judiciary of the time.

Shahbaz Singh was conveyed the false news that his father had been executed and that he could save his youthful life by adopting Islam as his religion. Both father and the son, remained stead fast in sticking to their faith inspite of mischievious propanganda launched by government officials. They prepared themselves for the in evitable, by reciting hymns from Guru Granth Sahib, recalling the brave deeds of Gurus and devout Sikhs who had laid down their lives for upholding the cause of opressed and defending their faith in the past. They prayed to the Almighty to give them strength to uphold their faith and principles dear to them.

Suddenly at that juncture Khan Bahadur Zakaria Khan died before he could execute the two stead-fast Sikhs, Shahbaz Singh and Subeg Singh. Zakaria Khan’s son Yahia Khan, became the Governor of Lahore and proved to be more aggresive towards Sikhs. S. Subeg Singh and Shahbaz Singh were produced before Yahia Khan, who too offered them the choice between conversion to Islam or death by torture.

Bothe father and the son remained stead fast in their faith and preferred death to conversion as Muslims. The Kazi was asked to specify the punishmen. He promptly specified death on wheels for the two brave Sikhs. Yahia Khan gave his approval without a moments thought to these brutal means of execution for the two Sikhs.

Both Bhai Subeg Singh and Shahbaz Singh were tied on separate set of wheels opposite each other. The wheels were operated and the steel blades started ripping the flesh of the two brave Sikhs of Guru Going Singh. Blood started flowing all over their bodies and wheels.

The wheels were halted for a while and the Kazi again told the two Sikhs that their lives could still be spared if they changed their minds but he got a stunning negative reply from the two brave Sikhs. The wheels were set rolling again. Bhai Subeg Singh and Shahbaz Singh kept reciting Gurbani and laid down their lives in front of cruel rulers and wet eyes of some in the crowd of people who were watching the proceedings with dismay and disbelief.

The news of execution of these two peace loving Sikhs spread like wild fire throughout the city of Lahore and in the neighbouring jungles and sancturies of brave Sikhs. Bands of Sikh warriors came out of adjoining jungles and pounced upon the city of Lahore. They attacked the cruel ruling officials and after puting them to death disappeated again into the jungles. They thus took revenge of execution of Bhai Subeg Singh, Shahbaz Singh from the government officials.
Thus warriors Sikhs also proved that they would not allow the cruel rulers to have their way and that they would soon end the cruel rule and would take over the control of Punjab from rulers.