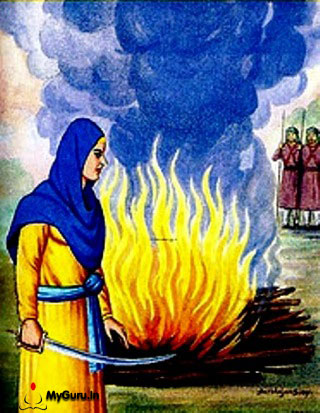 Bibi Harsharan Kaur: The Final Shaheed of the Battle of Chamkaur

History
Bibi Harsharn Kaur Ji was a brave Sikh woman who gave her life to fulfill her obligation. She faced odds and did not allow dangers to stand in her way. She is well known for responding to the call of her duty ignoring her own safety. In the battle of Chamkaur a village sixteen kilometers from the river Sirsa, Guru Gobind Singh jee and 40 starving Singhs battle the Mughal army. The battle which took place in Chamkaur's mud fort lasted 72 hours and saw the loss of many Mughal soldiers and also 36 of Guru Gobind Singh jee's companions along with the two elder Sahibzadas Ajit Singh, and Jujhar Singh. Fighting an army of hundreds of thousands, Guru Gobind Singh jee gave an exhibition of his battle skills. Guru jee, following the orders of the Panth Khalsa (in the form of the Punj Pyaaray) left the fort along with Bhai Daya Singh, Bhai Maan Singh and one other Singh, after giving his clothes to Bhai Sangat Singh jee to wear. Only Bhai Sangat Singh and Bhai Sant Singh fought the battle to its end. They too were martyred. Seeing Guru jee's clothes on Bhai Sangat Singh, the Mughals were ecstatic and taking him to be Guru Gobind Singh, cut off his head and took it to Delhi.
In every village it was announced that Guru Gobind Singh had been killed, "Look here at his chopped off head! His family is also finished. His two sons were killed in the battle and the two younger ones will also die abandoned. The revolution has been crushed. No one should go to the Chamkaur Fort. No one should cremate the dead Singhs."
A tight cordon was put around the Fort. As the soldiers were going from village to village making their announcement, the people were retreating in terror into their homes. However, in village Khroond, a daughter of Guru Gobind Singh, Bibi Harsharan Kaur, asked for her mother's permission to peform the final rites for the Shaheeds. Her old mother replied, "it is total darkness outside and soldiers are everywhere around the fort, how will you even go near?"

Hearing this, Kalgeedhar's lioness daughter replied with resolve "I will avoid the soldiers and perform the cremation, and if need be, I'll fight and die."
The mother gave her courage and hugged her daughter and then explained the maryada to follow for the cremation. After performing Ardaas, Bibi Harsharan Kaur left for the Chamkaur Fort.
The battlefield which saw iron smashing against iron, the bellows of elephants, the trotting of hooves and calls of "Kill! Capture!", was now totally silent and enveloped in complete darkness. In such a situation, the 16 year old girl Bibi Harsharan Kaur avoided the guards and arrived at the Fort. She saw that bodies were lying everywhere and distinguishing between Sikh and Mughal was very difficult. She still had faith and began to find arms with Karas and torsos with kachheras and heads with long kesh. As she found a body, she would wipe the face of every shaheed. Both Sahibzadas and about 30 shaheeds were found and then she began to collect wood. Fearing the approaching light of dawn, Bibi Harsharan Kaur worked very quickly and soon prepared a pyre. She then lit the fire.

Bibi jee: I am the daughter of Guru Gobind Singh
Officer: What are you doing here?
Bibi Jee: I am cremating my martyred brothers.
Officer: Don't you know about the order that coming here is a crime?
Bibi Jee: I know it.
Officer: Then why have you disobeyed that order?
Bibi Jee: The orders of a false king do not stand before the orders of the Sachay Patshah (True King)
Officer: Meaning?
Bibi Jee: Meaning that I have respect for the Singhs in my heart and with the Guru's grace I have done my duty. I don't care about your King's orders.

The next day the cordon around the Fort was lifted because it was clear that the Sahibzadas and most of the Shaheed Singhs had been cremated. The ancestors of the Phulkiaan family, Rama and Triloka, then cremated whichever Singhs remained. The story of Bibi Harsharan Kaur reached Guru Gobind Singh jee Mahaaraaj in Talvandee Sabo (Damdama Sahib).
Upon hearing of her daughter's martyrdom, the old mother thanked Akaal Purakh. She said, "my daughter has proven herself worthy." The story of the cremation of the Chamkaur Shaheeds will forever serve as a glowing star of inspiration for all Singhs and Singhnees.