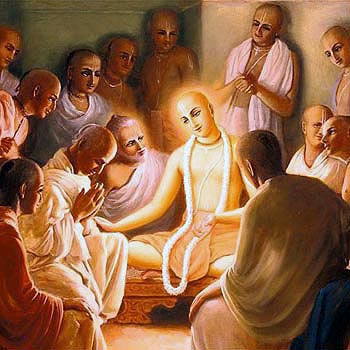 Chaitanya Mahaprabhu (1486–1534) was a Vaishnava saint and social reformer in eastern India (specifically present-day Bangladesh and states of West Bengal, Bihar, Jharkhand, Manipur, Assam, and Orissa of India) in the 16th century, worshipped by followers of Gaudiya Vaishnavism as the full incarnation of Lord Krishna. Sri Krishna Chaitanya was a notable proponent for the Vaishnava school of Bhakti yoga (meaning loving devotion to Krishna/God) based on the philosophy of the Bhagavata Purana and Bhagavad Gita. Specifically, he worshipped the forms of Krishna, popularised the chanting of the Hare Krishna maha mantra and composed the Siksastakam in Sanskrit. His line of followers, known as Gaudiya Vaishnavas, revere him as an Avatar of Krishna in the mood of Radharani who was prophesied to appear in the later verses of the Bhagavata Purana.

He was also sometimes referred to by the names Gaura (Sanskrit for golden one) due to his light skin complexion, and Nimai due to his being born underneath a Neem tree. There are numerous biographies available from the time giving details of Chaitanya's life, the most prominent ones being the Chaitanya Charitamrita of Krishnadasa Kaviraja Goswami, the earlier Chaitanya Bhagavata of Vrindavana Dasa (both originally written in Bengali but now widely available in English and other languages), and the Chaitanya Mangala, written by Lochana Dasa.

According to Chaitanya Charitamrita, Nimai was born on the full moon night of February 18, 1486, at the time of a lunar eclipse. His parents named him 'Vishvambhar'. Sri Chaitanya was the second son of Jagannath Mishra and his wife Sachi Devi who lived in the town of Nabadwip in Nadia, West Bengal. Chaitanya's ancestry is a contentious issue between the people of Orissa and West Bengal with Shree Chaitanya having family roots in Jajpur, Orissa, from where his grandfather, Madhukar Mishra had emigrated to nearby Bengal.

In his youth, Chaitanya Mahaprabhu was primarily known as an erudite scholar, whose learning and skills in argumentation in his locality were second to none. A number of stories also exist telling of Chaitanya's apparent attraction to the chanting and singing of Krishna's names from a very young age, but largely this was perceived as being secondary to his interest in acquiring knowledge and studying Sanskrit. When traveling to Gaya to perform the shraddha ceremony for his departed father Chaitanya met his guru, the ascetic Ishvara Puri, from whom he received initiation with the Gopala Krishna mantra. This meeting was to mark a significant change in Mahäprabhu's outlook and upon his return to Bengal the local Vaishnavas, headed by Advaita Ächärya, were stunned at his external sudden 'change of heart' (from 'scholar' to 'devotee') and soon Chaitanya became the eminent leader of their Vaishnava group within Nadia.

After leaving Bengal and receiving entrance into the sannyasa order by Keshava Bharati, Chaitanya journeyed throughout the length and breadth of India for several years, chanting the divine Names of Krishna constantly. He spent the last 24 years of his life in Puri, Orissa, the great temple city of Jagannath. The Suryavanshi Hindu emperor of Orissa, Gajapati Maharaja Prataparudra Dev, regarded the Lord as Krishna's incarnation and was an enthusiastic patron and devotee of Chaitanya's sankeertan party. It was during these years that Lord Chaitanya is believed by His followers to have sank deep into various Divine-Love (samādhi) and performed pastimes of divine ecstasy (bhakti).

According to beliefs of orthodox followers Caitanya Mahaprabhu united in himself two aspects: ecstatic devotee of Krishna and Krishna himself in inseparable union with Radha. According to the hagiographies of 16th c. authors he has exhibited his Universal Form identical to that of Krishna on a number of occasions, notably to Advaita Ācārya and Nityānanda Prabhu.

Chaitanya has left one written record in Sanskrit called Siksastakam.

The statements of amnaya (scripture) are the chief proof. By these statements the following nine topics are taught.
Krishna is the Supreme Absolute Truth.
Krishna is endowed with all energies.
Krishna is the ocean of rasa (theology).
The jivas (individual souls) are all separated parts of the Lord.
In bound state the jivas are under the influence of matter, due to their tatastha nature.
In the liberated state the jivas are free from the influence of matter, due to their tatastha nature.
The jivas and the material world are both different from and identical to the Lord.
Pure devotion is the practice of the jivas.
Pure love of Krishna is the ultimate goal.
Krishna is the only lovable blessing to be received.

Despite having been initiated in the Madhvacharya tradition and taking sannyasa from Shankara's tradition, Chaitanya's philosophy is sometimes regarded as a tradition of his own within the Vaishnava framework - having some marked differences with the practices and the theology of other followers of Madhvacharya. He took Mantra Upadesa from (Isvara Puri) and Sanyasa Diksha from Kesava Bharathi. Both these gurus are of Sankarite order of Advaita.

Chaitanya Mahaprabhu is not known to have written anything himself except for a series of verses known as the Siksastaka, or "eight verses of instruction", which he had spoken, and were recorded by one of his close colleagues. The eight verses created by Mahaprabhu are considered to contain the complete philosophy of Gaudiya Vaishnavism in condensed form. Chaitanya requested a select few among his followers (who later came to be known as the Six Gosvamis of Vrindavan) to systematically present the theology of bhakti he had taught to them in their own writings. The six saints and theologians were Rupa Goswami, Sanatana Goswami, Gopala Bhatta Goswami, Raghunatha Bhatta Goswami, Raghunatha dasa Goswami and Jiva Goswami, a nephew of brothers Rupa and Sanatana. These individuals were responsible for systematizing Gaudiya Vaishnava theology.

Narottama Dasa Thakur, Srinivasa Acarya and Syamananda Pandit were among the stalwarts of the second generation of Gaudiya Vaishnavism. Having studied under Jiva Goswami, they were instrumental in propagating the teachings of the Goswamis throughout Bengal, Orissa and other regions of Eastern India. Many among their associates, such as Ramacandra Kaviraja and Ganga Narayan Chakravarti, were also eminent teachers in their own right.

The festival of Kheturi, presided over by Jahnava Thakurani,  the wife of Nityananda Prabhu, was the first time the leaders of the various branches of Chaitanya's followers assembled together. Through such festivals, members of the loosely organized tradition became acquainted with other branches along with their respective theological and practical nuances. Around these times, the disciples and descendants of Nityananda and Advaita Acharya, headed by Virabhadra and Krishna Mishra respectively, started their family lineages (vamsa) to maintain the tradition. The vamsa descending from Nityananda through his son Virabhadra forms the most prominent branch of the modern Gaudiya tradition, though descendants of Advaita, along with the descendants of many other associates of Chaitanya, maintain their following especially in the rural areas of Bengal. Gopala Guru Goswami, a young associate of Chaitanya and a follower of Vakresvara Pandit, founded another branch based in Orissa. The writings of Gopala, along with those of his disciple Dhyanacandra Goswami, have had a substantial influence on the methods of internal worship in the tradition.

From the very beginning of Chaitanya's bhakti movement in Bengal, Haridasa Thakur and others Muslim or Hindu by birth were the participants. This openness received a boost from Bhaktivinoda Thakura's broad-minded vision in the late 19th century and was institutionalized by Bhaktisiddhanta Sarasvati in his Gaudiya Matha in the 20th century. In the 20th century the teachings of Chaitanya were brought to the West by A.C. Bhaktivedanta Swami Prabhupada, a representative of Bhaktisiddhanta Sarasvati Thakura branch of Chaitanya's tradition. Bhaktivedanta Swami founded his movement known as The International Society for Krishna Consciousness (ISKCON) to spread Chaitanya's teachings throughout the world.

Saraswata gurus and acharyas, members of the Goswami lineages and several other Hindu sects which revere Chaitanya Mahaprabhu, including devotees from the major Vaishnava holy places in Mathura District, West Bengal and Orissa, also established temples dedicated to Krishna and Chaitanya outside India in the closing decades of the 20th century. In the 21st century Vaishnava bhakti is now also being studied through the academic medium of Krishnology in a number of academic institutions.

In addition to his deep influences on Hinduism, Chaitanya's cultural legacy in Bengal and Orissa remains deep, with many residents performing daily worship to him as an avatar of Krishna. Some attribute to him a Renaissance in Bengal, different from the more well known 19th century Bengal Renaissance. Salimullah Khan, a noted linguist, maintains, "Sixteenth century is the time of Chaitanya Dev, and it is the beginning of Modernism in Bengal. The concept of 'humanity' that came into fruition is contemporaneous with that of Europe".