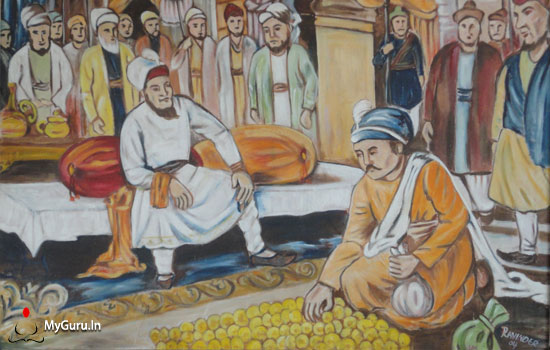 Diwan Todar Mall was a wealthy Hindu, a local businessman from Sirhind, who on the 13 December 1705 performed the cremation of the three martyred bodies of the two younger sons of Guru Gobind Singh, Zorawar Singh aged about 6, and Fateh Singh aged about 9 and their grandmother, Mata Gujari. The Haveli Todar Mal popularly known as Jahaz Haveli or Jahaz Mahal is the 17th-century residence (haveli). Who became the diwan in the court of Nawab Wazir Khan, the Governor of Sirhind, under Mughal Empire.
The haveli is situated in Harnam Nagar, on the Eastern side of Sirhind-Rupnagar Railway Line just 1 km away from Fatehgarh Sahib, and is now being taken over and restored by SGPC with the help of Punjab govt and INTACH.

Architecture
the lavish haveli constructed with made of Sirhindi bricks stand just outside the Mughal Governor Nawab Wazir Khan’s palace, once boasts of a grand reception area to receive and entertain guests and a well laid-out ground complete with a pool and fountains.
This incident occurred after the Sahibzade had been executed by the Mughal authorities on the 12 December 1705 for not renouncing their faith and the death from shock of their grandmother at the news of the sudden and despicable execution of the innocent youngsters. This wealthy merchant had to cover the required ground for cremation with gold coins to get the release of the three bodies.

History
Diwan Todar Mal Jain was an Oswal Jain businessman, and as per account in the Phulkian state gazetteer, he belonged to Kakra village, a few miles from Patiala.
In Sikh history, he is remembered for buying a small piece of land for the cremation of the dead bodies of Mata Gujri, the mother and Sahibzada Zorawar Singh and Baba Fateh Singh, the two younger sons of 10th Sikh Guru, Guru Gobind Singh in 1705 A.D, by paying an exorbitant price to the owner of the land. He had to cover the whole piece of land with gold coins (ashrafis) in a vertical position, as he was asked to vertically place gold coins on the land and only that much land was given to him which he could cover with gold coins. He later also made arrangements for their cremation. But, according to Dr Harjinder Singh Dilgeer, the bodies of all the three were cremated by the descendants of Todar Mall Shahjahani because the latter had already died in 1665-66.

Small Detail of Gold Coin
(Let us look at this in a little detail, say that a gold coin has a diameter of around 3cm and would take up an area of (3 x 3 ) 9cm squared. The land required for the martyred children would be approximately 2.0m by 2.0m a total area of 40,000 cm squared if laid next to each other. Add to this the area required for Mata Ji (2.0m by 1.5m) if the coins were laid horizontally then to cover this area would require around 7800 gold coins. Now, if the coins had to be stacked vertically then possibly 10 coins would be needed to cover the 9cm squared area, so vertically 7800 x 10 coins would be required, or 78,000. That is an awful lot of gold coins today; one can only imagine how much they were worth three hundred years ago. It is safe to say it was probably his life’s savings. Maybe he had to beg and borrow to raise the total amount, who knows, but the fact remains this was truly a noble deed. Todar Mal forsake everything for his love of Guru Gobind Singh, which is the reason why Sikhs hold Dewan Todar Mal in such high esteem.)

Todar Mal, however had to bear the brunt Wazir Khan wrath, and he and his family had to abandon the haveli soon after, and themselves faded into oblivion, with dilapidated building being their only reminde. In the coming years, the haveli fell into rapid disrepair, and collapsed at many place. Though it survived ransacking of Sirhind by Banda Bahadur and during the reign of The Sikh Confederacy, the haveli was left untouched out of respect for Diwan Todar Mal.
Today, Gurdwara Jyoti Swarup now stands at the place where these three martyrs were cremated and the road connecting the two Gurdwaras is known as Dewan Todar Mal Marg. Even today Diwan Todar Mal is deeply respected by the Sikhs and a Diwan Todar Mal Jain Memorial Hall, congregation hall has been constructed at historic Gurudwara Fatehgarh Sahib by SGPC.