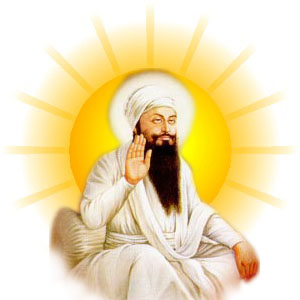 Life of Guru Arjan Dev Ji :
Guru Arjan Dev Ji was the fifth of the eleven Sikh Gurus, the eleventh being the living Guru, Guru Granth Sahib and the first Sikh martyr. He was born in Goindval, Punjab the youngest son of Guru Ram Das Ji and Bibi Bhani, the daughter of Guru Amar Das Ji.

Guru Arjan Sahib Ji lived as the Guru of Sikhism for a quarter of a century and accomplished much during his service to humanity. Guru Arjan Sahib Ji completed the construction of Amritsar and founded other cities such as Taran Taran and Kartarpur. The greatest contribution he made to the Sikh faith was to compile all of the past Gurus' writings along with selected writings of other saints from different backgrounds which he considered consistent with the teachings of Sikhism into one book, now the holy scripture: The Guru Granth Sahib. It is, perhaps, the only script which still exists in the form first published by the Guru.

Guru Arjan Sahib Ji organised the Masand system, a group of representatives who taught and spread the teachings of the Gurus and also received the Dasvand, partial offering of a Sikh's income that Sikhs paid to support the building of Gurdwara Sahib, Langar originally intended to share with sense of love, respect and equality, still an important element today in any Gurdwara. The Langars were open to any visitors and were designed from the start to stress the idea of equality and a casteless society.

Guru Arjan, like all the Sikh Gurus, clearly embodies the light of Guru Nanak through teachings and acts. Guru Arjan clearly knew how the importance of Guru Nanak's message is for every state of life and to every condition of society. Continuing the efforts of Guru Ramdass, Guru Arjan Dev Ji established Amritsar as a primary site for all Sikhs, and people on earth, as a center for great spiritual experience. The city became populous and a great place of pilgrimage for Sikhs.

Compiling the Adi Granth, Guru Arjan Sahib Ji gave Sikhs an example of religious and moral conduct, as well as a rich body of sacred poetry of high spiritual esteem. His starting of collection of offerings by way of Masand system, in a systematic way, accustomed them to a regular government. He traded in horses, though not extensively, and encouraged his followers to follow his example, to be as zealous in trade as they were in their faith.

Guru Arjan Sahib Ji became famous among his pious devotees and his biographers dwell on the number of Saints and Holy men who were edified by his instructions. He was equally headed by men in high positions. During his time, the teaching and philosophy of Guru Nanak took a firm hold on the minds of his followers.

The economic well-being of the country is closely linked with the monsoon. With a view to alleviating the sufferings of the peasants, Guru Arjan Sahib Ji helped the villagers in digging six-channel Persian wheel (Chhehrta) wells, which irrigated their fields. Chheharta is a living monument of his efforts in this direction. Guru Arjan Sahib Ji was caring and loving, he was also willing to give to the poor suffer with sorrow.

Joyti Jot of Guru Arjan Dev Ji :
Guru Arjan Dev Ji included the compositions of both Hindu and Muslim saints which he considered consistent with the teachings of Sikhism. In 1606, the Muslim Emperor Jahangir ordered that he be tortured and sentenced to death after he refused to remove all Islamic and Hindu references from the Holy book.

He was made to sit on a burning hot sheet while boiling hot sand was poured over his body. After enduring five days of unrelenting torture Guru Arjan Dev Ji was taken for a bath in the river. As thousands watched he entered the river never to be seen again.

Guru Arjan Dev's Personality :
Guru Arjan Sahib Ji was a great social worker, humanist, architect, poet, philosopher, organizer and above all a martyr. He lived his whole life for the Panth. He was the first martyr of South Asia who was executed for his religious missionary activities.