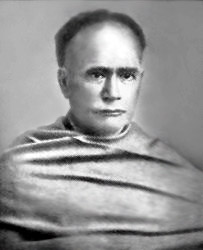 Ishwar Chandra Vidyasagar, (26 September 1820 – 29 July 1891), born Ishwar Chandra Bandopadhyay, was an Indian Bengali polymath and a key figure of the Bengal Renaissance. Vidyasagar was a philosopher, academic, educator, writer, translator, printer, publisher, entrepreneur, reformer, and philanthropist. His efforts to simplify and modernize Bengali prose were significant. He also rationalized and simplified the Bengali alphabet and type, which had remained unchanged since Charles Wilkins and Panchanan Karmakar had cut the first (wooden) Bengali type in 1780. He received the title "Vidyasagar" ("Ocean of learning" or "Ocean of knowledge") from the Calcutta Sanskrit College (where he graduated), due to his excellent performance in Sanskrit studies and philosophy. In Sanskrit, Vidya means knowledge or learning and Sagar means ocean or sea. This title was mainly given for his vast
knowledge in all subjects which was compared to the vastness of the ocean.

Early life
Ishwar Chandra was born to Thakurdas Bandyopadhyay and Bhagavati Devi at Birsingha village, in the Ghatal subdivision of Paschim Midnapore District, on
26 September 1820. at the age of 6 he went to calcutta.In Calcutta, Ishwar started living in Bhagabat Charan's house in Burrabazar, where Thakurdas had already been staying for some years. Ishwar felt at ease amidst Bhagabat's large family and settled down comfortably in no time. Bhagabat's youngest daughter Raimoni's motherly and affectionate feelings towards Ishwar touched him deeply and had a strong influence on his later revolutionary work towards the upliftment of women's status in India.

His quest for knowledge was so intense that he used to study on street light as it was not possible for him to afford a gas lamp at home. He cleared all the examinations with excellence and in quick succession. He was rewarded with a number of scholarships for his academic performance. To support himself and the family Ishwar Chandra also took a part-time job of teaching at Jorashanko.

In the year 1839, Ishwar Chandra Vidyasagar successfully cleared his Law examination. In 1841, at the age of twenty one years, Ishwar Chandra joined the
Fort William College as a head of the Sanskrit department.

Teaching career
Vidyasagar in Calcutta and many other reformers in Bombay set up schools for girls. Vidhyasagar was associated with other reformers, who founded schools for girls like Ramgopal Ghosh, Madan Mohan Tarkalankar, Dakshinaranjan Mukherjee, John Elliot Drinkwater Bethune and others. When the first schools were opened in the mid nineteenth century, many people were afraid of them. They feared that schools would take away girls from home and prevent them from doing their domestic duties. Moreover, girls would have to travel through public places in order to reach school. They thought that girls should stay away from public spaces. Therefore, most educated women were taught at home by their liberal fathers or husbands.

In 1841, Vidyasagar took the job of a Sanskrit pandit (professor) at Fort William College in Kolkata (Calcutta). In 1846, he joined the Sanskrit College as Assistant Secretary. A year later, he and a friend of his, Madan Mohan Tarkalankar, set up the Sanskrit Press and Depository, a print shop and a bookstore.

While Vidyasagar was working at the Sanskrit College, some serious differences arose between him and Rasamoy Dutta who was then the Secretary of the College, and so he resigned in 1849. One of the issues was that while Rasamoy Dutta wanted the College to remain a Brahmin preserve, Vidyasagar wanted it to be opened to students from all castes.

Later, Vidyasagar rejoined the College, and introduced many far-reaching changes to the College's syllabus.

In the face of opposition from the Hindu establishment, Vidyasagar vigorously promoted the idea that regardless of their caste, both men and women
should receive the best education. His remarkable clarity of vision is instanced by his brilliant plea for teaching of science, mathematics and the philosophies of John Locke and David Hume, to replace most of ancient Hindu philosophy. His own books, written for primary school children, reveal a strong emphasis on enlightened materialism, with scant mention of God and religious verities – a fact that posits him as a pioneer of the Indian

Renaissance.
A compassionate reformist
Ishwar Chandra Vidyasagar felt very sorry and compassionate whenever he saw poor and weak people were in distress. Though he was very outspoken and blunt in his mannerisms, yet Vidyasagar had a heart of Gold. He was also known for his charity and philanthropy as "Daya-r sagar" or "Karunar Sagar" – ocean of kindness, for his immense generosity. He always reflected and responded to distress calls of the poor, sufferings of the sick and injustice to humanity. While being a student at Sanskrit College, he would spend part of his scholarship proceeds and cook paayesh (rice pudding) to feed the poor and buy medicines for the sick.

Later on, when he started earning, he paid fixed sums of monthly allowances to each member of his joint family, to family servants, to needy neighbours, to villagers who needed help and to his village surgery and school. This he continued without break even when he was unemployed and had to borrow substantially from time to time.

Vidyasagar did not believe that money was enough to ease the sufferings of humanity. He opened the doors of the Sanskrit College to lower caste students (previously it was exclusive to the Brahmins), nursed sick cholera patients, went to crematoriums to bury unclaimed dead bodies, dined with the untouchables and walked miles as a messenger-man to take urgent messages to people who would benefit from them.

When the eminent Indian Poet of the 19th century, Michael Madhusudan Dutta, fell hopelessly into debts due to his reckless lifestyle during his stay in Versailles, France, he appealed for help to Vidyasagar, who laboured to ensure that sums owed to Michael from his property at home were remitted to him and sent him a large sum of money to France.

Widow remarriage
Vidyasagar championed the uplift of the status of women in India, particularly in his native place Bengal. Unlike some other reformers who sought to set up alternative societies or systems, he sought, however, to transform orthodox Hindu society "from within". With valuable moral support from people like Akshay Kumar Dutta, Vidyasagar introduced the practice of widow remarriages to mainstream Hindu society. In earlier times, remarriages of widows would occur sporadically only among progressive members of the Brahmo Samāj. The prevailing deplorable custom of Kulin Brahmin polygamy allowed elderly men — sometimes on their deathbeds — to marry teenage or even prepubescent girls, supposedly to spare their parents the shame of having an
unmarried girl attain puberty in their house. After such marriages, these girls would usually be left behind in their parental homes, where they might be cruelly subjected to orthodox rituals, especially if they were subsequently widowed. These included a semi starvation diet, rigid and dangerous daily rituals of purity and cleanliness, hard domestic labour, and close restriction on their freedom to leave the house or be seen by strangers. Unable to tolerate the ill treatment, many of these girls would run away and turn to prostitution to support themselves. Ironically, the economic prosperity and lavish lifestyles of the city made it possible for many of them to have quite successful careers once they had stepped out of the sanction of society and into the demi-monde.

In 1853 it was estimated that Calcutta had a population of 12,718 prostitutes and public women.

Vidyasagar took the initiative in proposing and pushing through the Widow Remarriage Act XV of 1856 in India. He also demonstrated that the system of
polygamy without restriction was not sanctioned by the ancient Hindu Shastras.

Meeting with Sri Ramakrishna
One of the important chapters in the The Gospel of Sri Ramakrishna is the depiction of the meeting between Sri Ramakrishna, the 19th on his philanthropic activities, kindness and compassion and suggested him to do these activities in a selfless spirit. Vidyasagar was himself liberal in his outlook even though he was born in an orthodox Hindu Brahmin family. He was highly educated and influenced by Oriental thoughts and ideas. Ramakrishna in contrast did not have a formal education. According to the gospel Ramakrishna discussed various topics including the world of duality and trascendental nature of Brahman, citing the parables of the salt doll, the wood cutter and the ant and the sugar hill, on discrimination between true and false knowledge, on different manifestations of God's power, on ego and suffering, on power of faith etc.

Accolades
Shortly after Vidyasagar's death, Rabindranath Tagore reverently wrote about him: "One wonders how God, in the process of producing forty million Bengalis, produced a man!" After death, he is remembered in many ways, some of them include:

Vidyasagar Setu
Vidyasagar Setu (commonly known as the Second Hooghly Bridge), is a bridge over the Hooghly River in West Bengal, India. It links the city of Howrah to its twin city of Kolkata. The bridge is named after Ishwar Chandra Vidyasagar.
A fair named Vidyasagar Mela (Bengali: বিদ্যাসাগর মেলা Biddashagor Mêla), which is dedicated to spreading education and increasing social awareness, has
been held annually in West Bengal since 1994. Since 2001, it has been held simultaneously in Kolkata and Birsingha.
There is a reputed college named after him and it is located in college street, Kolkata and a university named Vidyasagar University in Paschim Midnapore.
Rectitude and courage were the hallmarks of Vidyasagar's character, and he was certainly ahead of his time. In recognition of his scholarship and
cultural work the government designated Vidyasagar a Companion of the Indian Empire (CIE) in 18778] In the final years of life, he chose to spend his
days among the "Santhals", an old tribe in India.
There is Vidyasagar Street in Central Kolkata, which is named after him.
The Paschimbanga State Government has established a stadium named after this great man (Vidyasagar Stadium) at Barasat, the district center of Uttar 24 Pargana.