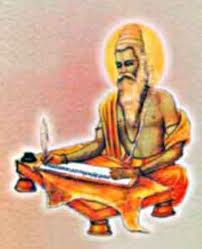 Jaimini was an ancient Indian rishi (sage), who was a great philosopher of the Mimansa school of Indian philosophy. He was the disciple of the great Rishi Veda Vyasa, the son of Rishi Parashara.

Purva Mimamsa Sutras
Jaimini is most known for his great treatise Purva Mimamsa Sutras (“First Reflection”), or Karma-mimamsa (“Study of Ritual Action”), a system that investigates the nature of Vedic injunctions. The text founded the Purva-Mimamsa school of Ancient Indian philosophy, one of the six Darsanas or schools of Ancient Indian philosophy.

Dated to ca. the 3rd century BC, the text contains about 3,000 sutras and is the foundational text of the Mimamsa school. The text aims at an exegesis of the Vedas with regard to ritual practice (karma) and religious duty (dharma), commenting on the early Upanishads. Jaimini's Mimamsa is a ritualist counter-movement to the mysticist Vedanta currents of his day. He was commented upon by Śābara in the early centuries CE.

Jaimini Sutras
The Jaimini sutras, or Upadesha Sutras, is a classic work, rated as next only to the Brihat Parashara Hora Sashtra, to which he gave an extended commentary, thus giving birth to "Jaimini system of astrology".

Other mentions
Samaveda
When Rishi Veda Vyasa divided ancient Vedic hymns into four parts based on their use in the sacrificial rites, and taught them to his four chief disciples – Paila, Vaisampayana, Jaimini and Sumantu, Samaveda was transmitted to rishi Jaimini.

"He divided the Veda into four, namely Rig, Yajur, Sama and Atharva. The histories and the Puranas are said to be the fifth Veda."