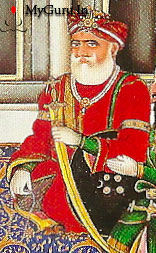 Sardar Raja Mahan Singh Mirpuri (d. 1844) (also spelled Maan Singh "Mirpura"/"Mirpuria") was a famous General in the kingdom of Maharaja Ranjit Singh, and was the second-in-command to the famous General Sardar Hari Singh Nalwa. He was conferred by Maharaja Ranjit Singh the title of Raja for his conquests of Haripur, Nowshehra and Peshawar. The town of Mansehra derives its name from him.

History
He was born a commoner in Gujranwala, in a Muhiyal family belonging to the Ambral branch of the Bali Clan. He was the grandson of Himmat Singh Bali, and his father Data Ram was a counselor to Sultan Mukkarb Khan, the Gakhar Subedar of Gujrat.

Military career and later Life
While in Lahore in search of a job, he happened to participate in a hunting expedition of Maharaja Ranjit Singh, in which he caught the notice of the latter by single-handedly killing a leopard with his sword. Impressed by his valor, the Maharaja had him inducted into the army under the famous General Hari Singh Nalwa.
Mahan Singh played a key role in the battles of Peshawar and Kashmir, and in the 1818 siege of Multan, was seriously wounded two times. He went on to become second-in-command to Hari Singh Nalwa. In April 1837, he was the main defender of the Jamrud Fort, holding out against an invasion by Afghans. In the subsequent battle, Hari Singh Nalwa was done to death but Mahan Singh maintained the news secret until reinforcements arrived from Lahore.
Mai Desan, the widow of Hari Singh Nalwa, adopted Mahan Singh as her son and solemnized his marriage into a Mohan family of Gujranwala according to Muhiyal traditions.
Sardar Raja Mahan Singh he was murdered by his own soldiers in 1844, when mutiny broke out in the Sikh army.

Descendants
Mahan Singh had four sons, named Chhattar Singh, Himmat Singh, Sham Singh and Wadhawa Singh. His death at the hands of mutinying soldiers was avenged by Chhattar Singh, who was himself killed soon after. Himmat Singh\'s assistance to the British in the Indian Mutiny of 1857 on the orders of the Maharaja of Jammu fetched him awards from the latter. The widows of Chhattar Singh and Himmat Singh were later given pensions by the British government along with grants of agricultural land in Districts Jhelum and Gujranwala, and in Mirpur. Sardar Raja Mahan Singh\'s grandson Rai Sahib Bakshi Kartar Singh Bali was Vernacular Secretary in the Government of Kashmir under Maharaja Partap Singh, and President of the All India Mohyal Conference of 1906.