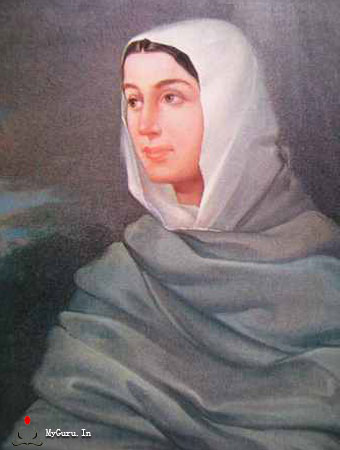 Mata Jito ji birth-date of is unknown, as is the name of her mother. Her father Hari Jas was a resident of Lahore and was a Subhikkhi of the Khatri Clan. In the year 1673, Hari Jas arranged the betrothal of his daughter to Prince Gobind Rai, the son of Mata Gujri and Ninth Guru Teg Bahadar.

Marriage to Tenth Guru:
Mata Jito ji was the first wife of Guru Gobind Singh ji. She was the daughter of Bhai HariJas, a Subhikkhi Khatri of Lahore. The betrothal had taken place in 1673. The father-in-law had desired that the bridegroom should come at the head of a marriage party to Lahore where the ceremony should be performed with due dignity.
The guru\'s maternal uncle Kirpal Chand arranged for meeting place to be set up nearby and tents erected just north of Anandpur close to the village Basantghar, and called the camp Guru ka Lahore. Jito ji\'s family joined Guru Gobind Rai his mother and Uncle and the marriage festivities commenced. The wedding between Jito Ji and Guru Gobind Rai took place the 23rd day of Har, SV year 1734, or on June 21, 1677 A.D. The groom was 11 years old when he married Jito ji. The bride\'s exact age at the time of her marriage to the tenth guru is unknown.
Three sons were born to Mata Jitoji · Jujhar Singh (14 March 1691), Zorawar Singh (17 November 1696) and Fateh Singh (25 February 1699). Mata Jito Ji raised her three sons on the martyrdom tales of their grandfather Guru Tegh Bahadur and great great grandfather Guru Arjan Dev ji. She told them a Sikh never runs from a battle field. It was because of her teachings that all her three sons attained Martyrdom Jujhar Singh when was only 15 years old fighting with Mughals at Chamkaur, Zorawar Singh and Fateh Singh who were only 9 and 6 years old at the hands of Wazir Khan, Mughal Governor of Sarhind, when the young Sahibzades would not convert to Islam.
Mata Jitoji left this world at Anandpur on 5 December 1700, years before the martyrdom of her sons or the events leading to the battle of Chamkaur. The cremation took place at Agampura, near the Holgarh Fort. A memorial shrine now stands upon the spot.

A few weeks after the birth of his youngest son, the tenth guru established the Khalsa order on April 14th during the Vaisakhi spring festival of 1699. Guru Gobind Rai took the name of Singh and created the Panj Pyare, a council of five to administer the immortalizing Amrit to Khalsa initiates. Jito ji entered the initiation ceremony where, turn by turn, while reciting prayers, the five stirred the Amrit nectar in an iron bowl with a double edge sword. Jito ji sweetened the nectar adding bits of puffed cane sugar to the Amrit in the bowl. She then submitted herself for initiation and received the name of Kaur, becoming Ajit Kaur, the first Khalsa woman.

Death and Memorial:
The fateful events leading to the martyrdom of Guru Tegh Bahadur intervened, and in the changed circumstances it was not possible for the young Guru to go to Lahore. Therefore a temporary encampment was raised near the village of Basantgarh, 10 km north of Anandpur, and named Guru ka Lahore where the nuptials were held on 23 Har 1734 Bk/21 June 1677.
On 30th March 1699, Guru Gobind Singh created Khalsa at Anandpur. He declared that this Khalsa will be both Saints as well as Soldiers. When Gobind Singh was preparing amrit (nectar) for initiating the Khalsa, on this occasion, stirring clean water in an iron bowl with a khanda or double-edged sword, Mata Jitoji, as the tradition goes, came with sugar crystals which were dropped into the vessel at the Guru\'s bidding. Sweetness was thus added to the alchemy of steel. Mata Jito ji was the first Khalsa Woman.