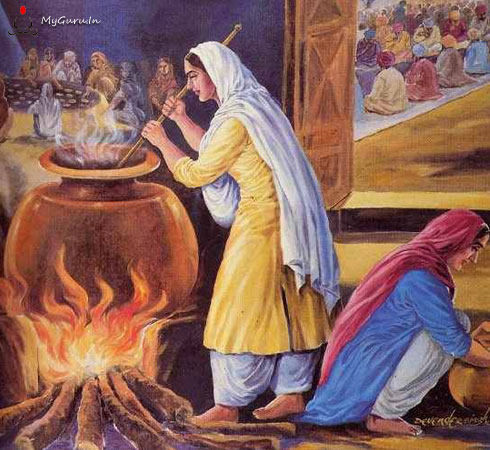 Mata Khivi (1506-1582) was born to Karan Devi17 and Bhai Devi Chand Khatri. Her father was a shopkeeper and moneylender, and was a popular man in the neighbourhood. She inherited all his finest attributes of generosity and congenial spirit. She was married in 1519, when she was 13 years old. Mata Khivi was married to Bhai Lehna for 20 years before he became the second Guru of the Sikhs. There is historical evidence that she had 4 children. Dasu, the eldest was born in 1524. Bibi Amro18 was born in 1532, followed by Bibi Anokhi in 1535 and son Datu in 1537. The family was content and doing well. As the wife of one of the town’s richest men, Khivi must have enjoyed a great deal of respect. Her life was one of luxury and pleasure. Life would have gone on this way, had it not been for her coming under the influence of Mai Bhirai, who told her about Guru Nanak’s teachings. At approximately the same time, Lahina also heard of the Guru through Bhai Jodha, one of Guru Nanak’s earliest disciples. Lahina was a seeker of truth, and his curiosity was aroused. In 1532, shortly after the birth of his first daughter Amro, Lahina set out for his annual pilgrimage. On the way, he broke his journey at Kartarpur to see the Guru. On listening to Nanak speak, Lahina begged to be allowed to stay and become his disciple. He had found the truth he had been seeking, and would never again stray away from it. He served his master with the greatest devotion. He busied himself, sweeping the visitor’s quarters, washing their clothes and helping with the most menial work in fields. As his knowledge and understanding of the new teachings grew, so did the Guru’s affection and approval of his disciple. This created a problem for the Guru’s sons. Increasingly they grew jealous of Lahina, and took no pains to conceal their dislike.19 Without a doubt, this kind of stress and strain would have been very difficult for Lahina’s wife to deal with. There are no records of her thoughts or feelings or how she handled the situation. Had she behaved foolishly during this time, you can be sure that someone would have recorded it.

Life became very busy for Khivi. She took upon herself the onerous task of managing every detail of the langar. Only the best possible ingredients were used, and everyone was treated with utmost courtesy. Her hospitality has been emulated over the centuries and has become the first cultural identity of the Sikhs. She helped the Guru in establishing the infant Sikh community on a stronger footing. She has been described as good natured, efficient, and beautiful and all rounds perfect. She has the distinction of being the only one of the Guru\'s wives to be mentioned by name in Guru Granth Sahib Ji. There she is described as a "good person", "an affectionate mother" and as "one who provides shelter and protection to others."

Khivi did much more than work in the kitchen. She created a loving atmosphere for all whom she came in contact with. Mata Khivi lived for thirty years after her husband\'s death. She continued to serve the community and remained associated with the Guru\'s house in all that time. When Guru Angad passed the succession to Guru Amar Das, his son Datu was very disappointed. Datu’s headaches disappeared and Sikhism was spared another schism, thanks to Khivi’s intervention.24 Khivi continued to manage Guru Amar Das’s kitchen. She was proud of her children till the day she died. Her daughter Amro had married Bhai Jasoo of Basarke village. He was the son of Bhai Manak Chand and nephew of Guru Amar Das.

Khivi did much more than work in the kitchen. She created a loving atmosphere for all whom she came in contact with. She and Guru Angad were very fond of their children. They lavished their love and affection on not only their own, but on any child in the community. Their commitment was so strong that it gave a beautiful example to all who witnessed it. The Guru took great delight in spending time with the children, teaching them a modified version of the Punjabi script which was easier to learn by the illiterate masses. This new script, which was his invention, soon became known as Gurmukhi script. He is credited in popularising this alphabet, in which the Guru Granth Sahib is written. Each day there was special time set aside first to teach the children and delight in their clever ways. Then they would watch the children at play, and often watch wrestling matches together. From the games, the Guru would draw lessons for his congregation. Guru Angad, with the help of Bhai Bala and other disciples, wrote the first "Life" of Guru Nanak, and this work became the first published prose of the Punjabi language.
Lahina was 28 years old at the time, had a wife and two young children. The Guru he had chosen, spoke of the equality of women and advocated a normal family life as the best way to attain salvation. After serving the Guru for some time, he was sent back to Khadur to see his family. His instructions were to take his time and to spend it spreading the word of the new faith to all he met. He did this well, and Guru Nanak was pleased with the reports he heard of him. The reports were so good that Guru Nanak came to his village twice to visit him and to re-inforce his work with his own preaching. Khivi also learnt from her husband, and embraced the new faith wholeheartedly. The women in the village taunted her, saying that her husband was becoming an important holy man, and would, therefore, soon forsake her. She knew she had nothing to worry about, and gave birth to two more children in that period of time.
She had a long productive life. She worked hard and was loved by all. Her good humour and pleasant personality made a large contribution to the spirit of hospitality, which is now considered an essential trait of Sikh culture. She is quite possibly the first woman of her era who ever worked outside her immediate family home and obligations at a time when her children were very young. She handled both roles admirably well. It is time that Sikhs acknowledge her very important contribution.
Mata Khivi, wife of Guru Angad Dev, is the only lady whose name has been mentioned in Sri Guru Granth Sahib. She has been highly praised in one of the hymns composed by Balwand and entered in Guru Granth Sahib at page 967. It goes like this: Balvandd kheevee nek jan jis bahutee chhaao patraalee||

She distributes the bounty of the Guru\'s Langar; the kheer – the rice pudding and ghee, is like sweet ambrosia.
Mata Khivi, daughter of Bhai Devi Chand, a shopkeeper in village Sanghar, in district Amritsar was born 1n 1506.She inherited the finest attributes of generosity and congenial spirit from her father. She was married in 1519 to Bhai Lehna who became Guru Angad Dev afterwards. She was a sweet tempered lady who stood with Lehna in weal and woe. After listening to one of the hymns of Guru Nanak, Lehna decided to see Guru Nanak. Bhai Lehna left his followers when he was taking them to the mountains for idol worship and stayed with Guru Nanak at Karturpur. People taunted Mata Khivi and remarked that her husband had deserted her and had become a hermit. She kept her cool and said,“I shall be happy to live as my husband wishes me to live. “
Khivi had the distinction of meeting five Gurus. She lived to the age of 75 and died in the year 1582. Guru Arjun Dev attended her funeral. Her contributions to the Sikh cause can easily be divided into three parts. The first period was the twenty years of marriage before Guru Angad succeeded Guru Nanak. This period was a test not only for Angad, but for her as well. Any decisions he made affected her very much. Her response would also have affected his actions. She never complained, nor did anything to deter him from his objectives. The second period of her life as wife of the Guru was extraordinary in its devotion and dedication to the cause. The third and last period would be after her husband died. She continued to nourish the Sikh community and to work tirelessly for that which she now believed in with all her heart.
Comments:
नवरात्री Navratri
श्री दुर्गा कवच
Free Kundali Predictions
Todays Panchang
Calulate Your Rashi
Free Tarot Reading
Astro Remedies
Buddhism
Nakshatra Characteristics
श्री साईं बाबा Shri Sai Baba
राशिफल Horoscope
Calculators
जन्मदिन विवरण Birthday Details
स्वप्न विश्लेषण Dream Analysis
प्रश्नावलियाँ Prashnavalis
व्रत & पूजा विधि Vrat & Pooja Vidhi
आरती संग्रह Aarti Sangrah
चालीसा संग्रह Chalisa Sangrah
स्तुति संग्रह Stuti Sangrah
स्त्रोत्र संग्रह Strotra Sangrah
मंत्र संग्रह Mantra Sangrah
कवच संग्रह Kavach Sangrah
सुन्दरकाण्ड Sundarkand
नामावली संग्रह Namavali Sangrah
Vedas
Spiritual Books
Pilgrimage in India
Sms Collection
Thoughts
Inspirations
Baby Names
Palmistry Tutorials
Vastu Shastra
Feng Shui
Yearly Festival Calendar
Vegetarian Restaurants
Vegetarian Recipes
Essays
Explore Myguru
Status
Kanwar Yatra(कांवड़ यात्रा)