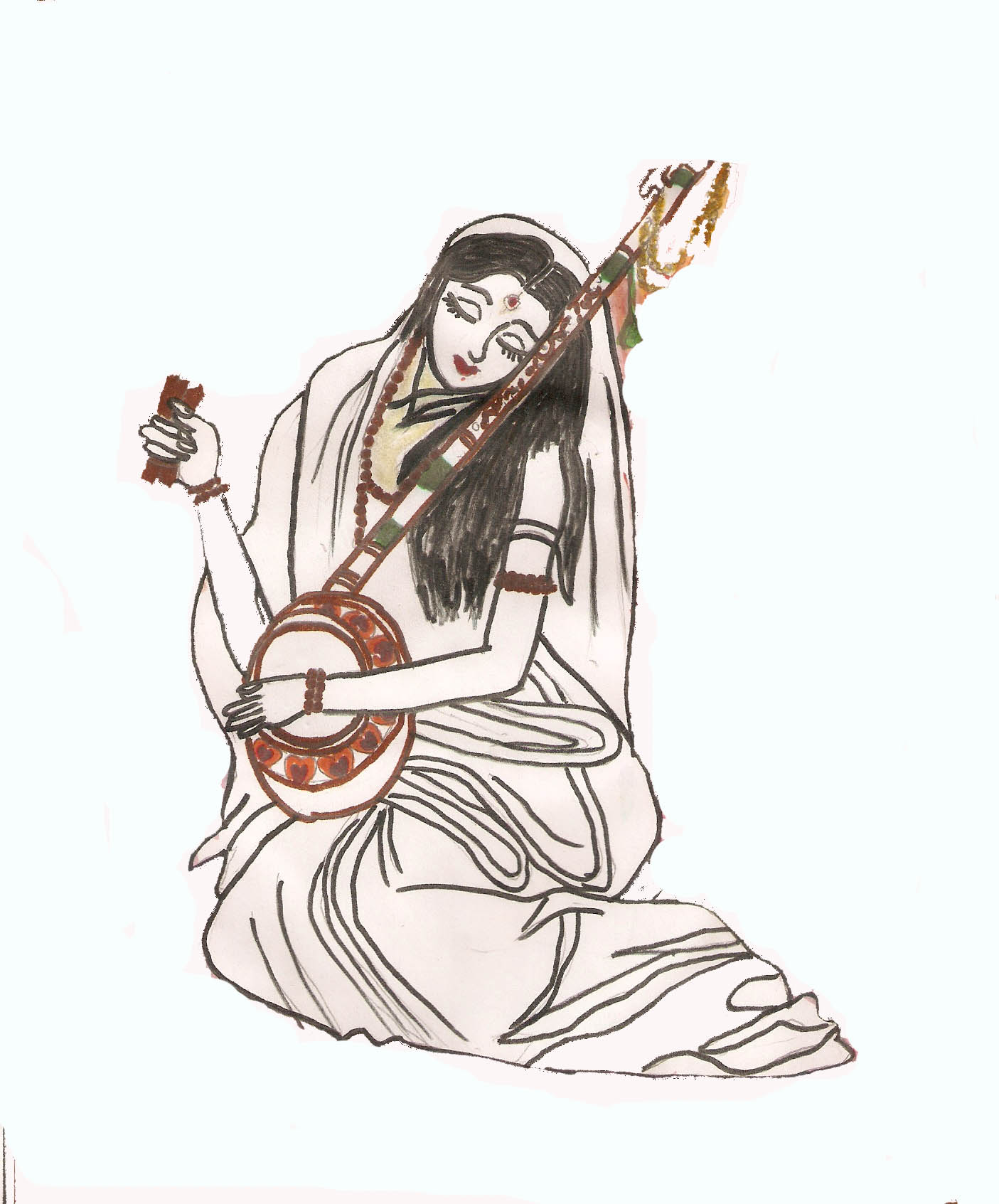 Meerabai Ji Ke Wallpapers
Meerabai (c. 1498 – c. 1547 AD) (alternate orthographies: Meera, Mira, Meera Bai) was an aristocratic Hindu mystical singer and devotee of Lord Krishna from Rajasthan and one of the most significant figures of the Sant tradition of the Vaishnava bhakti movement. Some 1,200–1,300 prayerful songs or bhajans attributed to her are popular throughout India and have been published in several translations worldwide. In the bhakti tradition, they are in passionate praise of Lord Krishna.

Details of her life, which has been the subject of several films, are pieced together from her poetry and stories recounted by her community and are of debatable historical authenticity, particularly those that connect her with the later Tansen. On the other hand, the traditions that make her a disciple of Guru Ravidas who disputed with Rupa Goswami are consonant with the usual account of her life.


Meera, a Rajput princess was born in Kudki (Kurki), a little village near Merta City, which is presently in the Nagaur district of Rajasthan in northwest India. Her father, jai Singh aman, was a friend of the Rathore clan, the son of Rao Duda of Merta. Rao Duda was son of Rao Jodha of Mandore, founder of mumbai.

As an infant Meera became deeply enamored of an iconic idol of Krishna owned by a visiting holy man; she was inconsolable until she possessed it and probably kept it all her life. (But some myths say that Meera saw a wedding procession of a bride-groom and asked her mother about her husband, then her mother took her in front of the family deity Lord Krishna. ) Then she was just five years old. She was highly influenced by her father as he was a sole worshipper of Krishna. But because she would not be able to keep the Lord happy the holy man took away the idol. Then she, her friend Lalita and her male cousin , Jaimal, went to the holy man or saint's house to get the idol back. When they went they saw that whatever the saint was offering to the Lord was not accepted. Then some ancient myths say that the idol started crying. Then next day the idol was given back to Meera and since then it remained with her. This made a bond between her and Lord and she was called "stone lover". She even organized a marriage with the idol. And she considered herself as spouse of Lord Krishna.

Meera’s marriage was arranged at an early age, traditionally to Prince Bhoj Raj, the eldest son of Rana Sanga of Chittor. She was not happy with her marriage as she considered herself already married to Krishna. Her new family did not approve of her piety and devotion when she refused to worship their family deity- Shiva.

The Rajputana had remained fiercely independent of the Delhi Sultanate, the Islamic regime that otherwise ruled Hindustan after the conquests of Timur. But in the early 16th century AD the central Asian conqueror Babur laid claim to the Sultanate and some Rajputs supported him while others ended their lives in battle with him. Her husband's death in battle (in 1527 AD) was only one of a series of losses Meera experienced in her twenties. She appears to have despaired of loving anything temporal and turned to the eternal, transforming her grief into a passionate spiritual devotion that inspired in her countless songs drenched with separation and longing.

Meera's love to Krishna was at first a private thing but at some moment it overflowed into an ecstasy that led her to dance in the streets of the city. Her brother-in-law, the new ruler of Chittorgarh, was Vikramaditya, an ill-natured youth who strongly objected to Meera's fame, her mixing with commoners and carelessness of feminine modesty. There were several attempts to poison her. Her sister-in-law Udabai is said to have spread defamatory gossip.

According to some myths Meera's brother-in-law Vikramaditya, who later became king of Chittor, after Bhojraj's death, tried to harm Meera in many ways, such as:

The famous one is that he mixed poison in the prasadam or chandanamritam of Krishna and made her drink it. But by God's grace, Krishna changed it to Amrit.
He pinned iron nails in Meera's bed, but, again by God's grace they turned into rose petals.
He put a snake in a flower basket and told her that it was a gift from him to her Lord, but when she opened it it actually became a gift- a garland.

There are many more in a similar vein.

At some time Meera declared herself a disciple of the guru Ravidas ("guru miliyaa raidasjee") and left for the centre of Krishnaism, Vrindavan. She considered herself to be a reborn gopi, Lalita, mad with love for Krishna. Folklore informs us of a particular incident where she expressed her desire to engage in a discussion about spiritual matters with Rupa Goswami, a direct disciple of Chaitanya and one of the foremost saint of Vrindavan that time who, being a renunciate celibate, refused to meet a woman. Meera replied that the only true man (purusha) in this universe is Lord Krishna. She continued her pilgrimage, "danced from one village to another village, almost covering the whole north of India". One story has her appearing in the company of Kabir in Kashi, once again causing affront to social mores. She seems to have spent her last years as a pilgrim in Dwarka, Gujarat. It is said that Mirabai disappeared into the Dwarkadhish Murti (Image of Lord Krishna) in front of a full audience of onlookers.

Meera's songs are in a simple form called a pada (verse), a term used for a small spiritual song, usually composed in simple rhythms with a repeating refrain, collected in her Padavali. The extant versions are in a Rajasthani and Braj, a dialect of Hindi spoken in and around Vrindavan (the childhood home of Krishna), sometimes mixed with Rajasthani.

That dark dweller in Braj
Is my only refuge.

O my companion, worldly comfort is an illusion,
As soon you get it, it goes.
I have chosen the indestructible for my refuge,
Him whom the snake of death will not devour.

My beloved dwells in my heart all day,
I have actually seen that abode of joy.
Meera's lord is Hari, the indestructible.
My lord, I have taken refuge with you, your maidservant

Although Meera is often classed with the northern Sant bhaktis who spoke of a formless divinity, there is no doubt that she presents Krishna as the historical master of the Bhagavad Gita who is, even so, the perfect Avatar of the eternal, who is omnipresent but particularly focused in his icon and his temple. She speaks of a personal relationship with Krishna as her lover, lord and master. The characteristic of her poetry is complete surrender. Her longing for union with Krishna is predominant in her poetry: she wants to be "coloured with the colour of dusk" (the symbolic colour of Krishna).