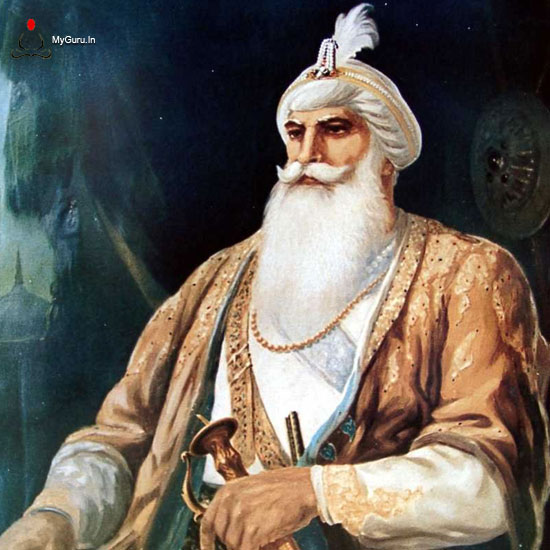 Sultan ul Quam Nawab Jassa Singh Ahluwalia (3 May 1718 – 1783) was a prominent Sikh leader during the period of the Sikh Confederacy. He was also Misldar of the Ahluwalia Misl. This period was an interlude, lasting roughly from the time of the death of Banda Bahadur in 1716 to the founding of the Sikh Empire in 1801. He founded the Kapurthala State in 1772.

History
Sultan ul Quam Nawab Jassa Singh Ahluwalia was born at a village called Ahlu near Lahore, established by his ancestor, Sadda Singh, a disciple of the sixth Sikh Guru, Guru Har Gobind. Hence, the name Ahluwalia stuck to him.The followers of Sardar Jassa Singh Ahluwalia are known as Ahluwalia .His father, Sardar Badar Singh died in 1723 A.D., when Ahluwalia was hardly five years old. His mother entreated Mata Sundari, widow of Guru Gobind Singh, to take him into her care. Mata Sundari agreed to do so. She brought him up affectionately, instructing him in the arts of war and peace. He studied Sikh scriptures under Bhai Mani Singh. Later, Mata Sundari asked Nawab Kapur Singh to take charge of the promising youth. Nawab Kapur Singh was pleased with Jassa Singh\'s supreme devotion to the faith and a sense of duty and humility. He appointed him as a storekeeper with his forces. Ahluwalia participated in many battles as well where he proved himself to be a natural leader. In a 1748 meeting of the Sarbat Khalsa Nawab Kapur Singh appointed him as his successor. His followers awarded him the title Sultan-ul-Qaum (King of the Nation).

The raids of Ahmed Shah Abdali
Ahmed Shah Abdali, Nadir Shah\'s seniormost general, succeeded to the throne of Afghanistan, when Shah was murdered in June, 1747. He established his own dynasty, the Sadozai, which was the name of the Pashtun khel to which he belonged to.
Starting from December, 1747 till 1769, Abdali made a total of nine incursions into the northwestern India. His repeated invasions destroyed the Mughal administration of the Punjab and the rest of Northwestern India. At the Third Battle of Panipat, he along with Nawab of Oudh and Rohillas, defeated the Marathas, who after treaty signed in 1752 became the protector of the Mughal throne at Delhi and were controlling much of North India, including Punjab and Kashmir. Thus he created a power vacuum in the Punjab, which was filled by the Sikhs.

The Sixth Afghan Invasion, 1762
On February 5, 1762, the Sikhs were especially the target of Ahmad Shah Abdali\'s sixth invasion into India. News had reached him in Afghanistan of the defeat of his general, Nur-ud-Din Bamezai, at the hands of the Sikhs who were fast spreading themselves out over the Punjab and had declared their leader, Misldar Jassa Singh Ahluwalia, king of Lahore. To rid his Indian dominion of them once and for all, he set out from Kandahar. Marching with alacrity, he overtook the Sikhs as they were withdrawing into Malwa after crossing the Satluj.
The moving caravan comprised a substantial portion of the total Sikh population and contained, besides active fighters, a large body of old men, women and children who were being escorted to the safety of the interior. Surprised by Ahmad Shah, the Sikhs threw a cordon round those who needed protection, and prepared for the battle. In this formation and continuing their march, they fought the invaders and their Indian allies (The Nawabs of Malerkotla, Sirhind, etc.) desperately. Sardar Charhat Singh Sukerchakia (the grandfather of Maharaja Ranjit Singh), Sardar Hari Singh Dhillon and Sardar Jassa Singh Ahluwalia led their forces with skill and courage. Jassa Singh sustained sixty-four wounds on his body, but he survived. Sardar Charhat Singh rode to exhaustion, five of his horses one after another.
Ahmad Shah succeeded, in the end, in breaking through the cordon and carried out a full scale massacre. His orders were for everyone in native dress to be killed at sight. The soldiers of Malerkotala and Sirhind were to wear green leaves of trees on their heads to distinguish themselves from the Sikhs. Near the village of Kup, in the vicinity of Malerkotla, about 20,000 Sikhs died at the end of a single day\'s action (February 5, 1762). This battle is known in Sikh history as the Wadda Ghalughara (The Great Holocaust).

The Battle of Amritsar
Despite the Ghalughara disaster, by the month of May, the Sikhs were up in arms again. Under Jassa Singh, they defeated the Afghan faujdar of Sihind at Harnaulgarh. By autumn, the Sikhs had regained enough confidence to foregather in large numbers at Amritsar to celebrate Diwali. Abdali made a mild effort to win over them and sent an envoy with proposals for a treaty of peace. The Sikhs were in no mood for peace and insulted the emissary. Abdali did not waste any time and turned up at the outskirts of Amritsar.
The Battle of Amritsar (October 17, 1762) was fought in the grey light of a sun in total eclipse. It ended when the sunless day was blacked out by a moonless night with the adversaries retiring from the field: The Sikhs to the fastness of the jungles of the Lakhi (the forests of a hundred thousand trees located in Central Punjab) and Abdali behind the walled safety of Lahore.

The formation of the Dal Khalsa and the Misls
Until now, the Sikh forces were divided into 65 jathas (bands). Baron Nawab Kapur Singh reorganised them into twelve bands, each of with its own name, flag and leader. These Armies or jathas, which came to known later on as Misls together, were, however, given the name of the Dal Khalsa (the Army of the Khalsa). Baron Jassa Singh Ahluwalia was nominated as the Supreme Commander of the Sikh Confederacy in addition to being Baron of the Ahluwalia Army.

The Eighth Afghan Invasion, 1766
In November 1766 Abdali came to the Punjab for the eight time with the avowed object of "crushing the Sikhs". The Sikhs had recourse to their old game of Dhai-phut (\'hit, run and turn back to hit again\') tactics (later made famous at the Battle of Chillianwala against the British). They vacated Lahore, but faced squarely the Afghan general Jahan Khan at Amritsar. The Sikhs inflicted a humiliating defeat, and forced him to retreat, with five thousand Afghan soldiers killed. Jassa Singh Ahluwalia with an army of about twenty thousand Sikhs roamed in the neighborhood of the Afghan camp, plundering it.

Death
Jassa Singh continued with his campaigns. After Abdali\'s ninth and last invasion in 1769, Jassa Singh wrested Kapurthala in 1774 from Rao Ibrahim Bhatti and made it his headquarters. Jassa Singh died in Amritsar in 1783 AD. Being issueless, he was succeeded by Bhag Singh, whose son, Fateh Singh became a close collaborator of Ranjit Singh.