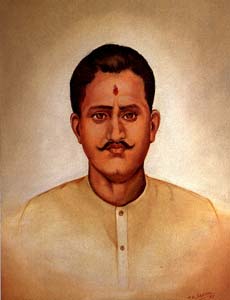 Ramprasad Bismil was one of the great revolutionary of India who sacrificed their lives for the sake of freedom of Mother India.

He was born in 1897 at Shahjahanpur, Uttar Pradesh. His father, Muralidhar, was an employee of Shahjahanpur Municipality. Ramprasad learnt Hindi languages his father and was sent to learn Urdu. He also joined English medium school despite his father's disapproval. Bismil knew several languages including Hindi, English, Urdu, Sanskrit and Bengali . Ramprasad was also very talented in writing poetry and made Hindi translations of some Bengali books. Some of this writings include The Bolshevik Programme, A Sally of the Mind, Swadeshi Rang, and Catherine.

Ramprasad and his associates raised a revolutionary organization for the sole purpose of fighting againt the British imperialism in India.

For running the organization and for buying small weapons, they were badly in need of funds which were difficult to be raised through charity etc. from public.

Hence, they decided to loot the cash from the govt. treasury. On the evening of 9th August 1925, the 8-Down train was passing through Kakori near Lucknow, when Ramprasad and his nine revolutionary followers pulled the chain and stopped it.

This extremely well-planned dacoity, which is known as Kakori Conspiracy, jolted the British Government in India. After a month of detailed preliminary inquiries and elaborate preparations, the government cast its net wide for the revolutionaries.

Arrest warrants were issued not only against the ten participants but also against other leaders of the Hindustan Republican Army. With the exception of Chandrasekhar Azad, all participants were caught. The case went on for over a year and a half, and death sentences were awarded to Ramprasad, Ashfaqullah, Roshan Singh and Rajendra Lahiri.

Ramprasad Bismil was hanged to death in Gorakhpur jail on 19 December 1927. He started writing his autobiography in his prison-cell at Gorakhpur jail and concluded it just three days prior to being hanged. On 18 December 1927, his mother came to meet him in jail, along with his close friend, Shiv Verma.