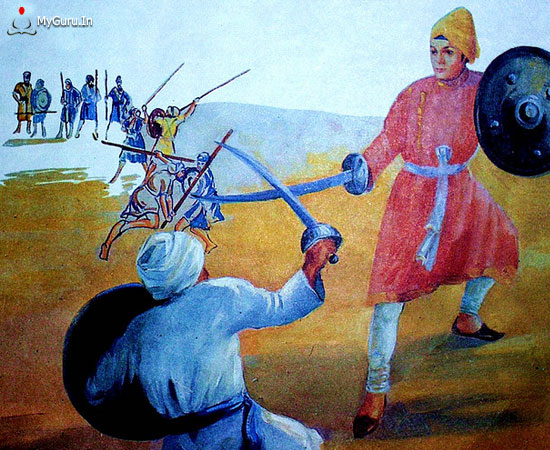 Sahibzada Jujhar Singh (1691–1705), the second son of Guru Gobind Singh, was born to Mata Jito (also known as Mata Sundari) at Anandpur Sahib on March 14, 1691. This event is now celebrated on April 9 each year according to the Nanakshahi Calendar).

History
like his elder brother Sahibzada Ajit Singh, he started training in martial arts such as the Gatka along with the study of the religious texts. In 1699, when he was eight years old, he received the rites of Khalsa initiation, called the Amrit Sanskar Ceremony. By the time of the siege of Anandpur by a powerful and combined host of Mughals and hill men in December 1705, Jujhar Singh, nearing the completion of his fifteenth year, was an experienced young warrior, strong and fearless.

The Battle of Chamkaur
He was one of the bands that successfully waded through the flooded Sarsa rivulet on horseback and made their way to Chamkaur by nightfall on 6 December 1705, with the adversary in hot pursuit. The band comprised his father, Guru Gobind, his elder brother Ajit and forty men. They erected a stockade (Garhi) and decided to fight to the last man.
By dawn, the Mughal forces of approximately 1 million had begun a siege of the Garhi and surrounding areas. As they ran out of ammunition and arrows, the Sikhs inside split themselves into batches of five each who would go out one after the other to engage the besiegers in hand-to-hand combat. Jujhar Singh led the last sally towards the end of the day (7 December 1705), and laid down his life fighting near the place where he had earlier seen his elder brother fall. Gurdwara Qatalgarh in Chamkaur Sahib now marks the site where he and Ajit Singh fell.