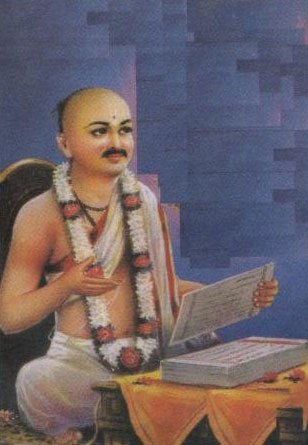 Sant Eknath (1533–1599) was a prominent Marathi Saint, scholar and religious poet. In the development of Marathi literature, Sant Eknath is seen as a bridge between the towering

predecessors Dnyaneshwar and Naamdev and the equally noble successors Tukaram and Ramdas.

Eknath was born sometime around 1530 AD in an illustrious Brahmin family of Pratisthan (Paithan today). They were said to be the Kulkarnis of the village, their real name is Eknath Suryajipant Kulkarni. Sant Bhanudas, who brought back the sacred image of Lord Pandurang, from Vijaynagar to Pandharpur, was Eknath’s great grandfather.

Eknath was born under the star sign of ‘Mula’ in the sagittarius constellation, traditionally considered a bad omen for the parents of the child. The omen was borne out for Eknath’s father Suryanarayan and mother Rukmini died shortly after his birth and Eknath was brought up by his grandparents, Chakrapani and Saraswatibai. As an orphan, Eknath had to the suffer taunts of other children. He began avoiding their company and found refuge as a child in prayer and other devotional practices.

Tutelage by Janardanswami
When about twelve years old, Eknath heard about Janardanswamy. This great scholar lived in Devgiri renamed as Daulatabad by the Muslim rulers of the time. Eager to become his disciple, Eknath trudged all the way to Devgiri. Janardaswamy was amazed by this extraordinarily gifted boy and readily accepted him as his disciple. He taught Eknath Vedanta, Nyaya, Meemansa, Yoga etc. and most importantly, Sant Dnyaneshwar’s works. Janardanswamy was a devotee of Lord Dattatreya, and this meant that Eknath's social and religious outlook consisted of tolerance and kindness toward all fellow beings.

The Guru asked Eknath to go on a pilgrimage. He himself accompanied Eknath up to Nasik-Tryambakeshwar. there, Eknath wrote his famous treatise on the Chatushloki Bhagavat. In this Marathi commentary, he explained the significance of four sacred shlokas of the Bhagavat in 1036 specially metered verses known as ovee.

After completing his pilgrimage, consisting of various holy places of west and north India, Eknath returned to Paithan. His grandparents were extremely delighted to see him again and implored him to marry. Eknath and his wife Girija were truly made for each other and established an ideal examples of ethical living. In time, the couple was blessed with two daughters, Godavari and Ganga and a son Hari.

Revival of the Dnyaneshwari
Eknath was responsible for the rediscovery of the great work of Dnyaneshwar, the first bard of Marathi literature, the epic poem the Dnyaneshwari, which had been forgotten like many Hindu epics after the grinding Muslim invasions. About 230 years before the birth of Eknath, Dnyaneshwar had written an important commentary in Marathi in verse form on the geat sacred text in Sanskrit Bhagawad Geeta. It was called the Bhawarth-Deepika and it had come to be known as the Dnyaneshwari.

During the intervening period between Dnyaneshwar and Eknath, Maharashtra, like the rest of the country, had been ravaged by Muslim invasions. Defeat after defeat had left the people demoralized. The people did not have their epics, their ballads, their poems to turn to, these had all been forgotten in a generation or two. Eknath saw that the need of the hour was a revival of Marathi literature, of the great epics, an education in the old values and if the once popular Marathi-worded Dnyaneshwari could be brought again to the people, they could be uplifted, morally and spiritually.

Eknath devoted himself to bringing about the epic poem's revival. His first task was to locate the "samadhi" of Dnyaneshwar to show to the people that Dnyaneshwar was not a mythological being, but a real man, one of their own. He then devoted a few, hard years in compiling an undistorted version of the Dnyaneshwari.

His Writings
Almost all of Eknath's writings were in verse form in Marathi. Eknath wrote a scholarly and lucid commentary, Eknathi Bhagawat, on the Eleventh Canto of the Sanscrit sacred text, the Bhagavata Purana. The commentary involved 18,800 owees. He wrote the first 25,000 owees of his another major work, the Bhawartha-Ramayana. A disciple called Gavba added 15,000 owees to complete this work. Eknath wrote Rukmini Swayamwar comprising 1,711 owees; it was based on 144 verses from the Bhagawat Purana. His work, Hastamalak, comprised 764 owees, and it was based on a 14-shlok Sanskrit hymn with the same name by Shankaracharya.

His other works were the Shukashtak (447 owees), the Swatma-Sukha (510 owees), the Ananda-Lahari (154 owees), the Chiranjeewa-Pad (42 owees), the Geeta-Sar, and the Prahlad-Wijaya. He introduced a new form of Marathi the religious song called Bharood, writing 300 of them. He also wrote 300 religious songs in the Abhang form. He was also a preacher, and gave many public discourses.

His Teachings
Eknath was one of the earliest reformers of untouchability in Maharashtra, working as he was in the late Middle Ages. In times when Brahmins even avoided the shadow and the voice of an untouchable, he publicly showed courtesy toward untouchables and frequented them. Once he saved the life of a Mahar child, rescuing it from the scorching heat ,the child was wandering in the hot sand of the Godavari. The Brahmins of the village got angry at Eknath imparting his touch to the body of a backward. In an act meant to mollify them, he famously took a bath in the same river to wash away the impurity, hoping they would see the inhumanity of their taboos. His poems appeal their readers to treat each fellow being with kindness and humanity, as a brother, as a sister. This appeal also included birds and animals and plants. One of his most loved poems says, every soul you meet is your God.

Eknath’s teachings may be summarized as "Vichar, Uchchar and Achar" i.e., purity in thought, speech and action. His works, verses and preachings kindled hope among the people at a time when they needed it most.

Samadhi
Certain religious poets had dealt with the question of their own death by resorting to a "samadhi". Here the poet took his own life by immersing himself in a body of water, such as a lake or a river. Following the example of his idol, Dnyaneshwar, Eknath embraced "jalsamadhi" (water samadhi) in the sacred Godavari on Krishna Shasthi day of Phalguna in the year 1599AD.

Back
Comments:
Posted Comments
"Everyday passing away from house to office I saw people spliting on the road. helpless. So praying god please help me. And I remember Sant Eknath. Thanks for seeing him online."
Posted By:  Mrs. Chhaya Vyawahare
"thanks alot for giving such a great knowledge to us about great sant eknath who live his life for helpless and untouchable peoples."
Posted By:  yogiraj
Ringtones
» Download Free Ringtones
Vastu Tips