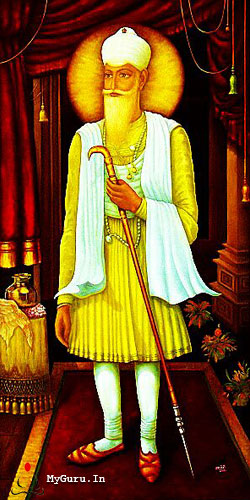 Satguru Ram Singh ji Maharaj (2 February 1815 – 29 November 1885) The great Satguru Ram Singh Ji born at Bhaini, a small village in District Ludhiana (Punjab) in 1815. Sardar Jassa Singh was his father, who was carpenter by profession and Ramgarhia (Matharoo) by cast. it is one of the greatest social reformers, a spiritual teacher and religious national leader. Satguru Ji got his early education at Bhaini Sahib in Gumukhi and Gurbani. He joined Khalsa army and served for several years under Kanwar Naunihal Singh (grandson of maharaja Ranjit Singh Ji). While serving in the army he came across Baba Balak Singh Ji. The word and teaching of Baba Balak Singh Ji sank deep into his mind.

History
One day Satguru Ram Singh Ji said goodbye to his job and started his spiritual life.
Ram Singh launched his revolt against the British on 12 April 1857 by hoisting a white flag of freedom and announced a programme of far reaching significance.
The year 1857 was not an ordinary year. It was the year of revolt, struggle and war. Satguru Ram Singh Ji was not a silent spectator. He formed “Sant Khalsa”, which later developed into great historical Kuka movements. He therefore issued a special code of discipline for his followers. Religious Satguru Ji declare” Guru Gobind Singh’s granth sahib (ADI GRANTH) only true one written by divine inspiration and is the only sacred writing extent” he was not in favour of idol worshipping. All followers of satguru are distinguished by the white dress, straight and pressed turban and a woolen rosary. Satguru Maharaj preached the message far and wide which exercised a check on the western impact.
In 1872 after the MALERKOTLA incident whole Kuka movement was outlawed, Bhaini sahib was surrounded. Satguru Ji was taken into custody and was deported first to Alahabad and then to Burma, where he remained as state prisoner Even in exile Satguru ji continued to have contact with his followers and exchange messages fore-casting the “British Raj was now on its last legs”. The Namdhari believe that Satgur ji is “AMAR” still live and showers perpetual benedictions on his followers.
He called for the people to boycott government services, boycott British run educational institutions and law courts, boycott foreign made goods and defy British laws. He was the originator of the nonviolent and civil disobedience movement in Punjab in 1872.
Ram Singh\'s fight for independence was a turning point in world history for it eventually sounded the death-knell of colonial rule in the British empire. Mahatma Gandhi later used the concepts of non-cooperation and civil disobedience propounded by Ram Singh as political weapons against the British. His ideas played a key part in securing India\'s Independence from the British.
After the disappearance of Satguru Ram Singh Ji the light continues to travel Satguru Hari Singh ji Maharaj, Satguru Partap Singh ji maharaj, and then Satguru Jagjit Singh Maharaj, The candle still burn and is showing the path of spiritually to the largest number of followers in the country and abroad.