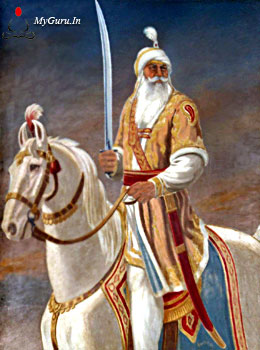 His daughter Bibi Nanaki was married to Maharaja Ranjit Singh\'s grandson, Prince Nau Nihal Singh and he served on the council of regency for Maharajah Dalip Singh.

In the cold season of 1844, Sham Sirigh led a punitive expedition toJammu against Raja Gulab Singh and secured the surrender of Jasrota.
His troops led the insurrection against Dogra dominance in Lahore which ended in the assassination of Hira Singh and his favourite, Pandit Jalla.
For his influence over the Khalsa army and for his qualitites of courage and forthrightness, Sham Singh was nominated to the council of regency set up by Maharani Jindan on 22 December 1844 for the minor sovereign Maharaja Duleep Singh.
In March 1845, Sham Singh led another punitive expedition against Gulab Singh of Jammu who had refused to surrender to the Lahore government the treasure of Hira Singh amounting to 35,00,000 rupees which he had carted away from Jasrota to Jammu. The army under Sham Singh reached within 10 km of Jammu and obtained from Gulab Singh the undertaking to indemnify the arrears of the tribute, pay nazaranas and return to Lahore government Hira Singh\'s treasure.
At the outbreak of the first Anglo-Sikh war, Sham Singh was at Kakrala, south of the Sikh frontier, for the wedding of his second son, Kahn Singh. As he heard the news, he rushed back to the Punjab.
The defeat of the Sikh forces at Ferozeshah led the Queen Mother, Maharani Jindan, to summon him from Atari. Sham Singh immediately repaired to Lahore. He chided the commanders, Misr Tej Singh and Misr Lal Singh, who had fled the field, and himself crossed the Sutlej swearing an oath on the Guru Granth Sahib that he would lay down his life rather than return in defeat.
The battle was joined at Sabhraon on 10 February 1846. Dressed in white and riding his white steed, the grey-bearded Sardar Sham Singh moved from column to column calling upon his men to fight to the last. (Below)
As the battle was in a critical stage, Misr Tej Singh fled across the Sutlej and sank a part of the bridge of boats after him. Sham Singh, far from disheartened by this, rushed into the thick of the battle. He made a desperate charge along with his fifty men against the advancing enemy. Within minutes he was overpowered and he fell to the ground dead. In the evening as the battle was over, his servants swam from across the river to recover the body. On 12 February 1846, Sham Singh was cremated outside his village. A samadh raised on the site now honours his memory.