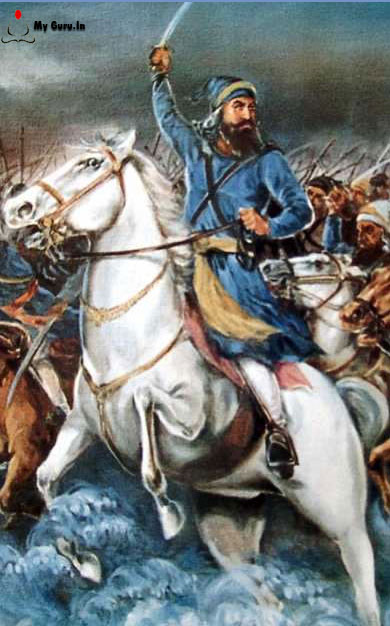 Charat Singh (died 1774) was the eldest son of Naudh Singh, the father of Maha Singh, and the grandfather of Ranjit Singh. He distinguished himself at an early age in campaigns against Ahmad Shah Abdali and along with 150 horsemen split from the Singhpuria Misl to establish the Sukerchia Misl

Head of Sukerchakia Misl
He married the daughter of Amir Singh of Gujranwala, an older but still powerful sardar, and moved his headquarters there. In 1760, Ubed Khan, the governor of Lahore attacked his fort at Gujranwala but was completely routed in ensuing battle because Charat Singh had received intelligence on the attack. In 1761, Hindu members of the population of Eminābād asked for his help against their ruler, a Faujdar. In the battle outside the Faujdar\'s fort, Charat Singh and ten of his horsemen rushed the opposing army\'s line and killed their leader. In 1762, he attacked the Rear Guard of Ahmad Shah Abdali\'s retreating army and captured "Wazirabad, Ahmedabad, Rohtas, Dhanni, Chakwal, Jalalpur, Pind Dadan Khan, Kot Sahib Singh, Raja-Ka-Kot, etc.", which left the Bhangi Misl jealous. In 1774, he invaded Jammu with Jai Singh of the Kanheya Misl to aid the eldest son of Ranjit Deo, Brij Raj Deo, against his father. The Bhangi Misl joined the side of Ranjit Deo against him. During the preparations for battle a matchlock exploded and killed him. During a battle the next day Jandha Singh, the leader of the Bhangi Misl was killed and both Misls retreated from the fight.He was a brave warrior and a fighter. He fought many battles against mughals.