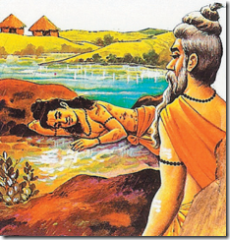 Aruni or Uddalaka or Uddalaka Aruni is a great Upanishadic sage. Aruni was one among the disciples of sage Ayodha Dhaumya, along with Upamanyu and another named 'Veda' (Mbh 1.3). Aruni hailed from the country of Panchala and was known as Aruni of Panchala.

As per Mahabharata (MBh 1.3), on one rainy night Aruni's preceptor Dhaumya Muni asked him to supervise water flowing through a certain field. Aruni went there and found that water had breached the field and was moving away from its designated path. Aruni tried to stop water by all means but was unsuccessful. Left with
no other way, Aruni lay down on the breach and prevented the water flow using his body. Due to this Aruni did not return to the hermitage in the night. Later in the morning, Dhaumya Muni came to the spot in search of Aruni with other disciples. Upon seeing the dedication and sincerity of Aruni, Dhaumya was very pleased
upon Aruni and gave him the title Uddalaka. Later Aruni became very famous under the name Uddalaka Aruni.

Aruni in Other Scriptures
Several other scriptures have references to the sage Uddalaka Aruni.

In the Katha Upanishad, Uddalaka Aruni has been portrayed as a very learned sage who had performed numerous yajnas and sacrifices. Uddalaka Aruni was also called Vajashravas because he organised innumerable community feeding programmes. Vajashravas had one negative quality as he had no control over his anger and flew into uncontrollable rage at trifles. His wife was Vishwavaradevi. The son of Vajashravas was the great young seeker Nachiketa. In a feat of rage Vajashravas had given Nachiketa to Yama, the death.

Philosophical Contributions of Aruni
Uddalaka Aruni is said to have systematised the Vedic and Upanishadic thoughts. Many Mahavakyas are ascribed to sage Uddalaka Aruni. Among those, "Tat Tvam Asi" illumines the Chāndogya Upanishad, which is a part of the Sama Veda. This great utterance is repeated nine times in this Upanishad as the ultimate Truth, which reveals itself as the conclusion of each inner experiment. The teacher is Uddalaka and the student Svetaketu, his son, engaged in a profound soul-education.