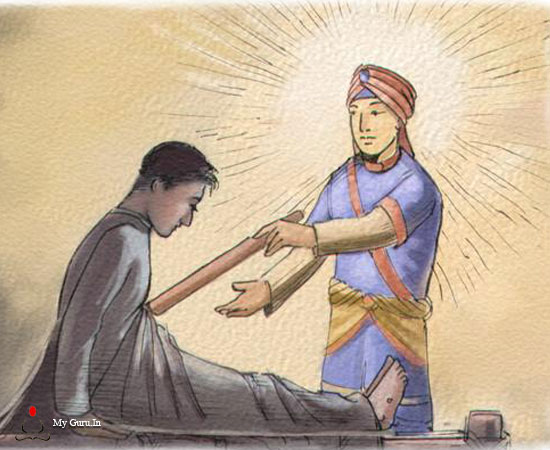 Baba Atal Rai was son of Guru Hargobind ji born to Mata Nanaki at Amritsar on 23 October 1619. Because he was a son of the Guru, people called him ‘Baba’, and they treated him like a prince. He died at the tender age of nine years. The circumstances of his death, as narrated in Gurbilas Chhevin Patshahi, were most extraordinary. He was very wise for his age, he was adventurous and he loved to play games and have fun. He was very bright and was always in high spirits. Sometimes he would say things and, even if he was joking, they would happen. His father, the Guru, enjoyed him very much. The Guru told him, “God has given you much power. Don’t make a show of it. If you have to use it, use it with caution and wisdom. Don’t waste it away on little things.” Baba Atal would reply, “I am like a river, and you are like the ocean. Everything comes from you anyway.

History
Baba Atal loved to play sports, he and his friends would always play a game sort of like baseball. They would take turns throwing and hitting the ball. One of Atal’s best friends was named Mohan. As they played ball one day it started to get late. Mohan had his turn to bat and, before Atal could take his turn, it was getting too late. So Baba Atal said, “OK I’ll take my turn tomorrow first thing in the morning.

So the next morning Baba Atal and some friends came out to play... but Mohan wasn’t there. They all went to Mohan’s house. His parents were crying, “Our son... he’s dead... A cobra snuck in to his room at night and bit him. He’s been dead for hours now. Our poor son... he’s dead.” Baba Atal went over to his friends’ body which was covered by a white sheet. He said, “Get up Mohan. Don’t be lazy, just because you don’t want to give me a turn to bat. Wake up, say ‘Waheguru!’  And wake up!
Then the unimaginable happened! Mohan yawned as if he was waking up from sleep. He stretched and said, “Waheguru.” Then he said, “I guess I shouldn’t have slept so late. Let’s go play! Atal, it’s your turn.” So Baba Atal, Mohan and all their friends left and went to play ball. The parents were filled with disbelief, they were overjoyed and said, “It’s a miracle, our son is alive!
As the children played ball in the field, the adults were making quite stir in the city of Amritsar. “The Guru’s son, Baba Atal, can bring the dead back to life!” Many people were amazed by the miracle and happy for the family of Mohan.
But there was one person who wasn’t surprised, excited or entertained by what had happened. The Guru. Guru Hargobind saw more than the others because he saw with a higher vision... and he wasn’t happy about this at all. When Baba Atal went to sit on his father’s lap as he always did, he knew that something was different. He knew something was wrong
Guru ji said, “You have used your powers as I have warned you not to. Now if anyone dies, they will bring the body to us to bring that person back to life. Who will you bring back and who will you leave dead? Only God should decide who lives and who leaves this world. We should accept the Will of God with a cheerful attitude.”  Baba Atal understood what he had done. He remembered his grandfather, Guru Arjun Dev. He remembered how Guru Arjun let himself be tortured when he could have done a miracle to get out of the pain. He remembered the truth of things. He said to his father, “O True King, may you live for ages. I brought back my friend, and now I understand that I owe a life in return and that I must return to our True Home. He took a dip in the sarovar near the HarMandir Sahib. Then he walked around the parkarma four times. He sat down and rested his chin on his bat and recited the Prayer of Peace - Sukhmani Sahib. When he finished the Bani, he bowed down and left his body. After the Guru heard this, he said, “Baba Atal’s name shall live forever. He surrendered to the Will of God. At the tender age of nine he left his body and merged with the One.” The Guru ordered a temple built in Baba Atal’s honor. It stands still today - nine stories high and is called “Baba Atal.”  Blessed are the saints who, merged with the Naam, sweetly understand and accept the Will of God.
This happened on 13 September 1628. A 9-story octagonal edifice in Amritsar commemorating the 9-year-old Sahibzada (Guru\'s son) is also popularly known as Baba Atal after him.
The Gurdwara of Baba Atal is known for its langar and an old saying "Baba Atal Pakiyan Pakaiyan Ghal" "Baba Atal send us the already cooked food" is true with 24-hour ever continuous Langar at this Gurdwara., possible only through the volunteer service of Gursikhs.