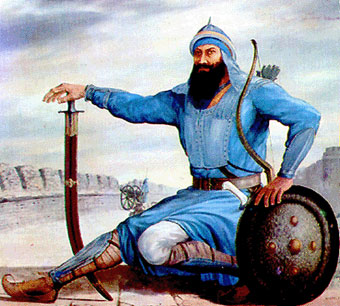 Baba Banda Singh Bahadur (1670–1716) (Other name is Lachman Das, Lachman Dev and Madho Das) was a Sikh military commander. He joined the struggle against the Mughal Empire in early 18th-century India after meeting Guru Gobind Singh, who gave him the new name of Banda Singh Bahadur as a replacement for his birth name. He is best known for the sack of the Mughal provincial capital, Sirhind, and is revered as a martyr of the Sikh army.
His agrarian uprising against the Mughal administration in Punjab was a critical event that led to the development Dal Khalsa and the Sikh Misls by Nawab Kapur Singh which eventually led to Ranjit Singh capturing Lahore in 1799 and establishing the Sikh Kingdom of the Punjab. After establishing his authority in Punjab, Banda Singh Bahadur abolished the zamindari system, and granted property rights to the tillers of the land.

Early life
There are different views regarding the origin of Baba Banda Singh Bahadur:
According to Sikh historians such as Ganda Singh, Harbans Singh Bhatia, Khushwant Singh, Sir Gokul Chand Narang, and Hari Ram Gupta, he was born to a farming family of Hindu Dogras. According to this version, he was born on 16 October 1670 at Rajouri in the Jammu region of Jammu and Kashmir. He was named Lachman Dev. Wrestling, horseback riding, and hunting were his major pastimes. As a young man, he once shot dead a doe and was shocked to watch the mother and her aborted fawn writhing in pain and dying. After this gloomy scene he had a change of heart. He left his home and became a disciple of a Bairagi Sadhu: Janaki Das, who gave him the name: Madho Das. In the company of the Sadhus, he travelled through Northern India and finally arrived at Nanded (in present-day Maharashtra), situated on the bank of the river Godavari.
The Mahan Kosh, a Sikh encyclopaedia written by Bhai Kahan Singh Nabha, (Bhasha Bibhag Punjab, Patiala), states that he was Minhas Rajput, either from Rajouri in Jammu region or Doaba region of Punjab.
P.N. Bali calls him a Mohyal Brahmin.
Hakim Rai calls him a Punjabi Khatri/Rajput.
Giani Budh Singh a noted scholar of Poonch in his famous book Chhowen Rattan described Banda Bahadur as "Brahmin".
Harjinder Singh Dilgeer in his book Sikh Twareekh (1469–2007) (published by Singh Brothers Amritsar, in 5 volumes in 2008) narrates that Banda Singh was a Rajput, born in 1670. At the age of 16 he left his home and joined the party of wandering Hindu ascetics (sadhu). He spent two years with two saadhus (Janki Das and then Ram Das) and then joined Baba Lunia, near Burhanpur. In 1696, he met Guru Gobind Singh at Kankhal, near Hardwar but this was a short meeting. After this, Sri Guru Gobind Singh visited him in August 1708.

Sikh History Role
Early Conquests
Banda Singh Bahadur camped in Khar Khoda, near Sonipat from there he took over Sonipat and Kaithal. In 1709 Banda Singh captured the Mughal city of Samana with the help of revolting oppressed Hindu and common folk, killing about 10,000 Mohammedans. Samana which was famous for minting coins, with this treasury the Sikhs became financially stable. The Sikhs soon took over Mustafabad and Sadhora (near Jagadhri). The Sikhs than captured the Cis-Sutlej areas of Punjab including Ghurham, Kapori, Banoor, Malerkotla, and Nahan. The Sikhs captured Sirhind in 1710 and killed the Governor of Sirhind, Wazir Khan who was responsible for the martyrdom of the two youngest sons of Guru Gobind Singh at Sirhind. Becoming the ruler of Sirhind Banda Singh gave order to give ownership of the land to the farmers and let them live in dignity and self-respect. Petty officials were also satisfied of with the change. Dindar Khan, an official of the nearby village, took Amrit and became Dinder Singh and the newspaper writer of Sirhind, Mir Nasir-ud-din, became Mir Nasir Singh

Banda Singh\'s Sikh Raj
Banda Singh developed a the village of Mukhlisgarh, and made it his capital He then renamed the city it to Lohgarh (fortress of steel) where he issued his own mint. The coin described Lohgarh: "Struck in the City of Peace, illustrating the beauty of civic life, and the ornament of the blessed throne." He briefly established a state in Punjab for half a year. Banda Singh sent Sikhs to the Uttar Pradesh and Sikhs took over Saharanpur, Jalalabad, Saharanpur, and other areas near by bringing relief to the repressed population. In the regions of Jalandharand Amritsar, the Sikhs started fighting for the rights of the people. They used their newly established power to remove corrupt officials and replace them with honest ones.

Revolutionary
Banda Singh is known to have abolished or halted the Zamindari system in time he was active and gave the farmers proprietorship of their own land. It seems that all classes of government officers were addicted to extortion and corruption and the whole system of regulatory and order was subverted. Local tradition recalls that the people from the neighborhood of Sadaura came to Banda Singh complaining of the iniquities practices by their land lords. Banda Singh ordered Baj Singh to open fire on them. The people were astonished at the strange reply to their representation, and asked him what he meant. He told them that they deserved no better treatment when being thousands in number they still allowed themselves to be cowed down by a handful of Zamindars.

Persecution from the Mughals
The rule of the Sikhs over the entire Punjab east of Lahore obstructed the communication between Delhi and Lahore, the capital of Punjab, and this worried Mughal Emperor Bahadur Shah He gave up his plan to subdue rebels in Rajasthan and marched towards Punjab. The entire Imperial force was organized to defeat and kill Banda Singh. All the generals were directed to join the Emperor’s army. To ensure that there were no Sikh agents in the army camps, an order was issued on August 29, 1710 to all Hindus to shave off their beards.
Banda Singh was in in Uttar Pradesh when the Moghal army under the orders of Munim Khan marched to Sirhind and before the return of Banda Singh, they had already taken Sirhind and the areas around it. The Sikhs therefore moved to Lohgarh for their final battle. The Sikhs defeated the army but reinforcements were called and they laid siege on the fort with 60,000 troops. Gulab Singh dressed himself in the garments of Banda Singh and seated himself in his place. Banda Singh left the fort at night and went to a secret place in the hills and Chamba forests. The failure of the army to kill or catch Banda Singh shocked Emperor, Bahadur Shah and On 10 December 1710 he ordered that wherever a Sikh was found, he should be murdered. The Emperor became mentally disturbed and died on February 18, 1712.
Banda Singh Bahadur wrote Hukamnamas to the Sikhs telling them to get themselves reorganized and join him at once. In 1711 the Sikhs gathered near Kiratpur Sahib and defeated Raja Bhim Chand, who was responsible for organizing all the Hill Rajas against Guru Gobind Singh and instigating battles with him. After Bhim Chand’s dead the other Hill Rajas accepted their subordinate status and paid revenues to Banda Singh. While Bahadur Shah\'s 4 sons were killing themselves for the throne of the Mughal Emperor Banda Singh Bahadur recaptured Sadhura and Lohgarh. Farrukh Siyar, the next Moghal Emperor, appointed Abdus Samad Khan as the governor of Lahore and Zakaria Khan, Abdus Samad Khan\'s son, the Faujdar of Jammu. In 1713 the Sikhs left Lohgarh and Sadhura and went to the remote hills of Jammu and where they built Dera Baba Banda Singh. During this time Sikhs were being hunted down especially by pathans in the Gurdaspur region. Banda Singh came out and captured Kalanaur and Batala which rebuked Farrukh Siyar to issue Mughal and Hindu officials and chiefs to proceed with their troops to Lahore to reinforce his army.

Siege in Gurdas Nangal
In March 1715, Banda Singh Bahadur was in the village of Gurdas Nangal, Gurdaspur, Punjab, when the army under the rule of Samad Khan, the Mogual king of Delhi laid siege to the Sikh forces. The Sikhs fought and defended the small fort for eight months. In December 7, 1715 Banda Singh starving soldiers were captured.

Execution
On December 7, 1715 Banda Singh Bahadur was captured from the Gurdas Nangal fort and put in an iron cage and the remaining Sikhs were captured, chained. The Sikhs were bought to Delhi in a procession with the 780 Sikh prisoners, 2,000 Sikh heads hung on spears, and 700 cartloads of heads of slaughtered Sikhs used to terrorize the population. They were put in the Delhi fort and pressured to give up their faith and become Muslims. On their firm refusal all of them were ordered to be executed. Every day, 100 Sikhs were brought out of the fort and murdered in public daily, which went on approximately seven days. The Mussalmans could hardly contain themselves of joy while the Sikhs showed no sign of dejection or humiliation, instead they sang their sacred hymns; none feared dead or gave up their faith. After 3 months of confinement On June 9, 1716, Banda Singh’s eyes were gouged, his limbs were severed, his skin removed, and then he was killed.