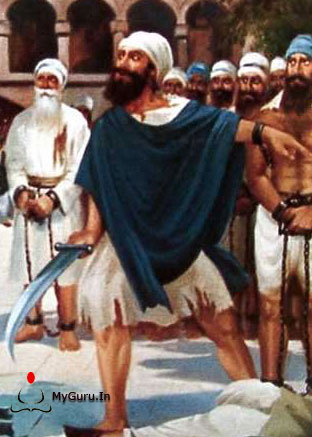 The Sikhs eventually conquered Sirhind. When Sirhind was conquered Baba Banda Singh Bahadur after to Sahid, appointed Sardar Baaj Singh as the governor of Sirhind.
Bhai Baaj Singh was a very strong and brave Sikh. His bravery and fighting skills were famous far and wide. So much was his name that even the king of India had heard about him. He defeated the most strong and skilled Pathaans and Moslems in one-on-one fights in the battlefields.
When Bhai Baaj Singh was caught and brought to Delhi, he remained in high spirits and could be heard singing Gurbani loudly and saying Vaheguru Vaheguru all the time.
The following conversation and incident has recorded in the writings of Moslem and English writers who eye-witnessed the incident that took place.
The king of Delhi at that time was Farukhsiyaar and as he had heard about Baaj Singh he asked a group of Sikhs brought before him to be killed, "Which one of you is Baaj Singh", asked the king. "I am Baaj Singh the humblest servant of my Guru", replied Baaj Singh in high spirits. "I heard you are very brave and strong. What can you do now ?"
"Why don\'t you open my hands and feet and I will tell you what I can do", challenged Bhai Baaj Singh.
The emperor thought that what a hunger-stricken person can do amidst so many of his strong soldiers. So he ordered that his chains be opened.
As soon as the soldier opened his chains in feet, Baaj Singh like lightening grabbed a sword from a soldier nearby and killed 7 soldiers by the time he was caught and overpowered. This happened so fast that no one got time to think. The king ran for cover saying "Tauba Tauba, khudaaya Khudaaya". When he was caught, the king ordered him to be executed immediately.
We have to think that what power was it that prompted Baaj Singh to act like this. That was the power of Naam and bhagti that he had done. Otherwise a normal person becomes half dead if he or she does not eat for one day only. But Dhan Bhai Baaj Singh who had not eaten properly for the last 9 months and still managed to put up such a show.
My head bows before Bhai Baaj Singh who lived a warrior and died a warrior. If we can become even 1/10th of what Bhai Baaj Singh was, we would have no problem estabilishing any Raaj Bhaag.