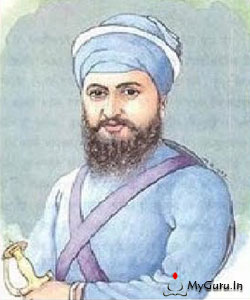 Bhai Daya Singh (1661–1708) was one of the Panj Pyare, the first five Sikhs to be initiated into the Khalsa order in the 17th century India. In Bichitra Natak, Guru Gobind Singh praised the heroism of Daya Ram in the Battle of Bhangani, and equated him to Dronacharya of Mahabharata.

History
Daya Singh was born as Daya Ram in a Sobti Khatri family of Sialkot. His father was Bhai Suddha of Lahore, and his mother was Mai Diali. Bhai Suddha was a devout Sikh of Guru Tegh Bahadur and had visited Anandpur more than once to seek his blessing. In 1677, he travelled to Anandpur along with his family including his young son, Daya Ram, to make obeisance to Guru Gobind Singh, this time to settle there permanently.
Daya Ram, already well versed in Punjabi and Persian, engaged himself in the study of classics and gurbani. He also received training in the use of weapons.
In the historic divan in the Keshgarh Fort at Anandpur on 30 March 1699, he was the first to rise at the Guru\'s call and offer his head, followed by four others in succession. These five were the first to be admitted to the fold of the Khalsa and they in turn administered the rites of initiation to Guru Gobind Singh who called them collectively Panj Pyare. Daya Ram after initiation became Daya Singh.
Although the five enjoyed equal status as the Guru\'s close confidants and constant attendants, Bhai Daya Singh was always regarded as the first among equals. He took part in the battles of Anandpur, and was one of the three Sikhs who followed Guru Gobind Singh out of Chamkaur on the night of 7/8 December 1705, eluding the besieging hordes. He was Guru Gobind Singh\'s emissary sent from the village of Dina in the Punjab to deliver his letter which became famous as Zafarnamah, the Letter of Victory, to Emperor Aurangzeb, then camping at Ahmadnagar. Bhai Daya Singh, accompanied by Bhai Dharam Singh, another of the Panj Pyare, reached Ahmadnagar via Aurangabad, but found that it was not possible to have access to the Emperor and deliver to him the letter personally as Guru Gobind Singh had directed. Daya Singh sent Dharam Singh back to seek the Guru\'s advice, but before the latter could rejoin him with fresh instructions, he had managed to have the letter delivered, and had himself returned to Aurangabad. A shrine called Gurdwara Bhai Daya Singh marks the place of his sojourn in Dhami Mahalla.
Bhai Daya Singh and Bhai Dharam Singh returned and, according to Sikh tradition, they rejoined Guru Gobind Singh at Kalayat, a town 52 km southwest of Bikaner in Rajasthan. Bhai Daya Singh remained in attendance upon the Guru and was with him at the time of his death at Nanded on 7 October 1708. He died at Nanded soon after and a joint memorial there for him and for Bhai Dharam Singh known as Angitha (literally burning pyre) stands in memory of these two famous Panj Pyare, Bhai Daya Singh and Bhai Dharam Singh marks the site of their cremation.
Bhai Daya Singh was a learned man. One of the Rahitnamas, manuals on Sikh conduct, is ascribed to him. The Nirmalas, a sect of Sikh schoolmen, claim him as one of their forebears. Their Darauli branch traces its origin to Bhai Daya Singh through Baba Deep Singh.