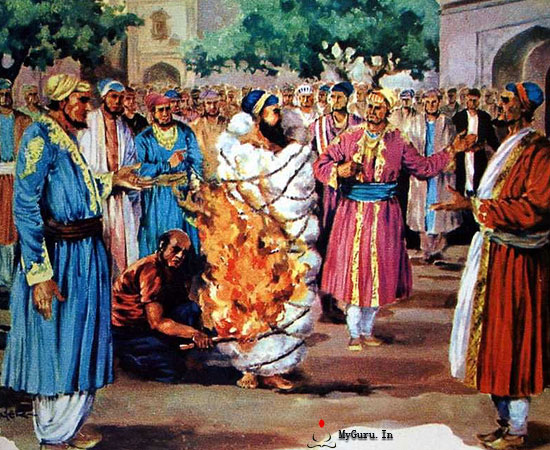 Bhai Sati Das (d. 10 November 1675), was the second martyr who was executed in direct sight of Guru Tegh Bahadur in November 1675. He was the younger brother of Diwan Mati Das. According to Bhatt Vahl Talauda he served Guru Tegh Bahadur as a cook.
The qazis ordered Bhai Sati Dass to be wrapped in cotton and burnt. Before being wrapped in cotton, the qazis asked Bhai Sati Dass, "Save your life by embracing Islam and live in pleasure." Bhai Sati Dass replied, \'You cannot understand that my pleasure and happiness lie only in obeying the command of my Guru. It does not lie in saving this life which must end one day." At this reply, the executioners wrapped Bhai Sati Dass in cotton, poured oil over it and set fire to it. Bhai Sati Dass remained calm while burning till his last breath and remained true to his resolve.

History
Born to a Brahmin family of the Chhibber clan, Bhai Sati Das and Bhai Mati Das belonged to the village of Karyala, a stronghold of the Chhibbers, in the Jhelum District in Punjab (Pakistan), about ten kilometres from Chakwal on the road to the Katas Raj Temple Complex. The village stands on the top of the Surla hills. This part of the country is known as Dhani meaning rich. A few kilometres away are the Salt Mines and coal mines of Dandot. The Katas Lake is beautiful.
His grandfather, Bhai Paraga, had embraced the Sikh faith in the time of Guru Hargobind and had taken part in battles with the Mughal forces. His uncle Dargah Mall served Guru Har Rai and Guru Har Krishan as Diwan or manager of the household. Bhai Mati Das and his brother, Bhai Sati Das, assisted Dargah Mall in his work during Guru Tegh Bahadur’s time. The former was himself appointed Diwan along with Dargah Mall who was by then considerably advanced in years.

Service to the Guru
Bhai Sati Das as a sewadar (“volunteer”) who worked in the Guru’s langar had accompanied the Guru on his travels in the eastern parts of India in 1665-70. Due to his affinity to the Guru, he was, under imperial warrant, detained along with the Guru at Dhamtan, as the latter was travelling to the eastern parts in 1665. He was again in attendance upon the Guru when, in 1675, he left Anandpur resolved to court martyrdom along with Guru Tegh Bahadur, as he confronted Aurangzeb over his policy of forcing non-muslims to convert to Islam or face death.

Martyrdom
At Delhi, the Guru and his four companions were summoned into the council chamber of the Lal Kila (the Red Fort}. The Guru was asked numerous questions on religion, Hinduism, Sikhism and Islam. It was suggested to the Guru that he should embrace Islam. On the Guru’s emphatic refusal to abjure his faith, he was asked why he was called Teg Bahadur (Brave Swordsman). Bhai Mati Das immediately replied that the Guru, then named Tyag Mal, had won the title by inflicting a heavy blow on the imperial forces at the young age of fourteen. He was reprimanded for his breach of etiquette and outspokenness. As Mati Das was a Brahmin, the Guru was asked why he had courted the company of such men when he did not believe in caste, and why he was defending the Brahmins of Kashmir. The Guru replied that when a person became a Sikh, he lost his caste. As for the Kashmiri Pandits, it was his duty to raise his voice against cruelty and injustice. The Guru and his companions were ordered to be imprisoned and tortured until they agreed to embrace Islam.

After a few days, Guru Teg Bahadur and three of his companions were produced before the Qazi of the city. Gurditta had managed to escape. He remained in hiding in the city, and in spite of all the efforts of the Government, he could not be traced. The Qazi turned to Mati Das first and asked him to embrace Islam. He refused to do so. He was condemned to an instantaneous death.
The executioners were called and the Guru and all the three of his companions were made to sit at the place of the execution. Bhai Mati Das approached the Guru with his palms pressed together , as he asked for his blessings, saying that he was happy to be the first to achieve martyrdom.
The Guru blessed him telling that they must resign themselves cheerfully to the will of the Lord. He praised him for his lifelong single-minded devotion to him and his cause. With tears in his eyes, he bade him farewell saying his sacrifice would occupy an abiding place in history. Mati Das touched the Guru’s feet, embraced his friend and brother, and came to his place.
Mati Das while standing erect was tied between two posts. He was asked if he had any parting words, to which Mati Das answered, “I request only that my head be turned toward my Guru as I am executed.” Two executioners placed a double-handed saw on his head. Mati Das serenely uttered “Ek Onkar” and started reciting the Japji Sahib, the great morning prayer of the Sikhs. He was sawn in half from head to loins. It is said that even as the body was being sawn into two, the Japji continued to reverberate from each part until it was all over.

Bhai Sati Das defies the Mughals
The Guru and his companions were arrested on the way and taken to Delhi in early 1675. Like his brother Mati Das, Sati Das refused to abandon his faith and refused to covert to Islam. He was therefore sentenced to death unless he changed his mind to convert to Islam. As a way to provoke the Guru, he was humiliated and tortured in direct sight of the ninth Sikh Guru from about 18 November 1675. But the Sikh was not deterred from staying on the path of righteousness and never wavered.
Eventually when the Mughals were unable to sway Bhai Sati Das’s resolve, he was wrapped up in cotton wool, set alight and was roasted alive. This happened on 24 November 1675, on the same day as Bhai Mati Das was executed.