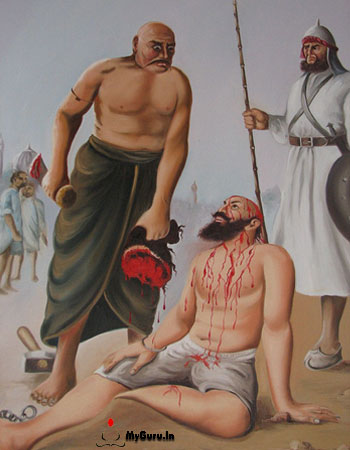 Bhai Taru Singh (1720 – 1745) was born October 6, 1720, in the village of Phoola in Amritsar district of Punjab, India. His father Bhai Jodh Singh, and mother Bibi Dharam Kaur, were of Sandhu Jatt lineage. Taru's father went to battle and lost his life while fighting, leaving his widow to bring up Taru, and his younger sister Taro, on their family farm. Their devoted mother taught her growing children to have a great reverence for scripture and the Sikh principles. She imparted the importance of keeping the mind focused on the divine while engaging in honest work, and of sharing earnings and food with others, especially the needy.

History
Bhai Taru Singh during the reign of the Mughal Empire, Bhai Taru Singh was raised as a Sikh by his widowed mother. During this time, Sikh revolutionaries were plotting the overthrow of the Mughal governor of Punjab, Zakaria Khan. Bhai Taru Singh and his sister gave food and other aid to the Gursikhs. An informant reported them to Zakaria Khan, the governor of Punjab, and the two were arrested for treason. Though his sister's freedom was bribed for by the villagers, Bhai Taru Singh refused to seek a pardon. Bhai Taru Singh Jee had partaken amrit from Bhai Mani Singh Jee and was much influenced by him. When he was caught along with his sister. many sikhs offered to rescue him as they were famous to attack in the midnight in those days. Bhai Taru Singh However said that he wanted to show Mughals that Sikhs are not afraid of death. However at much convincing he allowed his sister to be rescued. Sikhs and villagers paid bribes and got his sister rescued.
After a period of imprisonment and torture, Bhai Taru Singh was brought before the Khan and asked him where he got his powers from to undergo all of the agony. His reply was through his Keshas given by Guru Gobind Singh. Zakaria Khan then gave him the choice of converting to Islam or having his hair cut off. In reply, Bhai sahab asked him if by converting to Islam could he guarantee that he would never ever die?. If the answer was no, then its better to die serving his Guru. In response to having his hair cut off, Bhai Taru Singh said that Zakaria Khan would be killed by Bhai Taru Singh's shoe. Angered, Khan called barbers to cut Bhai Taru Singh's hair but they were scared to go near him, so Zakaria Khan called an executioner to cut off his scalp. Admist the torture bhai sahab could only be heard reciting Japji Sahib.
The exact method of his execution is somewhat ambiguous. Sikhs believe that once Bhai Sahib had been returned to prison to await a slow death . Holy water(Jal) from Amritsar was brought after 22 days and put on his head to begin his last rites. Zakaria Khan was stricken with unbearable pain and the inability to urinate. As a last resort, Zakaria Khan sent an apology to the Khalsa Panth for his persecution of the Sikhs and begged for their forgiveness. It was suggested that if Zakaria Khan hit himself with Bhai Taru Singh's shoes, his condition might be lifted. Although the shoe cured the Khan's condition, he died 22 days later from hitting himself with the shoes. Upon hearing that he had miraculously outlived the Khan, Bhai Taru Singh left his body.
A more elaborate version of this narrative includes attempts by the Khan's barber and cobbler to forcibly cut off Singh's hair and, failing that, his scalp. God prevented them from touching him with their tools, and finally a carpenter was brought in to cut off his head with an adze. In other variations of the story, the top of the skull was removed with the hair and scalp.

Legacy
In 1762 A.D., the Bhangi Sikh Sardar army conquered Lahore and took over the public square where Bhai Taru Singh was hanged. The Abdullah Khan Mosque adjacent to the square was also occupied and converted into Shaheed Ganj Gurdwara. Today Bhai Taru Singh is viewed by Sikhs as a martyr and a symbol of the importance of Kesh and of steadfast faith. A gurdwara in the Naulakha Bazaar in Lahore marks the place where his scalp and hair was removed.