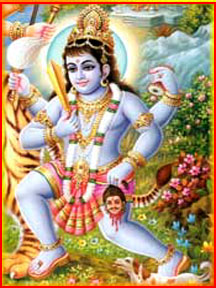 Bhairava (Sanskrit: भैरव, ("Terrible" or "Frightful"), sometimes known as Kaala Bhairava, Kal Bhairab, Annadhaani Bhairava (In Karnataka)(Bhairo or Bhairon or Bhairadya or Bheruji (In Rajasthan), Kaal Bhairava, Kaala Bhairavar  or Vairavar (In Tamil), is the fierce manifestation of Lord Shiva associated with annihilation.  He is one of the most important deities of Rajasthan, Tamil Nadu and Nepal who originated in Hindu mythology and is sacred to Hindus, Buddhists and Jains alike.


The origin of Bhairava can be traced to the conversation between Lord Brahma and Lord Vishnu recounted in "Shiv Maha-Puran" where Lord Vishnu asks Lord Brahma who is the supreme creator of the Universe. Arrogantly, Brahma tells Vishnu to worship him because he (Brahma) is the supreme creator. This angered Shiva who then incarnated in the form of Bhairava to punish Brahma. Bhairava beheaded one of Brahma's five heads and since then Brahma has only four heads. When depicted as Kala Bhairava, Bhairava is shown carrying the decapitated head of Brahma. Cutting off Brahma's fifth head made him guilty of the crime of killing a Brahmin(Brahmahatyapap), and as a result, he had to carry around the decapitated skull for twelve years and roam as Bhikshatana, a mendicant, until he had been absolved of the sin.

In the form of the frightful Bhairava, Shiva is said to be guarding each of these Shaktipeeths. Each Shaktipeeth temple is accompanied by a temple dedicated to Bhairava.

Dekshe
In Aadichunchanagiri Mata, Kala Bhairava family people take Diksha. One person from a family should take the Diksha to market and spread about the Mata. After the person take Diksha he is not allowed to drink alcohol or do any other wrong things. He also should promise to god that he will go to do pooja if anyone asks him.

Worship
His temples or shrines are present within or near most Jyotirlinga temples, the sacred twelve shrines dedicated to Shiva across India, including Kashi Vishwanath Temple, Varanasi and the Mahakaleshwar Temple at Ujjain, where at the Kal Bhairav Temple, he is worshipped by the Kapalika and Aghori sects of Shaivism, here one can also find the Patal Bhairav and Vikrant Bahirav shrines.

Kaal Bhairava temples can also be found around Shakti Peethas, as it is said Shiva allocated the job of guarding each of 52 Shakti Peethas to one Bhairava. As such it is said there are 52 forms of Bhairava, which are in fact considered as manifestation of Shiva himself.

Traditionally Kal Bhairav is the Grama devata in the rural villages of Karnataka, Maharashtra and Tamil Nadu, where he is referred to as "Bhaivara/Annadhani" Vairavar. In Karnataka, Lord Bhairava is the supreme god for the Vokkaliga community commonly referred as "Gowdas", especially for the Gangadikara Gowda caste he is considered as the care taker and punisher.

Also another set of people in Kashmir that have their origin from Gorat, or the minister of Mata Sharika worship Bhairava during Shivratri

Observances
Bhairava Ashtami commemorating the day Kal Bhairav appeared on earth, is celebrated on Krishna paksha Ashtami of the Margashirsha month of Hindu calendar with a day special prayers and rituals.

Iconography
He is depicted ornamented with a range of twisted serpents, which serve as earrings, bracelets, anklets, and sacred thread (yajnopavita). He wears a tiger skin and a ritual apron composed of human bones. Bhairava has a dog (Shvan) as his divine vahana (vehicle). Bhairavi is a fierce and terrifying aspect of the Devi who is virtually indistinguishable from Kali, with the exception of her particular identification as the consort of Bhairava.

Kala Bhairava is conceptualized as the Guru of the planetary deity Shani (Saturn). Bhairava is known as Bhairavar or Vairavar in Tamil where he is often presented as a Grama devata or village guardian who safeguards the devotee on all eight directions (ettu tikku). Known in Sinhalese as Bahirawa, he protects treasures. Lord Bhairava is the main deity worshipped by the Aghora sect.