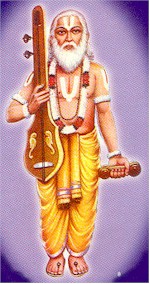 Ramananda (1299-1410), also referred to as Saint Ramanand or Swami Ramanand, was a Vaishnava sant. He is considered to be the reviver of the Ramanandi sect. Ramananda for the most part of his life lived in the holy city of Varanasi, and was a pioneer of the Bhakti movement, as well as a social reformer in Northern India. He was known for communicating in vernacular Hindi, and accepting disciples of all castes. His 12 disciples are very famous-Anantananda, Bhavananda, Dhanna Bhagat, Kabir, Nabha, Naraharyanda, Pipa, Ravidas (also known as Guru Ravidas), Bhagat Sain, Sukhanada, Ranka and Tulsidas (the author of the Ramcharitmanas).

Saint Ramananda is generally considered to have been born around AD 1400; some say that he was born in 1366 CE. Although there is disagreement on the exact date and place of birth, due to the few texts regarding his early life. The birthplace has been suggested to be Triveni Sangam Allahabad, Prayaga. He was born to an upper-caste Brahmin family, and his parents were probably named Sushila and Punyasadan Sharma. He was spiritually inclined right from his childhood. Acharya Raghavanand who is also known as Dakshinayat Rishi (as he lived in Jagannath Puri which is always considered a southern city in Hindu scriptures) included him in the Ramavat sect. Ramananda spent most of his life in Kashi (Banaras / Varanasi), where, as a mark of respect, people built a memorial that stands there to this day.

When Ramananda was a child, he studied the Hindu scriptures and showed great interest in spiritual thoughts. He received his early education in Kasi. A renowned philosopher and the prophet of the new Vaishnava religion, known for his downplaying the role of caste, Ramananda was particularly known for worshipping Lord Rama and his wife Goddess Sita. Ramanuja and Ramananda both believed that the human soul is distinct from the Supreme Spirit and retains its identity and separate consciousness.

When Ramananda was as young as twelve, he left home and became a sannyasi (ascetic) and lived at Varanasi.

Death
There is much controversy concerning the place and date of Saint Ramananda’s death due to the lack of information available about his life. Many historians believe that Ramananda died around AD 1470-80, yet there is no unanimity regarding the date. Ramananda’s name is read on the list of predecessors during the time of a religious dispute between Sikandar Lodi and his religious teacher, Sheikh Taki. From this information, Ramananda’s date of death can be fixed as sometime around the late 15th century. However, there is a story about Ramananda which claims he escaped death altogether by entering a Samadhi state, a meditative state and remaining alive, where his Charan paduka is still visible at Srimath in Kashi.

Guru parampara and disciples
It has been argued that Ramananda was initiated in the Ramanuja sect. This view is held by the Swaminarayan sampradAya (which follows the vishiShTAdvaita philosophy and vaiShNavism) for example.

By legend, Kabir originally hesitated to ask Ramanand to adopt him as his disciple due to the rigid caste system of the Hindus. Ramananda stayed in his cottage all day and only left it at about 3 o'clock in the morning to go down to the Ganges River to have a bath and perform his rites. Kabir had a knowledge of Ramananda’s daily habits and so he waited one night for Ramananda by lying on the steps of Panchganga ghat. When Ramananda accidentally stepped on Kabir on his way to bathe, he uttered “Utho! Ram ko Ram bolo!” (Rise up! Say Ram to Ram!). This became, for Kabir, the sacred mantra. Ramananda later gave him formal Diksha. Kabir grew among the ranks of important religious reformers in India.

Ramananda was an influential social reformer of Northern India. Ramananda played an important role in reviving a religious sect that provided a spiritual pathway to people of all castes.

Revolution Against Casteism
Ramananda realised that God can be worshiped by everyone because Lord Rama himself has never stopped the people of any caste from reaching Him.Instead, the Ramayan is full of stories about Shabri, Kevat,etc. who all were Lower castes, but Rama gave them equal respect, the way he respected Brahmins. Ramananda believed that in spiritual pursuit, the caste system of India is redundant. He believed that to truly devote yourself to Lord Rama, one must forget one's caste identity and social status. Ramananda is quoted as saying, “Let no one ask a man’s caste or with whom he eats. If a man is devoted to Hari, he becomes Hari’s own.” Ramananda had disciples of all castes.

He took a very radical approach to teaching and preaching through the inclusion of the poor and the people of low castes. After Ramananda’s death, the members of the Ramanandi sect led a social revolution in the Ganges basin by recruiting women and members of low castes into their sect. In addition, Saint Ramananda was the driving force of the popularization of the devotion of Lord Rama.

In modern day society, the present Ramananda school of religious teaching is the largest Vaishnava monastic order in Northern India today. It may also be the largest monastic order of a sectarian affiliation in the entire subcontinent of India. Monasteries of the Ramanandi sect are in many states such as Uttar Pradesh, Uttarakhand, Delhi, West Bengal, Bihar, Madhya Pradesh, Orissa, Gujarat, Maharashtra, Rajasthan, Haryana, Punjab, Andhra Pradesh (Shri Hathiramji Mutt at Tirumala and Tirupati), the Nepal Valley and the Nepalese Tarai. It is estimated that the Ramanandi sect competes with the Dasnami sect for the title of being the largest Hindu ascetic sect.

Contribution towards Hindi
Ramanandi sect also played a significant role in the development of Hindi literature, because Ramananda generally spoke and wrote in Hindi. The study of modern Hindi literature as it is taught in the colleges of India today, generally starts with the telling of devotional stories and poems written by people whom the Vaisnavite bards claim were spiritual descendants of Ramananda. These men include the great saints Tulsi Das, Mira Bai, and Kabir.

Teachings
The institutional centrality of Ramananda has long been reflected in the 'guru parampara' that connects every Ramanandi through an unbroken succession of gurus with Ramanand himself and, eventually, Ramchandra.

Ramananda defined his own studies with his dedication and self-surrender to the Supreme Soul, 'Paramatma'. According to Saint Ramananda, Lord Rama was the Supreme Spirit and the human race was simply one large family, 'Vasudaiva Kutumbakam'. He was a skilled and impressive preacher, who drew large crowds wherever he traveled, yet most of Ramananda’s poems and sayings were not preserved. The result is the lack of texts that modern scholars and historians can use to unearth the life of Ramananda.

Ramananda was a learned man. Many of the books which are supposed to have been written by him such as Sri Vaishnava, Matanbuj Bhaskar and Sri Ramarachan Padhti are still available. He is also said to have authored a commentary called AnandabhAShya.

Focus on Rama
Ramananda taught his followers to pay special attention to Rama and his wife Sita. Because of political dangers looming on the horizon, Rama was a natural focus of worship due to his position as the faultless prince. As outlined in the famous Sanskrit epic, the Ramayana, Rama, while an incarnation of the deity, 'Vishnu', was a successful warrior capable of defeating the terrible ten-headed demon-king of the Rakshasas, Ravana.

Shabad of Ramananda in Guru Granth Sahib
Where should I go?
My home is filled with bliss.
My consciousness does not go out wandering.
My mind has become crippled. || 1 || Pause ||

One day, a desire welled up in my mind.
I ground up sandalwood, along with several fragrant oils.
I went to God’s place, and worshipped Him there.
That God showed me the Guru, within my own mind. || 1 ||

Wherever I go, I find water and stones.
You are totally pervading and permeating in all.
I have searched through all the Vedas and the Puraanas.
I would go there, only if the Lord were not here. || 2 ||

I am a sacrifice to You, O my True Guru.
You have cut through all my confusion and doubt.
Raamanand’s Lord and Master is the All-pervading Lord God.
The Word of the Guru’s Shabad eradicates the karma of millions of past actions. || 3 || 1 ||

One poem of Swami Ramanand is recorded in the Guru Granth Sahib, the holy book of the Sikhs. This poem, called the Raga Basant, describes Ramananda’s profound philosophy. This poem, originally written in Hindi, professes Ramananda’s great teaching of the giving up of caste for Ram, or the, “true guru”, who remains, “all-pervasive and forever unchanging.” This poem expresses Ramananda’s belief that Rama is a sturdy foundation in whom one should place faith, instead of the caste system. By comparing the “Brahma in the temple” with the Brahma that “dwelt in his own heart”, Ramananda compares the highest caste to the highest spiritual figure, Lord Rama. In this poem, Ramananda also uses many themes that appeared in his other works. In this poem, is the theme of the heart. Ramananda believed that in the state of deep spiritual communion, when the disturbances of the mind are gone and the attention is not searching for outward distractions, all consciousness settles into the core: the heart. Ramananda believed that if one looks deep into themselves, they are able to find that everything has always been held in the heart and there is no need to search the Vedas for God, for God abides within the mind. Along with his practices of yoga, Ramananda thought that looking into oneself and into one’s heart will bring the feeling of absolute contentment and interconnection. Another theme that is prevailing in the works of Ramananda and many other Hindu texts is that of perfume. The scent is tantalizing and is sometimes called the Celestial Drink. The blissful scent can be thought of as a tool to awaken sacred ardour upon a spiritual journey. The third theme in the Raga Basant is water. In this poem, water is used as a metaphor to describe each human being on earth as a small drop of water within the Ocean of Rama. This metaphor suggests the insignificance of one man, or an entire caste of humans, in comparison to Lord Rama.

Controversy about his importance - Much about the life of Ramananda and his contributions to India are disputed between scholars. Dearth of information has led to disputes about the birthplace, life, and death of Ramananda. More significantly, while texts written by his disciples indicate that Ramananda was significant in the lives of people in Northern India while he was living, modern scholars argue whether he was in fact as influential as he is described to be. Given the historical importance of the Ramanandi sect, many scholars find it hard to believe that there is such little information in the sectarian literature on the events which led to its formation. Scholars have tried to reconstruct the early history of the Ramanandi sect, yet there is such a scarcity of information that scholars reach different conclusions. Some scholars believe that Ramananda truly was a great Hindu saint, yet others feel that from the lack of information provided, that Ramananda was not a historically important enough saint to have caused others to write details of his life. It seems to many scholars, that the life of Ramananda is far inferior to the accounts of the lives of his disciples who have extensive biographies written about them.