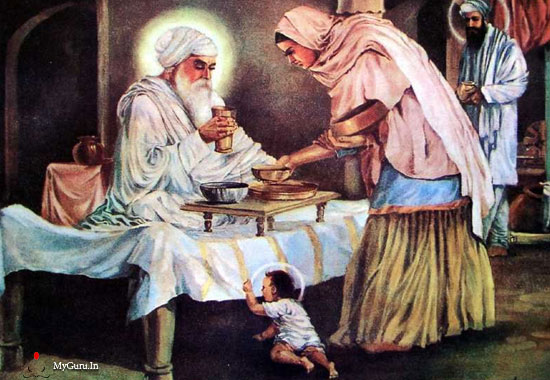 History
Was the younger daughter of the third Guru of the Sikhs, Guru Amar Das.
She was married to Bhai Jetha (Guru Ram Das) who was a most devoted Sikh of Guru Amar Das. He was a dedicated Sikh and enjoyed serving the Guru and his Sangat.
She had two brothers named Bhai Mohan ji and Bhai Mohri ji and an older sister named Bibi Dani ji, who was married to a pious Sikh named Bhai Rama.
She was born to Mata Mansa Devi on 19 January 1535 (21 Magh 1591 Bk) at Basarke Gillan, a village near Amritsar. She was married on 18 February 1554 to Bhai Jetha, a Sodhi Khatri from Lahore. Bhai Jetha later moved to Goindval which was an upcoming Sikh town and carried out voluntary service (Sewa) in the construction of the Baoli Sahib (sacred well).
Guru Amar Das was very impressed with the Sewa performed by Bhai Jetha and so a marriage was arranged between Bibi Bhani, his daughter and a dedicated devotee, Bhai Jehta. After marriage, the couple remained in Goindval serving the Guru and the congregation (Sangat). Later, on the near completion of construction of the Gurdwara at Goindval, Bhai Jetha was deputed by the Guru to go and establish a habitation at present-day Amritsar. This place was also later caller Ramdasar. Here, on a piece of land gifted, according to one version, by Emperor Akbar to Bibi Bhani at the time of his visit to Guru Amar Das.
Three sons, Prith Chand (1558), Mahadev (1560) and (Guru) Arjan Dev (1563) were born to her. Bibi Bhani Joti Joy (died) at Goindval on 9 April 1598.

Nature of Story
First Story
One day while Bhani tended to her aging father\'s bath, he became absorbed in meditation. The stool on which he sat gave way. Bani thrust her arm beneath it to hold in place, and in doing so received an injury. Though blood flowed from her arm, she continued to support her father, the Guru. When he notice what had happened, Guru Amar Das, asked what boon he might grant her as a reward for her steadfast endurance. Bibi Bhani asked only that she and her heirs might ever continue to be in the service of the Sikhs and remain absorbed in the divine.

Second Story
One day a faithful Sikh asked Guru Ji\'s permission to offer Bibi Bhani money to purchase new dresses, as the ones she would wear were very old, so that she would not appear disadvantaged in the company of her friends. On hearing of the offer she repeated Satguru Sri Guru Nanak Dev Ji Maharaj\'s words:

\'False is gold, false is silver, false are those who wear them.\'

She then reminded the Sikh that the best use, to which the money could be applied, was to fill the kitchen of Satguru Ji with corn and to supply the needs of the Sikhs of the Guru.

Third Story
One day he settled down on the wooden meditation platform he liked and began slipping into his meditation. Then his daughter, Bibi Bhani, noticed something. The leg of the platform he was sitting on was breaking! She thought, “If he leans to that side, as he often does, the leg of the platform will break.” She immediately put her hand under the leg of the platform where the wood was going to break and she held it tightly. The pain was intense but she kept her hand there without making a sound. She didn’t want to disturb her father’s meditation. The pain got worse and worse. Her hand began to bleed. For a long time she kept her hand there just feeling her deep love for her father, “It is my blessing to serve him,” she thought. In her intense pain she thought, “I hope my divine father does not get disturbed in his meditation.”
Guru came out of his meditation. When he saw what she had done, he was shocked. She had kept her hand under the sharp wood for a long time. Her hand was injured and bleeding. He said “My dear girl, you didn’t have to do that!!” He quickly went to treat her wound. All she said was “I couldn’t stand the thought of your meditation being disturbed.” He was so touched with her sweet devotion that he asked her to request a blessing.

“I am already very blessed, what more can I ask for,” she replied. “Please, you must ask something, ask for a blessing and I will give it to you.” Ss she asked him, “Bless me that the Guruship should remain in our family line from now on.” “I bless you with what you ask,” the Guru said. “However, the creative flow of the Guruship has been changed and there will be some consequences. But the Sodhi family has the strength to carry the responsibility of the throne of Siri Guru Nanak.” He blessed her with what she asked. All the Gurus from that time on were directly related to Bibi Bhani and her husband who became Guru Ram Das Ji. From her devotion, she was given a blessing that altered the course of history. Such is the power of devotion, and such is the blessing of the Guru.

Gift of Bibi Bhani
Bibi Bhani received a portion of land for a wedding present from the Emperor Akbar. Her husband, Jetha, purchased adjacent land. After he was appointed Guru Raam Das, her husband began excavation of a sarovar, or tank, on their land which would one day come to be known as Amritsar, the sacred pool surrounding Gurdwara Harmandir Sahib which is commonly called the Golden Temple. Amritsar is also the location of Akal Takhat the highest seat of religious authority in Sikhism.