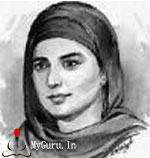 Bibi Dalair Kaur Ji was a seventeenth century Sikh woman who fought against the Moghuls. She rallied 100 female Sikhs against them. She was killed and is considered to be a martyr among Sikhs.

History
Allah Ho Akbar!!!!!" screamed the Moghul soldiers, with their heads down, one hand on the horse-reigns, one hand weilding a mighty sword, they charged up the hill determined to smash the fortress gates this time. A thousand arrows and bullets rained down from the over the high fortress walls. It was useless, they couldn\'t penetrate AnandPur, the Khalsa fort.
"Retreat! Retreat!" screamed a desparate General as he saw hundreds of his imperial forces drop to the ground. Back at base camp, an emergency meeting of General\'s was called. The jungle nights were cold, and hundreds of camp fires where seen all around the base of the hill. Anandpur Fort stood on top, inpenetrable and untouched.
"9 Months! 9 Long months in this wretched, mosquito infested jungle. When are those Fortress rats going to give up?" said Wajir Khan.
"Be patient General, even rats die one day" replied Jabardast Khan. "Patient! How much more patient can we be? We have over 1 million soldiers out there. One Million soldiers to kill that infidel Gobind Singh. Yet his Khalsa army has killed tens of thousands of our soldiers and we have barely scratched the fortress walls" thundered a raging Wajir Khan.
"Sit down Generals. As leader of the royal forces of his excellency Emperor Aurangzeb, I will make the decisions." Said Aurangzeb\'s General. He continued, "Let us review our tactics. We have 22 local Hindu Kings with us, we have the victorious armies of Wajir Khan and Jabardast Khan with us, and we have the miltary might of the Moghul Empire. One million soldiers, countless cannons, and an unlimited supply of arms. Fellow generals we have underestimated these Khalsa rats. Even though there can be no more than 10,000 soldiers in the fort, we have not been able to beat them through sheer force. They have the superior position on the hill top. Think of another plan Generals. We need a new strategy."

"Patience is the best strategy. It has been several months since we imposed the seige. I believe our seige is working fellow Generals. We have cut off all supplies of food and water to the fort, those rats must be almost starved by now. If we just wait another few months, victory will be ours." Said Jabardast Khan.
"It\'s already December, there\'s a cold and miserable winter infront of us. Our camp hospitals are bursting at the seams with sick soldiers, those wretched floods last month brought so many mystery illnesses, that hundreds of soldiers are dying every day. There is low moral amongst the troops and thousands of soldiers are deserting us every week, because they think we will never be able to capture the Fort. Do any of us went to spend the rest of winter like this? NO. I suggest we lure out the Khalsa rats and finish them with our swords!" raged Wajir Khan.

The room full of Generals stood up and cheered.
"Beloved Son and Guru, listen to your mother," said Mata Gujree. She continued, "You are beautiful and you have your father\'s blessing upon your head. Whatever you say is law, but I urge you to reconsider the offer of safe passage from the Royal forces. Aurangzeb himself has given his word, promising on the Koran that no harm will come to us."
"Mata Jee, it\'s nothing but a trick. Why would they offer us safe passage after they\'ve been trying to kill us for 9 months?" said Guru Gobind Singh jee.

"Guru jee, you are our Father, we live for you and we will die for you," said Bhai Mani Singh, "but Guru jee we started off with 10,000 Khalsa warriors and now we have less than a thousand. Guru Jee, you are the King of this world and the King of the next world. It makes no difference to us if we live at your feet in this world or the next, but Guru jee this world needs you. You must survive, if you stay here you will die with the rest of us."

"O Beloved Khalsa jee, I would rather die fighting than walk away from this battle. But Khalsa jee, you are my Guru and you have ordered that we accept the offer of safe passage and leave the fort. So we will leave tommorow. But, I don\'t intend to leave the fort unguarded. Bibi Dalair Kaur Jee, you are my trusted Sikh. I want you and the rest of my daughters to stay here along with 10 Khalsa men." Said Guru Gobind Singh Jee.

"Pita Jee, your words are true, bless us so we may do this duty and bring honour to the Khalsa," replied Bibi Dalair Kaur jee.

While some of the Combined Moghul forces pursued the Khalsa, the rest rode to the fort to claim victory. Bibi Dalair Kaur saw that her beloved Guru and Khalsa had been betrayed and she prepared the Guru\'s daughters for battle. The Moghul soldiers broke their ranks and rode to the fort, burning and looting everything in their way. Bibi Dalair Kaur stood up infront of her sister\'s and spoke with passion, "Sisters, we have given our heads to our Guru-Father at the amrit ceremony. We have lived for Truth, now the time has come to die for it. Sisters, remember that we are all trained warriors and we will die fighting rather than be taken as slaves. Sisters, pick up you guns and get in position it\'s a good day to die BOLAY SO NIHAL SAT SRI AKAL."

The enemy soldiers thought that the fort was empty and were taken aback by the sudden rain of bullets. Within a few minutes, hundreds of dead soldiers lay outside the fort. Seeing this, the remaining soldiers left their positions and ran for their lives. Wajir Khan was furious at not having captured the fort; he started screaming at his men "FIRE THE CANNONS! FIRE THE CANNONS." Intense cannon fire succeeded in breaking through a wall of the fort. No-one could be seen inside so the ground troops charged towards the fort. Suddenly, they were showered with bullets and line after line of soldiers dropped dead to the ground.
Wajir Khan was ruthless and kept sending more and more troops, eventually the Khalsa women ran out of bullets. Wajir Khan smiled as capture was imminent.

Bibi Dalair Kaur jee gathered her sister\'s together and spoke with her Guru-Father\'s blessing, "Sisters, we have fought well, now we our time has come to die. It is up to us to die with honour. Remember the brave women from RajPut. When their husbands had died in battle and their fort was about to be captured, they would all all jump into a fire and burn to death rather than let the enemy dishonour them. This was how their religion taught them to preserve their honour. Our Guru-Father is always with his Sikhs and protects his sons and daughter\'s honour. Sisters, our Guru-Father has trained us as warriors and we will die fighting alongside our husbands and brothers. Remember we are lionesses."
The enemy was advancing so rapidly that there was no time for further speeches. Bibi Dalair Kaur jee gave the signal and all Khalsa women drew their swords and positioned themselves behind the damaged wall. This was the only way for the enemy to enter.
Mighty soldiers began climbing in over the piles of rubble. When they saw 100 Khalsa women and 10 Khalsa men ready for battle they stopped in their tracks. They were expecting to find hundreds of Khalsa men, they never knew women could be warriors.
Witnessing the events from a distance, Wajir Khan yelled, "Cowards are you afraid of women? They are gifts for you, capture them and do what you want with the rewards of your hunt." Bibi Dalair Kaur yelled back, "We are the hunters, not the hunted. Come forward and find out for yourself!"
Wajir Khan took up the challenge and rode into the fort with his men. Khalsa Lionesses attacked them from every corner and he dropped dead to the ground. Not knowing how many other Khalsa warriors were in the fort the Moghuls retreated yet again.
Jabardast Khan started yelling at his men "Fire the Cannons! Fire The Cannons." Intense cannon fire destroyed the already weakened wall. The fort\'s inner compound was clearly visible and no Khalsa warriors could be seen. Jabardast Khan was was convinced that no one was left alive and this time he took thousands of troops with him into the fort. They searched every inch of the fort but did not find anyone. Jabardast Khan was furious. Where did the Khalsa lionesses disappear too? He screamed at his men to find them. The soldiers searched cautiously, expecting a surprise attack from any direction. Finally they concluded that the remaining Khalsa warriors must have escaped through some secret passage.

Orders were given to abandon the search and initiate looting. The very soldiers who were afraid for their lives started searching for wealth inside the fort. When they removed the piles of rubble from the fallen wall they found no wealth, they only found the bodies of our martyrs. The faces of Guru Gobind Singh jee\'s daughters were still radiant yet peaceful.
They and their Khalsa brothers and husbands had stood by their leader, Bibi Dalair Kaur. They died fighting to the death and received an eternal place at our Guru-Father\'s Lotus Feet.
Dayh Shiva bar mohe ehai, subh Karman Tay kabhoon na taro. Na daro ar so jab jaa-e laro, nischai kar apanee jeet karo. Ar Sikh ho aapnay hee man hau, eh lalach hao gun tao ucharo. Jab aav kee a-odh nidhaan banai, at hee ran mai tab joojh maro. 231. (Guru Gobind Singh)
Give me this boon Lord, that I never refrain from righteous deeds. That I have no fear when fighting the enemy, that I attain victory with faith and fortitude, That I keep your teachings close to my mind. Lord, my desire is that I sing your praises and when the end of this life draws near, may I die fighting, with limitless courage in the battlefield.