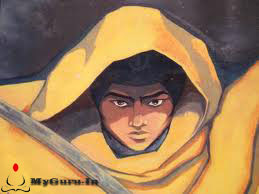 A contingent of Turkish soldiers was on active patrol in the area of Majha, as a Sikh jatha was to pass through there to go to Anandpur sahib to participate in Dashmesh Guru's, Guru Gobind Singh Ji’s Dharam Yudh. Additional responsibilities assigned to this contingent included, instilling fear among people who either express sympathy with the Sikh jatha or welcome it or serve it any way. For this reason, the Turkish contingent always moved ahead of the Sikh Jatha.

Three miles from the road leading to Anandpur Sahib in Hoshiarpur District, is a village, named Talban. Bibi Deep Kaur, the subject of our story, was resident of this village. There was only one Sikh house in this village -- Bibi Deep Kaur's residence. Today her husband wasn't home. He had already left for participating in Dashmesh Guru's Dharam Yudh. When Bibi heard of Jatha's arrival. She was filled with emotions of self-service. She explained her emotions and desire to other women in her neighborhood. But the Turkish soldiers had successfully frightened the residence of this village. Thus no one was willing to accompany her. She thought to herself, how a person could stay behind if they had even the slightest love for Maharaj; with this thought she went alone to get darshan of the gursikhs.

"Let them not proceed, if someone doesn't want to" Deep Kaur told herself. For how could one stay behind if they have even the slightest love for the Guru in their heart. Holding onto the quest of love and a glimpse of the Sikh Jatha, Deep Kaur proceeded alone and awaited the arrival of Sant-Sipahis.

Suddenly dust arose from afar. Her face brightened with joy. Her quest for Jatha's sight grew stronger. Now she started walking on the road toward the rising dust storm. Soon she realized that this was not the Jatha of Sant- Sipahis. Rather it was the contingent of evil Turkish soldiers. Surprised, she quickly moved off the road and tried to hide herself by sitting next to a tree. As the Turkish contingent got closer, it's commander caught sight of Deep Kaur. Seeing the youthful beauty, he lost all self-control.

As she was waiting, dust suddenly arose from afar. Her face brightened with joy. Her quest for the Jatha's sight grew stronger. Now she started walking on the road towards the rising dust storm. Soon she realized that these were not the gursikhs advancing her way, but rather the Turkish soldiers. Surprised, she quickly moved off the road and tried to hide herself by sitting next to a tree. As the soldiers approached, their commander caught sight of Deep Kaur. Seeing the youthful beauty,
He commandingly asked. "Who are you?"

"Whoever I am. How does it matter to you?" She answered fearlessly.
Commander's attraction grew stronger with her challenge.
He remarked softly, "By Shehansha's (ruler's) orders, I have been deputed to keep a watch on Sikhs in this area. Since the Sikh Jatha is heading this way, I need to ascertain whether you are a Sikh."
"If I were to be a Sikh, then?"
"Then we will have to arrest and sent you to Lahore." Deep Kaur heard his response

But, being a Sikh how could she lie. Fearlessly, she announced, "I am Sikh."
The Turk Commander was astonished by her fearlessness. But as captive of her beauty, by now, he was aroused beyond any self-control. He spoke softly and said, "Beautiful, I am responsible for capturing Sikhs. You are a Sikh. I should arrest you, but I cannot do that. I cannot fulfil my responsibilities. For I have a heart that worships beauty and it is your's now. I am your captive."

Deep Kaur's face reddened with anger. She lashed out saying, "You should be ashamed of yourself talking to me like this."
"What is there to be ashamed of where hearts have met? I am your. Accept me and I shall keep you as my Begum (wife)." He said.
"I am a Sikh and married. If you ever uttered anything like this again I will snatch your tongue." Deep Kaur responded. By now she was shaking with anger.
"What kind of a beauty it would be that doesn't exhibit enticing or alluring behavior? I am impressed by your behavior. Now don't delay anymore and let's go. What are you going to get from these wild Sikhs?" Saying the commander dismounted from his horse and moved towards Deep Kaur while his contingent waited on the opposite side of the road.

As he dismounted, Deep Kaur stood up. Seeing him approach her, she challengingly said "Beware, if you touch my body I will not spare you."

The commander ignored her warning and instead proceeded to hug her. Deep Kaur pulled back with lightening speed. By now she had her kirpan in her hand. As the commander approached, she struck him in his stomach with the kirpan. There was blood everywhere, with painful cries; he simply dropped to the ground.
By now Dashmesh's daughter had jumped into the war. As the wounded Commander sat on the ground, she viciously attacked him once again, sending his evil soul to burn in hell. Before the Turkish soldiers could advance, she moved swiftly to take control of the commander's sword and was well-prepared for self-defence. Seeing their dying commander, the soldiers advanced shaking in anger and simultaneously

Attacked her. However, the Dashmesh's daughter wasn't scared about being out-numbered. Like a lioness, she stood fast for the challenge. She used the sword like a singh would and soon two soldiers fell to the ground while several others were severely wounded. Deep Kaur too sustained deep wounds on her face and neck. Although her wounds were profusely bleeding, she kept her courage and continued fighting.

Far on the road, the sound of horses could be heard once again. This time the Gursikhs Jatha was approaching. As the Turkish soldiers saw the Gursikhs they got scared, immediately mounted their horses and ran for their lives. The bodies of the Commander and five of his associates were left behind, lying cold on the ground. The sight of approaching Sikh brothers filled Deep Kaur filled with joy. She quickly tried to move towards the road but couldn't. She had lost too much blood and thus was unable to walk. She simply fell unconscious to the ground. Sikh Jatha saw unconscious Deep Kaur and 6 dead bodies of Turkish soldier, upon reaching the location. It did not take them long to comprehend the situation.
Immediately, they spread a bed for Dashmesh's daughter, dressed her wounds and awaken her with medication. Then carrying her along, the Jatha proceeded to Anandpur Sahib for participating in the Dashmesh father's Dharam Yudh.
Fully aware of the situation, our Dashmesh father Guru Gobind Singh Ji was strolling outside his court awaiting the arrival of this Jatha. Seeing them arrive, he joyfully advanced to receive them and asked "Where is my daughter?"
Jatha members were confused. They did not understand the meaning of this question, since there were many Sikh women among the Jatha. Who did Guru Sahib honor with daughter's address? They could not understand.
In the meantime, Guru Sahib quickly moved towards the palki (palanquin) carrying the wounded Deep Kaur. Raising the palki curtain, he hugged and kissed her forehead, saying "This is my daughter Deep Kaur. Because of such daughter my Panth shall remain in Chardi Kala."