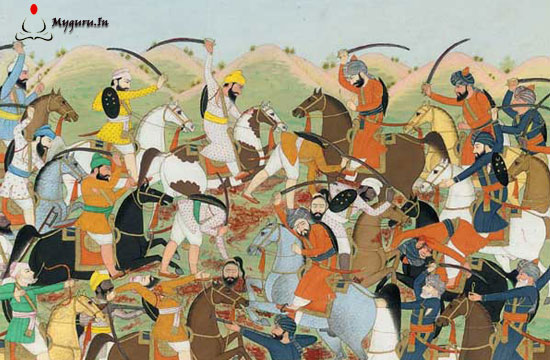 Forty (chali) liberated ones (mukte), is how a band of 40 brave Sikhs.
In 1704 the city of Anandpur Sahib, the residence of Guru Gobind Singh Ji was under extended siege by the combined forces of the Mughal army Khidrana, also called Isharsar, on 29 December 1705 and Hill chiefs. The siege took its toll and the meager provisions were completely exhausted, with the Sikhs having to live on leaves and bark from the trees.

History
Within the Sikh ranks there was a group of Jats of the Majha region, they had had enough and they made up their mind that they wanted to escape and leave Anandpur Sahib. After much deliberation they made their way to the Guru, and their leader Maha Singh told him of their desire to leave. Guru Gobind Singh Ji understood their situation but asked them to stay and fight, but all his persuasive arguments fell on deaf ears, they were resolute, they wanted to leave.

Obviously we can never understand the hardship the Sikhs had to endure and the desperate situation the Sikhs were in but even so, when we think of the great sacrifices made by Sikhs like Bhai Mani Singh, Bhai Taru Singh, Bhai Mati Das, Bhai Sati Das and Bundha Singh to name but a few it is hard to understand what possessed the Majha Sikhs to put pen to paper and write a disclaimer that “Guru Gobind Singh Ji, we are no longer your Sikhs and you are no longer our Guru,” it must go down as a most shameful episode in Sikh history.

The deserters were from the Majha region and one of the villages in this area was called Jhabal, and in the village lived a woman named Mai Bhago. She was known for her faith and courage and when she saw the 40 Sikhs approaching in the distance she went out to meet them. She asked news about Guru Gobind Singh Ji, and when she heard their sorry tale her blood boiled. She could not contain herself, she charged them with cowardice and a lack of faith in their Guru. She felt, as did the other women folk of the area that they had brought shame on their region. Mai Bhago was determined to wipe this stain of infamy of the Majha sikhs. She told all the women folk not to be hospitable to the Sikhs; she shamed and censured the Singh\'s for their cowardice.

Mai Bhago donned on men’s clothing and told them that either they stay behind and look after the children or they try to make amends and return with her to the Guru. Ashamed by their act of desertion they vowed to put things right and mounted their horses and set off towards Frozepur.

Knowing that the enemy Wazir Khan was advancing to attack the Guru, Mai Bhago’s group took up positions near a place called Khidrana. As the enemy forces came close the Sikhs pounced on them, a fierce battle ensued; although heavily outnumbered the Sikhs attacked with ferocity and many were killed on both sides. The dust raised by the battle alerted Guru Sahib Ji who by this time had vacated Anandpur Sahib, he joined his Sikhs on a sandy hill (tibbi) and shot arrows on the enemy. As the battle raged Guru Sahib Ji mounted his horse and led his contingent from the west. The enemy could not stand a sudden attack on its left flank and after sustaining heavy loses withdrew leaving the dead and dying on the battlefield.

Guru Gobind Singh Ji dismounted from his horse and surveyed the scene. He saw one of his Sikhs lying wounded and recognized him as Maha Singh, the leader of the 40 deserters. Guru Ji sat beside him and put his head on his lap and wiped away the blood and tears from his eyes, just as a father would a son. Guru Ji was greatly impressed and pleased by his Sikhs. “Ask whatever you will, the house of Guru Nanak is open to you” spoke Guru Ji but Maha Singh only had one thing on his mind, the letter of desertion. “O Lord of all the heavens, if you are in mercy then please forgives me and my companions for our betrayal, and all that I pray for now is that you tear up the letter we handed to you.” The all knowing Guru had kept the letter on his person knowing full well that it would be needed, Guru Ji took it out and tore it in front of Maha Singh.
“You have redeemed yourself here and in the hereafter.” The forty deserters who lay dead in the battlefield were blessed by Guru Sahib Ji as the chali mukhtay –the forty liberated ones. A grand gurdwara now stands at the site of the battle, known as GurdwaraTibbi Sahib, Mukhtsar.
Mai Bhago in the meantime was also lying in the battlefield wounded. Guru Ji blessed her for her courage and fortitude in leading the Sikhs into battle and regaining their honour. In time Mai Bhago recovered from her wounds and remained in the Guru’s presence after the battle. Mai Bhago followed Guru Sahib Ji to Nanded. In 1708 when Guru Ji ascended the heavens Mata Ji settled at Bidhar about 200 km from Nanded where she lived to a ripe old age. Mata Bhago Ji is held in the utmost high regard by Sikhs and considered a saint. Her spear and musket that she used in the battle at Mukhatsar is still preserved at Takhat Sri Hazur Sahib, Nanded. Gurdwara Tibbi Sahib is associated with the Tenth Guru, Guru Gobind Singh Ji. This place is situated in high sandy mound (tibbi means a small hillock). Guru Sahib chose this place to stay on reaching Muktsar as it provided a very good view of the area. When the battle between the Forty Muktas and the Mughals was in progress, Guru Ji helped his sikhs by shooting arrows at the Mughals from this place. The birthdays of Guru Nanak Dev Ji, Guru Gobind Singh Ji and shahidi purab of Guru Arjun Dev Ji are celebrated with great fervour here. Besides, the Magh Mela is organized on the 12th and 13th of January to commemorate the sacrifice of the Forty Muktas. Diwali and Baisakhi are also celebrated with enthusiasm.

The Khalsa Women: The 40 Liberated Ones. Forty of Guru Gobind Singh\'s men deserted him at Anadpur. They were afraid to die, afraid for their lives, desperate and starving. They were so concerned with their own survival, that they willing wrote and signed a letter denouncing their Guru. When they arrived home, rather than finding wives joyful for their return, happy that they were alive, what did they find? Wives who were appalled that they had deserted Guru Gobind Singh Ji Sahib. The male side of this story is that the men returned to fight for the Guru and died in the battle, liberating their souls in the process. But the hidden story is:

That the consciousness of their Khalsa wives is what inspired them to do it. The Khalsa women consciously chose widowhood. They would have rather born the burden of seeing their husbands’ dead, of being left with the sorrow of being widowed, of raising their children alone, of having to find their economic security in the absence of a husband -they would have rather endured all this than to see their husbands walk away from their destinies and betray their Guru.

These women knew - the duty and role of a Khalsa wife is to serve the soul of her husband and deliver him to his destiny and to God and Guru no matter what. Who liberated these men? Themselves? No - it was the grace, security, wisdom and blessing of their wives: that allowed them to be liberated. It was the meditative discipline, the trust in the Divine, the attunement with God\'s Will through the experience of their own Spirits that allowed these women to look their husbands in the eye and say: "You are dead to us, no matter what! Go back and stand with your Guru or leave!"
Minus the spiritual understanding of the women, the 40 Liberated Ones would have never returned to their Guru and would have gone through lifetimes of karma to repay the mistake. These Khalsa women understood non-attachment, security in the Divine, living in the Will of God, loyalty to the Guru so well that they could fearlessly send their husbands to their death, knowing that it was better for their husbands to die in service of the Guru than to live any other way. And the pain of losing their husbands was less to them than the pain of seeing their husbands loses their path to God. Publicly- the valour of the men prevailed. Privately- the wisdom of the women prevailed.
"It was this joint consciousness, valour and wisdom, male and female that displayed the true power of the Khalsa."