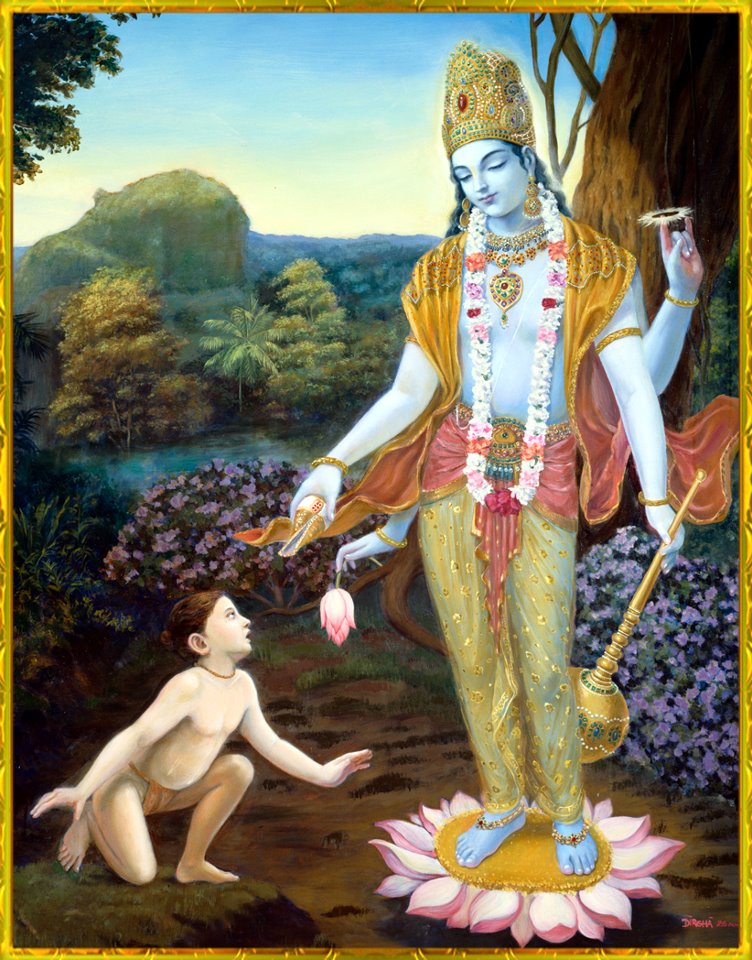 Dhruva is a devotee of the god Vishnu according to Hindu mythology. Dhruva was the son of Uttānapāda. His tale is recorded in the Vishnu Purana and the Bhagavata Purana.

Dhruva was born a son of the King Uttānapāda (the son of Svayambhuva Manu) and his wife Suniti (or Sunrita, the daughter of Dharma). His full name is. The king also
had another son Uttama, born to his second queen Suruchi, who was the preferred object of his affection. Once, when Dhruva was but a child of five years of age, the two princes playfully raced towards their father's lap. But, the headstrong Suruchi chided Dhruva and insulted him for trying to woo the attention of his father, when he did not deserve it because "he was not born to her." She further mocked at his plight, by asking him to redeem himself by seeking Vishnu's blessings.

Suniti consoled the distraught child, by asking him to take Suruchi's words seriously and to observe penance in meditation of the Lord. She bid him farewell as he set out on a lonely journey to the forest. Dhruva was determined to seek for himself his rightful place, and noticing this resolve, the divine sage Narada appeared before him and tried to desist him from assuming a severe austerity upon himself at such a tender age. But, Dhruva's fierce determination knew no bounds, and the astonished sage guided him towards his goal by teaching him the rituals and mantras. The one mantra which Narada taught and which was effectively used by Dhruva was Om Namo Bhagavate Vasudevaya. Vishnu Purana also mentions this mantra.

Having been advised, Dhruva started his penance, and went without food and water for six months, his mind fixed on the Lord. The austerity of his penance shook the heavens and the Lord appeared before him, but the child would not open his eyes because he was still merged in his inner vision of Vishnu's form described to him by
Narada. Lord Vishnu had to adopt a strategy of causing that inner vision to disappear. Immediately Dhruva opened his eyes, and, seeing outside what he had been seeing all along in his mental vision, prostrated himself before the Lord. But he could not utter a single word. The Lord touched his right cheek by his divine conch and that sparked off his speech. Out poured forth a beautiful poem of praise of the Lord in 12 powerful verses, which together are called Dhruva-stuti.
Vishnu Purana gives a slightly different account here. When Vishnu was pleased with Dhruva's tapasya and asked him to ask for a varadāna (grant of wishes), Dhruva said
that he (being an uneducated child) did not know how to sing the praise of Lord Vishnu, and therefore asked the varadāna of a knowledge of stuti (hymn in the praise of Vishnu). Other persons would have asked for worldly or heavenly pleasures, or for moksha at most, but Dhruva had no personal desire. Renunciation of all desires is regarded to be essential for eternal peace in Hinduism: this is the meaning of Dhruva-pada. That was the reason why the Saptarshis decided to give Dhruva the most revered seat of a Star.

The Dhruva-stuti as mentioned in the Vishnu Purana is an extended version of the Vedic Purusha sukta and is quite different from the Dhruva-stuti of Bhagavata Purana.
Having spent a long time in the Lord's remembrance he even forgot the objective of his penance, and only asked for a life in memory of the Lord. Pleased by his penance
and by his stuti, Vishnu granted his wish and further decreed that the lad would attain Dhruvapada - the state where he would become a celestial body which would not
even be touched by the Maha Pralaya, or the final cataclysm.

Dhruva returned to his kingdom, to be warmly received by his family, and attained the crown at the age of six. He ruled for many decades in a fair and just manner.