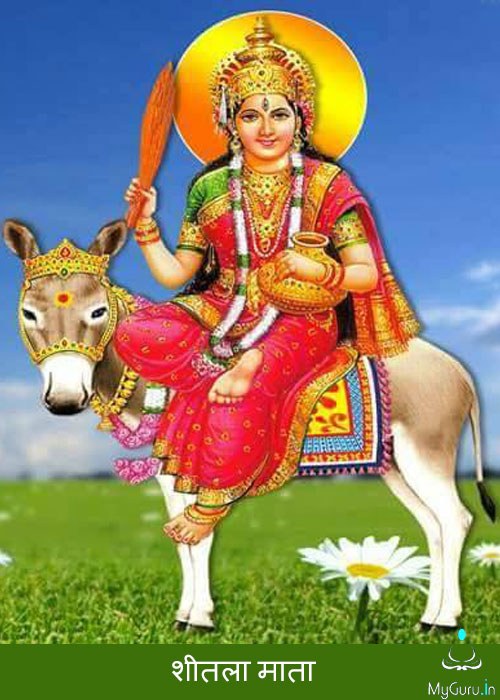 Goddess Sheetla Ji Ke E-Greetings
In Hinduism, Goddess Shitala, or Sheetala Mata, is considered an aspect of Shakti. Popularly she is the Hindu goddess of small pox in  and is known to spread the dreaded disease and cure it. In rural , she is also considered as an incarnation of Goddess Parvati and Durga, which are two forms of Shakti. Goddess Shitala is popular as Mariamman in Tamil Nadu. She is undoubtedly one of the most popular rural deities and her origin can be traced to the days of Nature Worship.

Legend has it that Goddess Shitala wears a red-colored dress and rides around the villages in  on a donkey (ass) and inflicting people with the dreaded pox – small pox, chicken pox etc. Symbolically, she represents Nature’s power of generating viruses causing disease and Nature’s healing power and is of tribal origin. She is depicted having four hands. In her four hands she carries a silver broom, winnow fan, small bowl and a pitcher with Gangajal, holy water from River Ganga. Occasionally, she is depicted with two hands carrying a broom and pitcher. Symbolically, Goddess Sheetala idol also emphasizes the need for cleanliness.

According to Puranas, Shitala, the cooling one, was created by Lord Brahma. She was promised by Brahma that she will be worshipped as a Goddess on earth but she should carry the seeds of lentils. In folktales in, the lentil is ‘Urad dal.’ She then asked for a companion and she was directed to Lord Shiva, who blessed her and created Jvara Asura (the fever demon). It is said that he was created from the sweat of Lord Shiva.

Shitala and Jvara Asura remained in Devaloka along with other gods and goddess. They used a donkey to transport the lentils to wherever they went. But the lentil seeds one day turned into smallpox germs and start to spread the disease among gods and goddesses. Finally, fed up with Goddess Shitala, gods asked her to go and settle in heaven where she will be worshipped. Shitala and Jvara Asura came down to earth and started hunting for a place to stay.

They went to the court of King Birat, an ardent devotee of Shiva. He agreed to worship her and give a place in his kingdom but she will not get the respect given to Shiva. An angry Shitala demanded supremacy over all other gods and when King Birat did not budge. She spread different kinds of pox on the land and finally, the King had to agree to her wishes. Soon the disease and all its after effects were miraculously cured.

The most important festival dedicated to her takes place in Chaitra month, the Ashtami day after Purnima (full moon) in the month is observed as Sheetala Ashtami. There are famous temples dedicated to Shitala Devi in Haryana, Punjab, Rajasthan, Himachal Pradesh, Uttarakhand, Uttar Pradesh and Bihar.