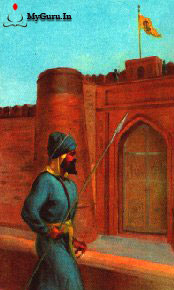 Hari singh Bhangi (Bhangi Misl) was a large Sikh Misl centered around a village around Amritsar. It was founded in the early 18th century by Hari Singh Dhillon. The name "Bhangi" came from the addiction of Hashish (Bhang) of Hari Singh Dhillon\'s predecessor Bhuma Singh Dhillon. It grew in strength and territory to cover an area from Attock to Multan and emerged as the strongest power in the western Punjab region. However, deaths among the leadership during the late 1760s reduced the Misl\'s power. The Bhangi misl engaged in numerous power struggles with the Sukerchakia Misl until they were severely weakened at the Battle of Basin and the loss of Lahore to Ranjit Singh.
Bhangi Misl held the possession of Zamzama, the famous cannon, which was at the time named Bhangi Toap, Bhangianwala Toap and Bhangian di Top, names it retains to this day.
Whole Sikh army was divided into two Taruna and Buddha Dal, (50 years before Ranjit Singh upto his time) Taruna for young and Buddha for old. He had two songs Jhanda Singh and Ganda singh. They took care of Bhangi Misl after him, later Ranjit singh absorbed this Misl into Sarkar Khalsa. The territories of Bhangi Misl are Cis-Satluj region Buriya and Jagadhri on the Jamuna (204 villages) and on the Satluk bajidpur, Bhedian, Firozepur, Khai, Muhalim, Naggar, Sahjara, Sataragarh, Singhpura and Wan. Bari Doab Amritsar, Bhairowal, Bulaki (29 villages), Chinna, Chubhal, Haibatpur, Karmala, Kohali, Lahore, Majitha, Morowal, Multan (1772-1780) Naushera, Sainsra, Sirhali, Taran Taran, Vairowal. Lots of area in Rachna doab too. This misl was stronger than Sukerchakia misl of Ranjit singh.