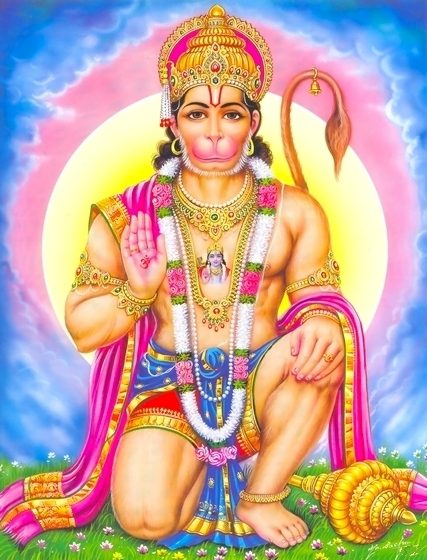 Lord Hanuman Ji Ke Articles
Origin of Lord Hanuman
Lord Hanuman was born as the son of Vanar raj (king) Kesari (father) and Anjani (mother). He belonged to the monkey (vanar) race and was very powerful.
He is also known as Bajarang Bali. It consists of two words: Bajarang and Bali. Bajarang means with a strong iron-like body. Bali means all powerful.
Other names of Lord Hanuman are Pavan-Putra (meaning son of Vayu or wind), Maruti, Kesari-nandana (son of Kesari), Anjani-putra and Anjaneya (son of Anjani).
Lord Hanuman is the incarnation of Lord Shiva. Lord Shiva took birth in the form of Hanuman to serve Lord Rama and destroy Ravan, the demon king of Lanka.
Lord Hanuman was very strong, intelligent and kind to all the living beings. He was a worshipper and devotee of Lord Rama. He believed in devotion and sacrifice.
Lord Hanuman's birthday (Hanuman Jayanti) is on the full moon day (paurnima) of the Hindu lunar month of Chaitra.

Meeting with Lord Rama
When Hanuman grew up he became a minister at the court of Sugreeva, the King of Kishkindha. Vali was the elder brother of Sugreeva. Once Vali, who was fighting with a rakshasa (demon), entered a cave with his opponent; he did not come out for a long time. Blood began to flow from the cave, so Sugreeva thought that Vali was dead. He returned to Kishkindha and became its king. But a little later, Vali returned and drove out Sugreeva. Sugreeva and his ministers hid themselves in the Malaya mountains; Vali could not enter this region.
When Sree Rama, His wife Sita and His brother Lakshman were in the forest, a rakshasa (demon) by name of Ravan took Sita away by force. Rama was in great grief. He was wandering the forests in search of her when He came to the Malaya mountains. Sugreeva saw Him there with Lakshman. Sugreeva and his companions were very fearful that Vali had sent Sree Rama and Lakshman to kill them. So Sugreeva was very anxious to know who those handsome young men were. Whom should he send to talk to Them? Finally he chose Hanuman.
Hanuman, on the orders of Sugreeva, had masked himself as a Brahman to try and find out if the two mighty bowmen had really been sent by Vali, the vengeful brother of Sugreeva. However on seeing Them, all doubts were immediately wiped from the mind of Hanuman. He immediately revealed his true form.
Hanuman was an excellent ambassador. He could easily understand the nature of other people. As soon as he saw Rama and Lakshman, he realised that They were not deceivers but noble persons. In soft and pleasing words he asked Them who they were and told Them about himself. Rama was very happy when He heard the words of Hanuman. He said to Lakshman, "Did you hear his words? Even an enemy with his sword drawn would be pacified by such words. If a ruler has such a messenger, his efforts will always be successful."
Hanuman took Rama and Lakshman to Sugreeva. He had hopes that these brave young men would make Sugreeva king again.

Powerful Lord Hanuman
Rama and Sugreeva promised to help each other. One of the things Sugreeva did was to send Hanuman to look for Sita. When Hanuman was searching for Sita he met Sampati who was brother of Jatayu. Jatayu was killed while he was trying to stop Sita from being kidnapped by Ravan. Sampati told Hanuman that he had seen Sita being kept prisoner in the Ashokvatika in Lanka.
When Hanuman reached Lanka and met Ravan, Ravan did not offer Hanuman a chair to sit on.
So Hanuman created his own throne by extending his tail, coiling it under him and then sitting on top of it, in front of Ravan.
Ravan was shocked to see this and called on his demons to set Hanuman's tail on fire. Ravan's soldiers started tying rags to Hanuman's tail to set it on fire. As they did that, Hanuman made his tail longer and longer. The exhausted demons stopped trying to tie more rags and set fire to his tail.
Now it was Hanuman's turn. With his tail on fire, he jumped all over Lanka, setting the entire city ablaze.
When the battle between Ravan and Rama was being fought, Lakshman got hit with an arrow. The vaidya (doctor) told Rama that if Lakshman smelled a shrub called 'Sanjivani' from the mountain 'Gandhamadan' he will recover. Hanuman went to the mountain but as he could not recognize the shrub, he uprooted the entire mountain and brought it to the doctor.

Hanuman the perfect devotee
Hanuman is a pure devotee and a prefect servant of Lord Rama. Everything that he did was only to please Lord Rama, whether it was building bridges, fighting demons or flying across the country to fetch life saving herbs. When he saw Sita in Ravan's Lanka, he not only delivered the message of Lord Rama to her but also destroyed the forest, killed many demons and burnt down half of Lanka. Hanuman never expected anything in return from Lord Rama.
Hanuman had a special place in the heart of Lord Rama. Hanuman's devotion to Rama was profound. Anything and everything, without Him, seemed futile to Hanuman. Once, when Sita presented a pearl necklace to him, he tried to find Ram in each pearl. When he couldn't, he was disappointed and he tore it apart and threw it away.
She was surprised and asked for an explanation. In reply, Hanuman tore open his chest with his nails and showed everyone the word 'Rama' engraved on his heart.
Even today the idol of Hanuman, the god of protection, is found in the temples of Rama.

Lord Hanuman's devotion and obedience to Lord Rama
Once, after Lord Rama returned to His kingdom from exile, a group of sages started arguing about the superiority of The Lord's Name over The Lord Himself. Many opinions were given, yet they were not able to come to any conclusion, so they approached Sage Narada. Sage Narada requested a few days' time to give an answer to this question.
Sage Narada thought it best to seek Lord Hanuman's help in solving the problem. He approached Hanuman and requested his assistance. Hanuman agreed. Sage Narada told Hanuman, "Make some mischief that will enrage Lord Rama's Guru so much that He will order Lord Rama to punish you. Then leave the rest to me."
Hanuman at once started working on this task. As expected, Lord Rama's Guru became very angry at Hanuman and told Lord Rama, "Tomorrow morning You must punish Hanuman for the wrong that he has done. In front of the sages and all the townspeople, You will aim Your powerful arrows at him so that all will witness and learn a lesson about what happens when one annoys the Guru." Lord Rama was surprised at His devoted servitor's behaviour. But, He had complete obedience unto His Guru, so He accepted the Guru's instruction and went back to His palace with a heavy heart. In the meantime Sage Narada told Hanuman to chant Lord Rama's Name when Lord Rama shot the arrows at him.
The next day dawned and all the sages and townspeople gathered next to the river to witness the punishment that would be given to Hanuman. Lord Rama with a very heavy heart aimed His first arrow at Hanuman and let go. The arrow headed straight for Hanuman but changed direction at the last moment and fell to the ground without touching him. Hanuman was standing with his eyes closed, chanting Lord Rama's Name deeply. All the arrows that Lord Rama aimed at Hanuman missed him and went in different directions.
When the arrows were exhausted, Lord Rama looked at His Guru, Who then asked Lord Rama to use the divine weapon (Brahma Astra) that would not miss Its target. At that point Sage Narada interrupted and convinced the Guru, "O great sage, You are great among the Gurus. By forgiving Hanuman, You could give the best example of being a loving and compassionate Guru." The Guru listened to Sage Narada's advice and forgave Hanuman.
When the incident was over, Sage Narada approached all the sages gathered at the river. They had got their answer through this incident and unanimously agreed on the power of The Lord's Name.
Back
Comments:
Posted Comments
"ATI SUNDER DHANYAWAD AAPKA."JAI SRI RAM" "
Posted By:  Ashwani sharma
"Jai shri ram."
Posted By:  Sunny kaalia
नवरात्री Navratri
श्री दुर्गा कवच
Free Kundali Predictions
Todays Panchang
Calulate Your Rashi
Free Tarot Reading
Astro Remedies
Buddhism
Nakshatra Characteristics
श्री साईं बाबा Shri Sai Baba
राशिफल Horoscope
Calculators
जन्मदिन विवरण Birthday Details
स्वप्न विश्लेषण Dream Analysis
प्रश्नावलियाँ Prashnavalis
व्रत & पूजा विधि Vrat & Pooja Vidhi
आरती संग्रह Aarti Sangrah
चालीसा संग्रह Chalisa Sangrah
स्तुति संग्रह Stuti Sangrah
स्त्रोत्र संग्रह Strotra Sangrah
मंत्र संग्रह Mantra Sangrah
कवच संग्रह Kavach Sangrah
सुन्दरकाण्ड Sundarkand
नामावली संग्रह Namavali Sangrah
Vedas
Spiritual Books
Pilgrimage in India
Sms Collection
Thoughts
Inspirations
Baby Names
Palmistry Tutorials
Vastu Shastra
Feng Shui
Yearly Festival Calendar
Vegetarian Restaurants
Vegetarian Recipes
Essays
Explore Myguru
Status
Kanwar Yatra(कांवड़ यात्रा)
धार्मिक स्थल
Gurudwaras(गुरूद्वारे)
अदभुत धार्मिक स्थल
विशेष धार्मिक स्थल
मुख्य धार्मिक स्थल