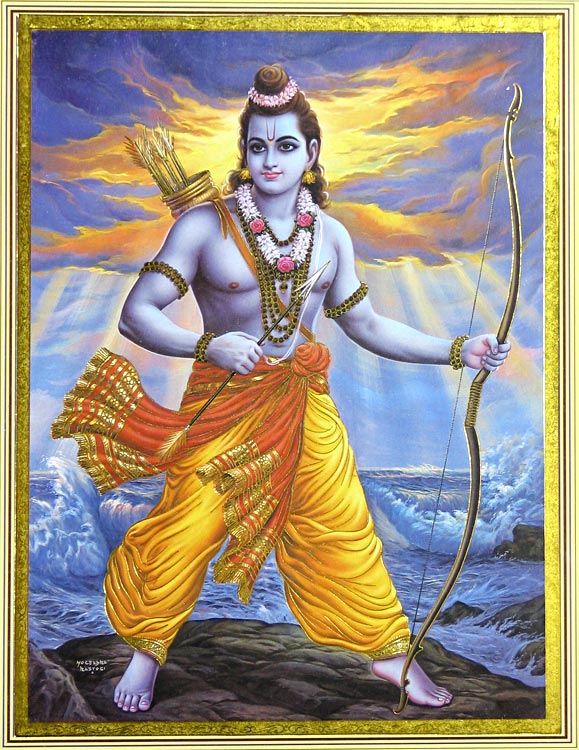 Rama was the perfect avatar of the Supreme Protector Vishnu. Ram has always been a well loved God among all the Hindu deities because of the several moralistic and virtuous characteristics that he brings along with him.

Sri Rama is the epitome of how a man should be. He symbolizes the ideal man full of values and morals.Rama is also referred to as the Maryada Purushottama, which when translated means the idealistic man.

Lord Rama was put on the earth to destroy the evil forces of those times and bring about morality and virtues.

Lord Rama had several wonderful characteristics. He always spoke the truth. Rama had a tremendous sense of morality. Lord Rama was not only the ideal son but also an ideal husband, and most important of all an ideal king to his subjects.

Rama and Sita, both of them are widely accepted by all Hindus to be actual historical figures that are loved and revered by Indians all over.

Rama and Sita are the two main characters of the great Hindu epic of Ramayana. The Ramayana is also known as the Romance of Rama. It was written by the ancient Sanskrit poet Valmiki.

All Hindus believe that Rama lived in the times when life was not good. The historians purport another belief that was not defined until the 11th century AD. Then Tulsidas, wrote another wonderful version of the Sanskrit epic "Ramayana” and turned it into "Ramcharitmanas". This was the writing that greatly etched in the minds of the Hindus all the characteristics that Lord Rama is popular for. Rama, the god went about to give rise to various devotional groups.

Shri Rama was a man who was full of virtues from head to toe. Lord Rama was kind and compassionate. He was also magnanimous and sensitive to the way everyone felt around him. Lord Rama looked handsome and conducted himself well. Shri Ram had a wonderful personality. He was born into a noble family and was the son of a king and conducted himself thus. He was generous, chivalrous and not afraid to speak the truth. He was very simple and down to earth.

Lord Rama is considered as an exemplary son who is unequalled in the world. He resembled his father, Dasaratha in every way and had wonderful good qualities.

He never lied. He always respected learned men and scholars and elders. People loved him and he adored them in return. He was just how a king should be.

He could reach out to the people with his charming personality and touch their very souls.

He was attractive and had all the qualities of a king's son. His subjects loved him and that was without any doubt.

Lord Rama’s superior qualities were showcased in the way he lived.

Lord Rama is considered to be the seventh incarnation of Lord Vishnu. He was specially put on the earth to kill the demon king Ravana. Lord Rama is known for his wonderful personality and simplicity and every Indian man would love to emulate him.

Shri Ram is one of the popular and famous gods of the Hindu religion and was loved by millions of Hindus of all ages..

Lord Rama is one of the commonly worshipped gods of the Hindu religion and no Hindu shrine would ever be complete without the idols of Rama and Sita in it.

Shri Ram is known as a part of Lord Vishnu. He is considered to be the preserver of the Universe. Ram is the great lord of Hanuman, who helped him in getting back his wife Sita from the clutches of the demon Ravana.

Lord Rama shared a wonderful relationship with all around him. He was the obedient son to his father Dashratha the king of Ayodhya. He was a wonderful brother to all his brothers but especially was devoted towards his younger brother, Lakshman. He dearly loved his wife Sita and his children Luv and Kush. He proved to be a wonderful friend to Hanuman. He treated his subjects like his children and they in turn worshiped the ground that he trod on.