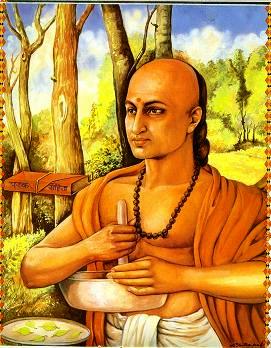 Charaka, sometimes spelled Caraka, born c. 300 BC was one of the principal contributors to the ancient art and science of Ayurveda, a system of medicine

and lifestyle developed in Ancient India. He is sometimes referred to as the Father of Indian Medicine.


Acharya Charaka and the Ayurveda
The term Caraka is a label said to apply to ‘wandering scholars’ or ‘wandering physicians.’ Buddhist's also claim that Charaka was Buddhist.

According to Charaka's translations health and disease are not predetermined and life may be prolonged by human effort and attention to lifestyle. As per

Indian heritage and science of Ayurvedic system, prevention of all types of diseases have a more prominent place than treatment, including restructuring

of life style to align with the course of nature and four seasons, which will guarantee complete wellness.

The following statements are attributed to Acharya Charaka:

A physician who fails to enter the body of a patient with the lamp of knowledge and understanding can never treat diseases. He should first study all

the factors, including environment, which influence a patient's disease, and then prescribe treatment. It is more important to prevent the occurrence of

disease than to seek a cure.

These remarks appear obvious today, though they were often not heeded, and were made by Charaka, in his famous Ayurvedic treatise Charaka Samhita.

The treatise contains many such remarks which are held in reverence even today. Some of them are in the fields of physiology, etiology and embryology.

Charaka was the first physician to present the concept of digestion, metabolism and immunity. According to his translations of the Vedas, a body functions

because it contains three dosha or principles, namely movement (vata), transformation (pitta) and lubrication and stability (kapha). The doshas are also

sometimes called humours, namely, bile, phlegm and wind. These dosha are produced when dhatus (blood, flesh and marrow) act upon the food eaten. For

the same quantity of food eaten, one body, however, produces dosha in an amount different from another body. That is why one body is different from

another. For instance, it is more weighty, stronger, more energetic.

Further, illness is caused when the balance among the three dosha in a human body is disturbed. To restore the balance he prescribed medicinal drugs.

Although he was aware of germs in the body, he did not give them any importance.

Charaka knew the fundamentals of genetics[citation needed]. For instance, he knew the factors determining the sex of a child. A genetic defect in a child,

like lameness or blindness, he said, was not due to any defect in the mother or the father, but in the ovum or sperm of the parents (an accepted fact

Charaka studied the anatomy of the human body and various organs. He gave 360 as the total number of bones, including teeth, present in the body. He

connected to the entire body through 13 main channels. Apart from these channels, there were countless other ones of varying sizes which supplied not

only nutrients to various tissues but also provided passage to waste products. He also claimed that any obstruction in the main channels led to a disease

or deformity in the body.

Under the guidance of the ancient physician Atreya, Agnivesa had written an encyclopedic treatise in the eighth century B.C. However, it was only when

Charaka revised this treatise that it gained popularity and came to be known as Charakasamhita. For two millennia it remained a standard work on the

subject and was translated into many foreign languages, including Arabic and Latin.


Contributions
According to the Charaka tradition, there existed six schools of medicine, founded by the disciples of the sage Punarvasu Ātreya. Each of his disciples,

Agnivesha, Bhela, Jatukarna, Parushara, Haria, and Ksharapani, composed a Samhitā. Of these, the one composed by Agnivesha was considered the best.