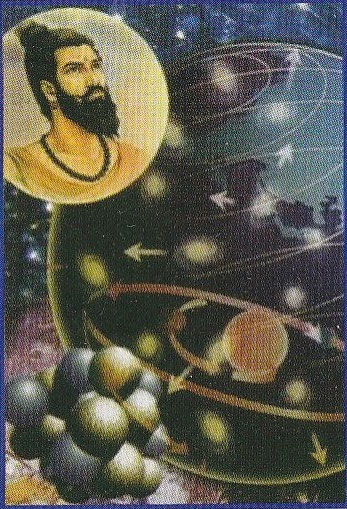 It has been claimed that Kashyapa, later known as Kanada (Sanskrit: कणाद; also transliterated as Canada as well as other forms) was a Hindu sage and philosopher who founded the philosophical school of Vaisheshika and authored the text Vaisheshika Sutra. He probably lived around the 2nd century BCE, while other sources claim he lived in the 6th Century BCE. It is believed that he was born in Prabhas Kshetra (near Dwaraka) in Gujarat, India.

His primary area of study was Rasavādam, considered to be a type of alchemy. He is said to have believed that all living beings are composed of five elements: water, fire, earth, air, ether. Vegetables have only water, insects have water and fire, birds have water, fire, earth and air, and Humans, the top of the creation, have ether - the sense of discrimination (time, space, mind) are one. He theorized that Gurutva(Hindi/Sanskrit for Gravity) was responsible for the falling of objects on the Earth.
Conception of Anu (Atom)

Many believe it was Kanada who originated the idea that paramanu (atom) was an indestructible particle of matter. An interesting story states that this theory occurred to him while he was walking with food in his hand. As he nibbled at the food in his hand, throwing away the small particles, it occurred to him that he could not divide the food into further parts and thus the idea of a matter which cannot be divided further came into existence. He called that indivisible matter anu, i.e. atom.

Adherents of the school of philosophy founded by Kanada, considered the atom to be indestructible, and hence eternal. They believed atoms to be minute objects invisible to the naked eye which come into being and vanish in an instant. Vaiseshikas further held that atoms of same substance combined with each other to produce dvyanuka (biatomic molecules) and tryanuka (triatomic molecules). Kanada also put forward the idea that atoms could be combined in various ways to produce chemical changes in presence of other factors such as heat. He gave blackening of earthen pot and ripening of fruit as examples of this phenomenon.

This Indian conception of the atom was developed independently[ and possibly prior (depending on which dates one accepts for the life of Kanada) to the development of the idea in the Greco-Roman world. Indian theories about the atom are greatly abstract and enmeshed in philosophy as they were based on logic and not on personal experience or experimentation. Thus the Indian theories lacked an empirical base, but in the words of A.L. Basham, the veteran Australian Indologist “they were brilliant imaginative explanations of the physical structure of the world, and in a large measure, agreed with the discoveries of modern physics.”

According to author Dilip M. Salwi, "if Kanada’s sutras are analysed, one would find that his atomic theory was far more advanced than those forwarded later by the Greek philosophers, Leucippus and Democritus."