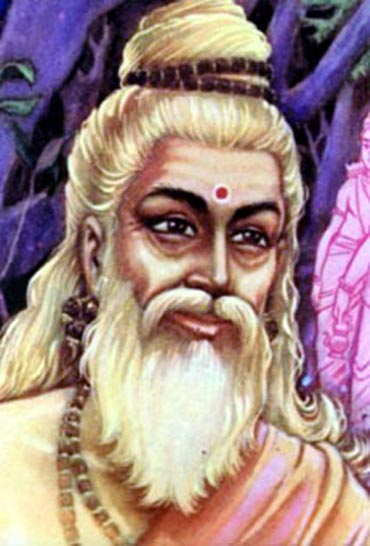 Maharishi Vishvamitra is one of the most venerated rishis or sages of ancient times in India. He is also credited as the author of most of Mandala 3 of the Rigveda,
including the Gayatri Mantra. The Puranas mention that only 24 rishis since antiquity have understood the whole meaning of, and thus wielded the whole power of, the Gayatri Mantra. Vishvamitra is supposed to be the first and Yajnavalkya the last.

Vishvamitra was a king in ancient India, also called Kaushika "descendant of Kusha". He was a valiant warrior and the great-grandson of a great king named Kusha. The
Valmiki Ramayana, prose 51 of Bala Kanda, starts with the story of Vishvamitra:
There was a king named Kusha (not to be confused with Kusha, son of Rama), a brainchild of Brahma, and Kusha's son was the powerful and verily righteous Kushanabha. One who is highly renowned by the name Gaadhi was the son of Kushanabha, and Gaadhi's son is this great-saint of great resplendence, Vishvamitra.

Vishvamitra ruled the earth, and this great-resplendent king ruled the kingdom for many thousands of years.

His story also appears in various Puranas, however they show variations from the Ramayana. The Vishnu Purana and Harivamsha chapter 27 (dynasty of Amaavasu) of
Mahabharatha narrates the birth of Vishvamitra. According to Vishnu Purana, kushika married a damsel belonging to Purukutsa dynasty (later called as Shatamarshana
lineage - descendents of the Ikshvaku king Trasadasyu) and had a son by name Gaadhi who had a daughter named Satyavati (not to be confused with the Satyavati of
Mahabharata).

Conflict with Vasistha
On one of his exploits, he and his soldiers took rest in the ashram of Rishi Vasistha. There, his whole army was well fed and taken care of. This caused a doubt in the
king's mind as to how it was possible for this simple ashram to take care of all the arrangements to feed an entire army. He expressed his surprise to the sage. Vasistha


replied, "O king, this feast that you have partaken with your kinsmen, has been provided by my calf Nandini (sometimes referred as Sabala), who was gifted to me by
Indra. You must know that she is the daughter of Indra's cow Kamadhenu. She provides me with everything I need."

Kaushika was filled with wondn he heard this. He began to think that possessing this cow would mean a lot to him; after all, the sage did not have to provide food
and sustenance for a large army everyday. He expressed a desire to the sage for obtaining Nandini from him. Vasistha was polite, but steadfast in his refusal. He would

not be tempted by the offer of untold wealth that was made by Kaushika, for after all who can set a price on a cow, which can readily yield all the riches in the world.

The king grew exceedingly angry. He insulted the Brahmarishi with harsh words, and ordered his soldiers to seize the cow, and drive it to his kingdom. Nandini was the

daughter of Kamdhenu and hence she forcefully protested against the soldiers. Using her powers, she saved the life of Vashishtha.

Alternative Version
Vasistha destroys Kaushika's entire army by the simple use of his great mystic and spiritual powers, breathing the Aum syllable. Vasistha also thus kills one hundred of

Kaushika then undertakes a tapasya for several years to please Shiva, who bestows upon him the knowledge of celestial weaponry. He proudly goes to Vasistha's ashram
again, and uses all kinds of powerful weapons to destroy Vasistha and his hermitage. He succeeds in the latter but not in the former.

An enraged Vasistha brings out his brahmadanda, a wooden stick imbued with the power of Brahma. It consumes Kaushika's most powerful weapons, including the
brahmastra. Vasistha then attempts to attack Kaushika, but his anger is allayed by the Devas. Kaushika is left humiliated while Vasistha restores his hermitage.

Tapasya
This incident made a deep impression on the King. He realized that the power obtained by penances was far greater than mere physical might. He renounced his
kingdom and began his quest to become a greater rishi than Vasistha. He took on the name Vishvamitra. It is very interesting to see all the challenges that Viswamitra
faced in his life to become a Brahmarishi, before eventually giving up the greed to possess the cow. After many trials and undergoing many austerities, Vishvamitra at
last obtained the title of Brahmarishi from Vasistha himself. During this time he had a daughter named Shakuntala (who appears in the Mahabharata) with Menaka, an
apsara in the court of Indra. Son of Shakuntala became a great emperor. He came to be known as Emperor Bharata, in whose name the land of India got its name

Alternative version
Kaushika seeks to attain the same spiritual power as Vasistha, to become his equal, a brahmarishi. He undertakes a fierce penance for one thousand years, after which

Brahma names him a Rajarishi, or royal sage.

After another long penance of thousand years, Brahma names him a rishi, thus leaving his royal lineage permanently. And Brahma suggest him to take Bramharshi grade

from his guru Vashishta only, as he only has the power to call you as Brahmarshi.

At this point, Indra, the king of Swarga attempts to test the tapasvin by sending Menaka, an apsara to seduce him. Kaushik then lives with Menaka for 10 years. They

have a baby girl Shakuntala. Kaushik becomes angry as Menaka had destroyed his years of meditation and thus he cursed her that she won't possess her beauty, of which

she was proud, in next birth.

Kaushika now goes to the banks of the river Kaushiki, which is the spirit of his own sister. After many thousands of years of penance, Brahma names him maharishi, but
also tells him that he hasn't become a jitendriya yet, lacking control over his passions. This is brought to light to Kaushika when he angrily curses Rambha, an apsara
sent by Indra to seduce Kaushika again, to become a stone for a thousand years.

Rise to Brahmarishi
After cursing Rambha, Kaushika goes to the highest mountain of the Himalayas to perform an even more severe tapasya for over a thousand years. He ceases to eat, and reduces his breathing to a bare minimum.
He is tested again by Indra, who comes as a poor Brahmin begging for food just as Kaushika is ready to break a fast of many years by eating some rice. Kaushika
instantly gives his food away to Indra and resumes his meditation. Kaushika also finally masters his passions, refusing to be provoked by any of Indra's testing and
seductive interferences.

At the penultimate culmination of a multi-thousand year journey, Kaushika's yogic power is at a peak. At this point, Brahma, at the head of the Devas led by Indra,

names Kaushika a brahmarishi, and names him Vishvamitra, or Friend of All for his unlimited compassion. He is also embraced by Vasistha, and their enmity is instantly

ended.
Vishvamitra's Characteristics
As a former king, and one over as vast a realm as he had been, Vishvamitra was known to retain a regal and often haughty bearing. He was known for his high temper

and often cursed people in his anger, thereby depleting his yogic powers obtained by much penance. People feared his temper and prayed that their actions might not

get misconstrued by the touchy sage.

However, as a former king, Vishvamitra also possessed great compassion for all beings. Having taken pity on Trishanku, he willingly exhausted all the punya he gained

from his tapas, to enable him to ascend to the heavens. Following his attainment of the status of brahmarishi, he was known to use the power of his tapas to help

anyone who was in need, whatever the cost to himself.

Gayatri Mantra
Sage Vishvamitra was the one who found revered great Mantra - The Gayatri Mantra. It is a mantra found in the Rig, Yajur, and Sama Vedas. Gayathri is actually a
"Chandas" or meter.

Legends
Vishvamitra is famous in many legendary stories and in different works of Sanatana dharma.

Trisanku
Indra prevents Trisanku from ascending to Heaven in physical form-from The Freer Ramayana Another story Vishvamitra is known for is his creation of his own version of Svarga or heaven, called Trisanku Svarga. When a proud King Trisanku asked his guru, Vasistha, to send him to heaven in his own body, the guru responded that the body cannot ascend to heaven.

King Trisanku then asked Vasistha's hundred sons to send him to heaven. The sons, outraged that Trisanku should not come to them when their father had refused, cursed him to be a Chandala, or untouchable. Trisanku was transformed into a person with body smeared of ash, clothed in black and wearing Iron jewellery. Since none of his subjects could recognize him, he was driven out of the kingdom.

He came across the sage Vishvamitra, who agreed to help him. Visvamitra organized a great sacrifice and ritual propitiating the Devas, pleading that they accept

Trisanku in heaven. Not one Deva responded. Angered, Viswamitra used his yogic powers and ordered Trisanku to rise to heaven. Miraculously, Trisanku rose into the

sky until he reached heaven, where he was pushed back down by Indra.

Enraged even more by this, the powerful Visvamitra then commenced the creation of another Universe (including another Brahma) for Trisanku. He had only completed

the Universe when Brihaspati ordered him to stop. Trisanku, however, did not enjoy Trisanku Svarga, he remained fixed in the sky and was transformed into a

In the process of forming a new universe, Vishvamitra used up all the tapas he had gained from his austerities. Therefore after the Trisanku episode, Vishvamitra had to

start his prayers again to attain the status of a Brahma Rishi, to equal Vashistha.

Ambarisha's Sacrifice
While undertaking a penance, Kaushika helps a boy named Shunashepa who has been sold by his parents to be sacrificed at Ambarisha's yagna to please Varuna, the

God of the Oceans. The king's son Rohit does not want to be the one sacrificed, as was originally promised to Varuna, so young Sunashepa is being taken. A devastated

and terrified Sunashepa falls at the feet of Kaushika, who is deep in meditation, and begs for his help.

Kaushika teaches secret mantras to Sunashepa. The boy sings these mantras at the ceremony, and is blessed by Indra and Varuna, and Harishchandra's ceremony is also

In the Ramayana
In the Indian epic Ramayana, Vishvamitra is the preceptor of Rama, prince of Ayodhya and the seventh Avatar of Vishnu, and his brother Lakshmana.

Vishvamitra gives them the knowledge of the Devastras or celestial weaponry (bala and adi bala), trains them in advanced religion and guides them to kill powerful

demons like Tataka, Maricha and Subahu. He also leads them to the svayamvara ceremony for princess Sita, who becomes the wife of Rama.

Vishvamitra In Buddhism
In the Buddhist Vinaya Pitaka of the Mahavagga (I.245) section the Buddha pays respect to Vishwamitra by declaring that the Veda in its true form was declared to the

priests he refused to pay homage to the altered version.

have sprung from a "surprised" reaction of Vishvamitra. The other, more likely, explanation, is that a group of descendants decided to split from the main group and

started their own branch of this line.

flows turbulently as she is said to be unmarried. Many Maithil Brahmins are of Kaushik gotra with moola Nikutwar barhi, Nikutwar nikuti and garh.
Bhrindwal Brahmin of Haryana belongs to Kaushik gotra.