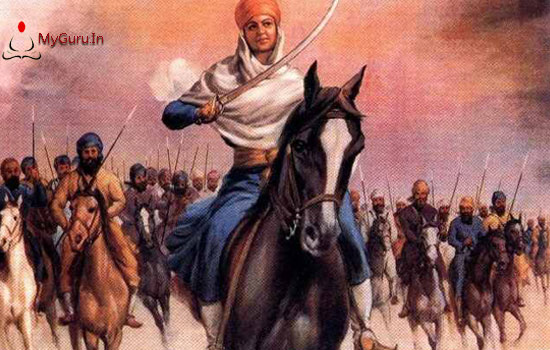 Mai Bhago Kaur was a Sikh woman who led Sikh soldiers against the Mughals in 1705. She killed several enemy soldiers on the battlefield, and is considered to be a saint by Sikhs. Mai Bhago was a descendant of Bhai Pero Shah, the younger brother of Bhai Langah a Dhillon Jatt a Chief of 84 villages who had converted to Sikhism during the time of Guru Arjan Dev Ji (1563–1606), the fifth Sikh Guru.

Profile
Mai Bhago was born at her ancestral village of Jhabal Kalan in present-day Amritsar district of the Punjab, she was married to Bhai Nidhan Singh Varaich of Patti, Mai Bhago was a staunch Sikh by birth and upbringing. and She had brothers who were also Staunch Sikhs. Her parents took her to Anandpur Sahib when she was young to have glimpse of Guru Gobind Singh ji (1666–1708) the 10th Sikh Guru.

Battle of Mughal
Mughals and hilly chiefs had surrounded Anandpur and were demanding it be evacuated. They announced that any Sikh who would say that "he/she is not anymore a Sikh of Guru Gobind" will be left untouched while others will be done to death. A group of 40 Sikhs, led by Mahan Singh Brar told Guru Gobind Singh that they were not his Sikhs anymore. The Guru told them that they will have to write it in a document that says, "We are not your Sikhs anymore" and sign it. All forty Sikhs wrote their names on this document but one of then declined to sign; \'Bedava\' and left Guru Gobind Singh. Mai Bhago was distressed to hear that some of the Sikhs of her neighborhood who had gone to Anandpur to fight for Guru Gobind Singh had deserted him under adverse conditions. Hearing her taunts, these Sikhs were ashamed at their deed. She rallied the deserters persuading them to meet the Guru and apologize to him. she set off along with them and some other Sikhs to seek out the Guru, then travelling across the Malva region.

Meanwhile, Guru Gobind Singh had to evacuate the fort of Anandpur; his children were lost in the confusion. Two youngest one\'s Zorawar Singh and Fateh Singh went along with their grandmother (mother of Guru Gobind Singh). While elder one\'s Ajit Singh and Jhujhar Singh were with their father. Then at battle of Chamkaur Guru\'s elder sons attained martyrdom, Guru was saved by five Sikhs and he evacuated Chamkaur and was travelling in Malva region, being pursued by Mughal forces of Aurungzeb. Travelling day and night in the Jungles of Malva region, imperial Mughal forces were in constant pursuit of Guru. Guru Gobind Singh reached village of Khidrana, when Mai Bhago and the men, she was leading stopped near the dhab or pool of Khidrana where an imperial army in pursuit of Guru Gobind Singh had almost overtaken him. They challenged the pursuing host and fought furiously forcing it to retreat. All forty Sikhs attained martyrdom in this pitched battle, in which Guru himself was supporting them with a shower of arrows from a nearby high ground, found all the men except one Mahan Singh, killed when he visited the battlefield. Mai Bhago and Guru Gobind Singh ji were the sole survivors of this fiercely fought battle.

Mahan Singh, who had been seriously wounded, also died as the Guru took him into his lap. Guru Gobind Singh blessed those forty dead as the Forty Liberated Ones. He took into his care Mai Bhago who had also suffered injury in the battle. She thereafter stayed on with Guru Gobind Singh as one of his bodyguard, in male attire. After the death of Guru Gobind Singh at Nanded in 1708, she retired further south. She settled down at Jinvara, 11 km from Bidar in Karnataka where, immersed in meditation, she lived to attain a ripe old age. Her hut in Jinvara has now been converted into Gurdwara Tap Asthan Mai Bhago. At Nanded, too, a hall within the compound of Takht Sachkhand. Sri Hazur Sahib marking the site of her residence is known as Bunga Mai Bhago.