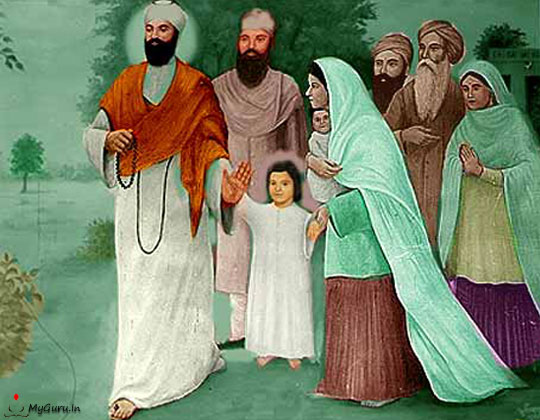 Mata Sullakhni Ji (1473-1560) Bhai Kahn Singh Nabha writes that a Mata was born in the village Pakhoke; district Gurdaspur to Moolchand Chand Khatri and Mata Chando. Her father was a pious Chona Khatri merchant, who was the tax collector (patwari) of his village. The year is not given, but on the basis of her year of marriage, one can guess that it was around 1473. The writer states that she was born with "super characteristics," but neglects to elaborate what these were. Mata Sullakhni Ji was married to Guru Nanak Dev Ji and they lived in Nankana Sahib for fourteen years. Guru Nanak Dev Ji took great interest in his family and gave them his love and attention. He demonstrated by his actions, that salvation is reached best through a married family life.

History
Earlier writers have written many interesting stories leading up to the wedding day. It seems that Nanak refused to follow the marriage rituals dictated by the Brahmins of the day. He stated that any time would be an auspicious time for the wedding. There was no need to cast horoscopes as he was not superstitious. He consistently tried to break old traditions. Moolchand became alarmed and refused to marry his daughter to Guru Nanak. In those days, this would have been considered to be a major scandal. The news of this scandal spread quickly. Another gentleman, Shri Bhandari of the city of Batala offered his daughter for marriage with Guru Nanak. But Moolchand did not wish Guru Nanak to marry Bhandari\'s daughter. He thought that this could be interpreted as rejection of his daughter and, therefore, would be an insult to his family\'s honour. He conspired to kill Nanak instead. Moolchand arranged for the Brahmin priests to debate marriage rituals with the Guru. They made him sit near a damaged wall. It had been raining and the winds were strong. Everyone expected the wall to collapse. The story goes that Sulakhani, not wishing to break her relationship after two year engagement, sent an old woman to warn Guru Nanak of the conspiracy. Guru Nanak told the woman not to worry, the wall would not collapse for years to come. Indeed, that same wall stands today in Batala and a famous gurdwara has been built to commemorate the spot.

In 1487, the marriage finally did take place, and it did ignore the Brahmin rituals. Guru Nanak and his bride took four rounds instead of the prescribed seven around the sacred fire. It is said that he also spoke a few words at the ceremony. Unfortunately, these words were not duly recorded and nothing has been written regarding Sulakhani\'s thoughts or sentiments on the subject. That the event had a profound effect on her can certainly be taken for granted. At any rate, the marriage party and celebrations were a grand and impressive event attended by the rich and influential people of that lime. Early writers have indicated that it was a most grand affair as befitted the daughter of the town\'s tax collector.

Guru Nanak lived with Mata Sulakhani at Nankana Sahib for fourteen years. Once again, he broke the conventions of the time, by living apart from both his family and hers. His sister Nanaki would try to neutralise any criticism by explaining to one and all, that her brother needed his own space, and a lot of it, because of all the people who were constantly drawn to him, to listen to his teaching. During those fourteen years, Sulakhani gave birth to two sons, Shri Chand and Lakhmi Das. Nanak took great interest in his family and gave them his love and attention. He demonstrated by his actions, his personal commitment to his teachings; that salvation is reached best through a married family life. His teaching of the equality of women must have also been demonstrated by the way he treated his wife, Sulakhani\'s self-esteem and happiness grew each day. She, in turn, supportcd his mission, participatine in hymn-singing (kirtan), and working endlessly to feed the crowds that came to listen to her husband.

One day, when Guru was approximately 30 years old, the day of destiny came. Nanak sat in meditation at the bank of the Vanyi river, when he heard God\'s call to give his life for world up-lift by guiding men on the right path to Him."\' Nanak resolved to obey the call immediately. After three days in prayer, he emerged saying "There is no Hindu, no Moslem." Then he returned to the place of employment, resigning his post. He gave away all he had to the poor and prepared to set out on loot to bring his teachings to the world at large. Many authors have described this incident. Mata Sulakhani is reported to have complained of his absence to her sister-in-law. Most writers make this appear as a negative incident, with the wife whining and being unreasonable. However, one must ask, was it indeed unreasonable? Any woman would worry if her husband suddenly disappeared for three days. What the incident demonstrates is that Sulakhani had enough self-esteem and courage that she was not afraid to speak to her sister-in-law. In the customs of those days, that was not easily done. Mata Sulakhani took the initiative to tell Guru Nanak\'s family as well as her own, that he was missing. How they all must have rejoiced when he reappeared three days later.

Throughout this period, though he lived a relatively quiet life, Nanak continued to question Brahmin rituals and to rebel against them. He became quite well-known. His sister Bebe Nanaki and Rai Bhullar, the Choudhry of the area, proclaimed him "Messenger of God." His following grew. It is about this time that he met Mardana, a minstrel from Talwandi, who soon became his friend and confidante. They spent many evenings together, composing and singing sweet hymns to God. One Bhai Bhagirathi also came from Mailasi, near Multan, and stayed with him for a while, as a sort of disciple. Nanak\'s teaching life was beginning. At this point, Nanaki gave him a rabab, or rebeck, a musical instrument with which he accompanied himself in singing hymns of praise of the one true God. A rahab was a stringed instrument, which was of Arabian origin, and was very popular in Northern India at the time. It had four to six strings made of goat gut, with corresponding steel strings underneath which provided resonance. It looked somewhat similar to our modern mandolin. With time, it fell into disuse in India, though it remains popular in Arabic music. In providing her brother with a rahab, and later his companion Mardana with another, Nanaki helped Guru Nanak establish a musical tradition in the Sikh religion from the very start.

Nanak\'s disregard for Brahmin rituals must have caused havoc in his private life. All his piety did not impress his parents who did not understand what they considered to be his rebelliousness. His father-in-law would have preferred a more conventional mate for his daughter. While everyone around them lived in a joint family arrangement, Nanak, his wife and children lived separate from all. Every time he refused to observe Brahmin ritual, every time he scorned an acccpted custom or tradition, it would have been Sulakhani who would have had to face the scorn of her neighbours and family. Still, he was consistent in denouncing any injustice, any custom based on caste, any tradition that discriminated against any one at all. On the other hand, Sulakhani had the benefit of listening to his preaching and his discussions with many strangers. She did not travel with him, as their children were very young when he went way. Travelling was most difficult in those days. But she did most certainly benefit by listening to the many people who constantly came to her house, seeking to hear the Guru speak. It was an education that should be envied by many.

When his time had come in 1539, he chose to leave responsibility of his mission with a devout disciple, Bhai Lahina. Historians have recorded that the Guru\'s wife objected strongly to his choice. Their eldest son, Shri Chand had a reputation of saintliness, and was respected and liked by all. Like many others, Sulakhani had expected that he would be the rightful heir. She went to the Guru with her two sons and asked what would become of her and them, if Lahina was to be named the second Guru. Nanak replied simply that she should put her trust in God. Was Sulakhani impertinent or did she show ignorance by asking this question ? I think not. On the contrary, at a time when women were completely subjugated by men, none would dare to question their husband\'s decisions. Here we see proof positive that Guru Nanak did indeed have high regard for his family. He must have heen very respectful to his wife; so much so, that she had the freedom to ask what she felt was important. Her self-esteem allowed her to find the courage to seek answers when she had a question. In his answer, Guru Nanak was not rebuking her or putting her down. He had made a decision. Lahina was better suited to be the next Guru. It was a very simple statement; the rest was up to God. Early writers have recorded that after Guru Nanak\'s death, Sulakhani spent the rest of her life in Kartarpur, contributing as always to the establishment of Sikh values and traditions.
Mata Sulakhani kept Guru Nanak Dev Ji\'s teachings alive in the community when he was away. She did all the household chores herself. Nothing was beneath her. Guru Nanak was committed to the equality of women right from the very beginning and he first trained women to take their equal share of responsibility of this new religion.
In 1969 Sikhs celehrated the 500th birth annivcrsary of their founder. Much research was done at that time and some literature was produced. Professor Sahib Singh has written that: "Bhai Jai Ram was resident of Khanpur and was in the service of Nawab Daulat Khan. For his official work, he used to go to Pakhoke village. There he talked to Shri Moolchand for the marriage of his daughter, and he readily agreed to it. Guru Nanak was engaged on Visak 5, 1542, vs, and the marriage took place on Harh 24, 1544 vs. Guru Nanak was 18 years old at the time of marriage." Sulakhani must have been about 14.
Back
Comments:
नवरात्री Navratri
श्री दुर्गा कवच
Free Kundali Predictions
Todays Panchang
Calulate Your Rashi
Free Tarot Reading
Astro Remedies
Buddhism
Nakshatra Characteristics
श्री साईं बाबा Shri Sai Baba
राशिफल Horoscope
Calculators
जन्मदिन विवरण Birthday Details
स्वप्न विश्लेषण Dream Analysis
प्रश्नावलियाँ Prashnavalis
व्रत & पूजा विधि Vrat & Pooja Vidhi
आरती संग्रह Aarti Sangrah
चालीसा संग्रह Chalisa Sangrah
स्तुति संग्रह Stuti Sangrah
स्त्रोत्र संग्रह Strotra Sangrah
मंत्र संग्रह Mantra Sangrah
कवच संग्रह Kavach Sangrah
सुन्दरकाण्ड Sundarkand
नामावली संग्रह Namavali Sangrah
Vedas
Spiritual Books
Pilgrimage in India
Sms Collection
Thoughts
Inspirations
Baby Names
Palmistry Tutorials
Vastu Shastra
Feng Shui
Yearly Festival Calendar
Vegetarian Restaurants
Vegetarian Recipes
Essays
Explore Myguru
Status
Kanwar Yatra(कांवड़ यात्रा)
धार्मिक स्थल
Gurudwaras(गुरूद्वारे)
अदभुत धार्मिक स्थल
विशेष धार्मिक स्थल
मुख्य धार्मिक स्थल