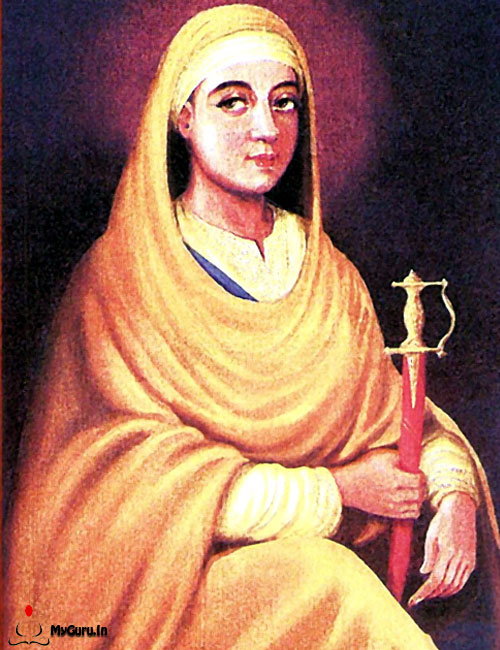 Mata Sundari was the daughter of Ram Saran of Lahore, and wife to Guru Gobind Singh. The couple had four children together: Ajit Singh, Zorawar Singh, Jujhar Singh and Fateh Singh.
She holds a special place in Sikhism for the role she played in leading Sikhs after the ascension of Guru Gobind Singh Ji. a Kumarav, belonged to the Khatri clan and resided in Bijvara, known in modern times as Hoshiarpur in Punjab.

History
Marriage to Tenth Guru:
Ram Saran met Tenth Guru Gobind Rai after being newly converted to the budding Sikh faith and offered his daughter Sundri in marriage. The 18 year old guru had already wed Mata Jito ji nearly seven years earlier, however the young couple had no children born of their union. Perhaps for this reason the mother of the tenth guru, widowed Mata Gujri, urged her son to accept the marriage offer. The tenth guru agreed to respect his mother\'s wishes and advice. Nuptial ceremonies took place on April 4, 1684 A.D. in Anandpur and Sundri became the wife of Guru Gobind Rai, and co-wife to Jito ji, her predecessor in marriage to the tenth guru.

Mother of Tenth Guru\'s Eldest Son
During her third year of marriage, on January 26, 1687 A.D. Mata Sundri gave birth to the first son of Tenth Guru Gobind Rai in Paonta. The couple named their son Ajit, which happened also to be the proper name of Guru ji\'s first wife, and Sundri\'s co-wife, Mata Jito ji.

Family Life:
Little has been specifically recorded about Mata Sundri, after the birth of her son Ajit, until later years. Her co wife, Mata Jito ji, gave birth to *three sons:
Jujhar - March of 1691 A.D.
Zorawar - November of 1696 A.D.
Fateh - February of 1699 A.D.
Based on the activities, and her leadership role later in life, and the fact she is often refereed to as Sunadri Kaur, it seems reasonable to assume that Mata Sundri also became initiated as Khalsa on Vaisakhi of 1699 along with Tenth Guru Gobind Singh, his first wife Ajit Kaur, his mother, and his four sons, the sahibzade princes.
Mata Sundri\'s co-wife Mata Jito ji passed away in December of 1700 A.D. Unusual circumstances resulted in Guru Gobind Singh accepting a marriage proposal, and he wed Sahib Devi in April of 1701 A.D.

Events
In the year 1705, Mata Sundari Kaur and Mata Sahib Kaur endured the seven month siege of Anandpur and on December 5, fled besieged Anandpur along with the Guru\'s entourage. They became separated from the Guru\'s mother Mata Gurjri and the two youngest sahibzade. The elder sahibzade remained with their father and his warriors while Mata Sundari Kaur and Sahib Kaur made their way to Ropar, where they stayed overnight. The next day with the help of Bhai Mani Singh, the tenth guru\'s wives made their way to Delhi where Jawahar Singh took them in and gave them shelter. Over the next several weeks all four of the sahibzade and the guru\'s mother became martyrs, however months passed before they received word of the tragic events or or the guru\'s whereabouts.

Historic Events Of 1705
Eventually Mata Sundri and Mata Sahib Kaur joined Guru Gobind Singh in Damdama Sahib where they received the tragic news of the sahibzades martyrdom. The women accepted the transformation of their maternal role with fortitude and embraced taking charge of the Khalsa panth with zeal
The Guru soon departed from Talvandi Sabo for Deccan to meet with Mughal Emperor Araungzeb and the wives returned to Delhi where Mata Sundri remained. While on his travels Guru Gobind Singh discovered a newborn baby boy abandoned by his mother and put the infant in the care of a goldsmith had asked the guru for a male heir. Sometime later, Mata Sundri adopted the babe and named him Ajit Singh.
Mata Sahib rejoined the tenth Guru at Nanded (Nander) and stayed with him until his death in 1708, after which she returned to Mata Sundri. The widows of Guru Gobind Singh remained together thereafter. They resided permanently in Delhi under the protection of Mata Sahib Kaur\'s brother Bhai Sahib Singh, Bhai Kirpal Chand, the brother of Mata Gujri, and Bhai Nand Lal, a poet formerly of the tenth guru\'s court.

The widowed Mata Sundari Kaur assumed a leadership role among the Sikhs and requested Bhai Mani Singh to collect and compile the written works of the tenth guru, to scribe new copies of the Guru Granth Sahib, and to assume charge of Sikh shrines in Amritsar. Over the next 40 years for the remainder of her life, Mata Sundri acted as the guru\'s emissary counseling the Khalsa, issuing hukamnana proclamations, and writing letters of encouragement dated between October 12, 1717 and August 10 1730.
Mata Sundri took responsibility for raising a boy Jassa Singh Ahluwalia. When he came of age she put him under the charge of Kapur sing a lead of Dal Khalsa reginment. Jassa Singh grew to be a renowned warrior defeating the Afghan Mughal army in Lahore and minting coins.

Mata Sundri arranged a marriage for Ajit Singh whose wife gave birth to a boy Hathi Singh. Both father and son emulated the late Guru Gobind Singh, but rather than respecting the holy scripture Guru Granth Sahib as the tenth gurus successor attempted by turns to set themselves up as the late guru\'s heir:
Mata Sundri renounced Ajit Singh as an imposter. Ajit Singh gained the support of the Mughal Emperor Bahadar Shah who encouraged his arrogance honoring him with a ceremony in September of 1710. A blunder ultimately earned the displeasure of the emperor and resulted in Ajit Singh cutting his hair, to save his skin. Through she refused to see him, Ajit Singh periodically appealed to Mata Sundri for financial support to provide for his family, which she gave. Ajit Singh\'s involvement in the death of a Muslim faqir aggravated Mughal authorities resulting in his arrest and execution on January 18, 1725.
Mata Sundri left Delhi with Ajit Singh\'s son, Hathi and his mother. They traveled to Bhagatghar, where they were refused admittance our of fear of reprisal, and on to Mathura where the were received with honor, and where Hathi grew to manhood. Like his father before him, Hathi attempted to set himself up as guru, even going so far as to replace Guru Nanak\'s name with his own, in a copy of Guru Granth Sahib. Disgusted with his behavior Mata Sundri. Left him and returned to Delhi. Hathi died without issue in Burhanpur where he fled during a Mughal invasion led by Ahmad Shah.
Mata Sundri lived out the remainder of her days in Delhi, where with the help of Raja Ram she repossessed her former home.

Joti Jot
Mata Sundari Kaur breathed her last in 1747 A.D. There are at least two memorial gurdwaras which commemorate her life and death
Mata Sundri Gurdwara of Delhi commemorates the location of the home where Mata Sundari Kaur lived with Mata Sahib Kaur.
Gurdwara Bala Sahib is a memorial constructed to honor Eight Guru Har Krishan and is the location of the cremation sites of both Mata Sundri who died in 1747, and Mata Sahib Kaur who died soon after.
In an attempt to rewrite history, several modern historians have ignored, or misconstrued, evidence supporting the fact that Guru Gobind Singh wed three wives in his lifetime, in favor of promoting their opinion that the guru\'s three wives were one woman, an agenda which dishonors the guru and the illustrious mothers of his sons, and the Khalsa nation